The 12 Longest Land Borders In The World 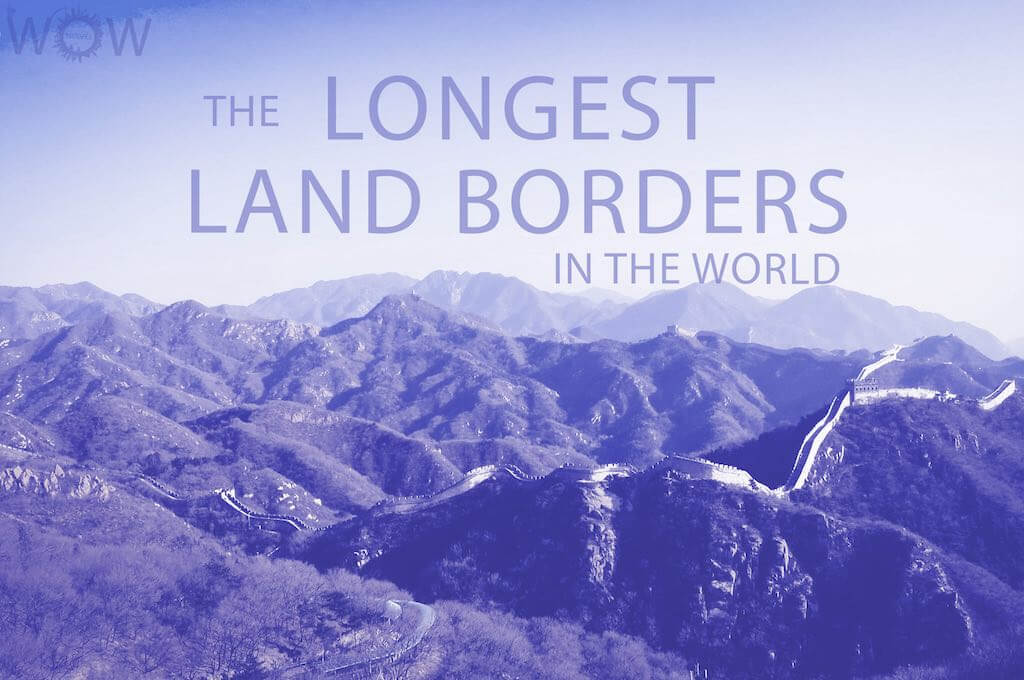 So which countries share the longest land border in the world? Many countries around the world are landlocked and share borders with one or more neighbors. While China and Russia have the most number of neighbors and land borders that extend thousands of kilometers, there are other nations like the Vatican which are so small, its border doesn’t even go into double digits. Brazil, on the other hand, touches almost every South American nation, barring Ecuador and Chile, which gives it an extensive border area of 16,145 kilometers. The borders that some countries share with their neighbors are so lengthy, and cover such varied terrain, that keeping a close watch on these areas is a Herculean task for the security forces which patrol these areas. Listed below are some of the longest land borders in the world shared between two countries.

The border area between Afghanistan and Pakistan is a highly dangerous border region. It was demarcated in 1893, by the Durand Line which runs for 2,200 kilometers. Though the Durand line is internationally accepted as the western border of Pakistan, Afghanistan refuses to acknowledge it as the international border between the two countries. As such, there is very little government control in the region leading to unchecked or uncontrolled movement across the border. Pakistan is in the midst of constructing a border barrier to restrict the infiltration of militants across this border. Still wondering why people would still visit this part of the world? You can read our list of top things to do in Afghanistan to find out.

One of the most porous borders of the world is the Mexico United States border which sees over 350 million legal crossings annually. At the Tijuana border, there are approximately 50,000 vehicles and 25,000 pedestrians who use this entry every day. The busiest border of the world which extends over 3,145 kilometers has been the subject of much controversy in recent times with the deportation of thousands of illegal immigrants back to Mexico.

Ever since it came into existence in 1947, the border between India and Pakistan has seen countless conflicts. The 3,323km boundary between the two nations begins from the Line of Control in Kashmir in the north and continues to Zero Point between the Indian state of Gujarat and the Sindh province of Pakistan. Considered one of the most complex and dangerous borders in the world, the border is visible from space at night because of the 150,000 floodlights installed by India.

The 3,423-kilometer-long border between Bolivia and Brazil crosses a variety of terrains; passing through inhospitable deserts, forests and urban areas. Beginning at Pantanal and ending in the Amazon rainforest while passing through Corumba, Mato Grosso do Sul and Assis Brasil in Acre. The first border treaty between the two countries was signed in 1867 but was the subject of much dispute in later years because of Acre which was mistakenly demarcated as a part of Bolivia. The dispute was finally settled in 1903 with the Treaty of Petropolis in which Bolivia ceded Acre to Brazil.

Much of Mongolia’s 3,845km long border with Russia was established by the Treaty of Kyakhta in 1727, but the modern border was shaped in 1911making it one of the longest land borders in the world. During the Mongolian Revolution of 1911, the tiny state of Tuva separated from Mongolia and became an independent country in 1921. Tuva was eventually annexed into the Soviet Union in 1944, forming the current border. The endpoints of the eastern and western parts of the border are ‘tripoints’ that are shared with China. There are ten official crossing points along the border, two of which are railway crossings.

The Sino India Border referred to as the Line of Actual Control (LAC) includes the western sector of the border region as well as the McMahon Line in the east. Certain parts of the 3,488-kilometer-long border have been the subject of much dispute especially at Aksai Chin and the state of Arunachal Pradesh in India, which China claims as its own. In 2013, a three-week standoff between the troops of the two countries resulted in both nations signing a border defense cooperation agreement.

The Sino Russian border consists of two non-contiguous sections; eastern section which is much longer and the shorter western section. The eastern border extends over 3,500 kilometers beginning at the eastern China-Mongolia-Russia tripoint and ends at the Tumen River. The western border between Xinjiang in China and the Altai Republic of Russia is less than 100 kilometers in length and mainly covers the snow-covered region of the Altai Mountains.

The highly porous border between Bangladesh and India which spans a length of 4,096kms has seen numerous infiltrations of people into the Indian territory from Bangladesh. The border runs along the boundaries of five Indian states in the northeast of the country and 6 divisions of Bangladesh. Certain areas of the border have fences but because of the geographical barriers, it has been impossible to erect border fences everywhere.

Mongolia shares an extensive boundary with both China and Russia, but its border with China is much longer at 4,677 kilometers. This border touches both the Mongolia-Russia border and the China-Russia border with the eastern end encompassing a part of the Gobi Desert, while its western end is located just 55km from the Kazakhstan-Russia border.

The border between Argentina and Chile is the longest international border in South America at 5300 kilometers, definitely one of the longest land borders in the world. Although Chile is much smaller than Argentina, it’s length along the southwestern part of South America has resulted in this extensive border. The Boundary Treaty of 1881 signed between two countries laid the groundwork for demarcating the borders for almost all of Chile’s and Argentina’s shared border.

The international border between Kazakhstan and Russia is the longest continuous international border in the world spanning a distance of 6,846 kilometers. The existing border took shape in 1930 but only became an international border when the USSR was dissolved in 1991. This posed some problems for the railway line as one branch of the Trans-Siberian Railway had to go through two border crossings. In 2017, the two countries agreed to allow transit trains without border control.

The longest international land border in the world between two countries, Canada and the United States, is officially known as the International Boundary. The extensive boundary also includes the border that Canada shares with Alaska. A total of thirteen U.S. states and eight Canadian provinces and territories are located along the border. Throughout history, the border has undergone several changes with various treaties being signed. However, on April 11, 1908, the Treaty of 1908 was signed between the United Kingdom and the United States to survey and delimit the boundary between the two North American countries through the St. Lawrence River and Great Lakes.