The 13 Biggest Pride Parades In The World 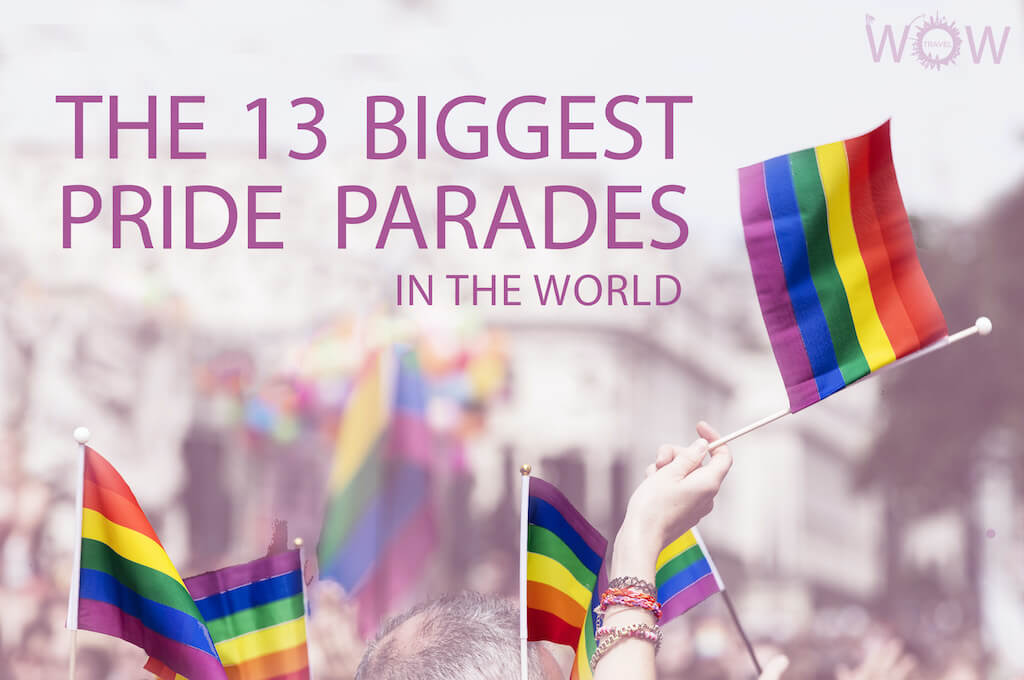 Many of the biggest pride parades in the world started small. From just a few hundred participants in the olden days, today’s pride marches draw hundreds of thousands to millions of people. The festivities are usually held in June, which is LGBT Pride Month. Many major cities all over the planet hold their own pride festivals to advocate for LGBTQ rights. In addition, live entertainment, street parties, and parades take place to celebrate the LGBTQ community’s achievements. Here, we check out some of the largest gay pride parades in the world. Also, take a look at excellent gay-friendly hotels that you can use as a base to celebrate Gay Pride in comfort.

Unlike many other pride events, Amsterdam Pride didn’t start out as a call for equal rights for LGBT people. This is probably because the Netherlands is one of the most LGBT-friendly countries on the planet. In fact, it was the first to legalize same-sex marriage, which took place between two men in Amsterdam. The city’s gay pride festival usually happens on the first weekend of August, with cultural and sports events as well as street parties. Amsterdam Pride’s highlight is the much-celebrated Canal Parade. Revelers gather in the city’s streets to cheer as decorated boats glide through canals and the Amstel River.

Sometimes held in September, sometimes in October, the Rio de Janeiro Gay Pride Parade is always a cheerful affair. The first parade took place in 1995, and every year there are different themes. For instance, in 2019 the theme revolved around the topics of democracy, freedom, and rights. The parade traditionally starts on Copacabana Beach and passes through Avenida Atlantica. Some neighborhoods stage their own mini-parades along with the main one. Festivities last well into the night, and it isn’t unusual to dance in the streets until dawn breaks.

Pride Toronto boasts one of the largest gay pride parades in the world. Every year, great crowds fill the streets to celebrate the diversity of the Greater Toronto area’s LGBTQ community. Festivities abound, including concerts, dance parties, and entertaining shows by drag queens and kings. The main events are the Trans Pride celebrations, the Dyke March, and of course, the magnificent Pride Parade. Toronto closes almost 2 dozen city blocks to vehicular traffic to accommodate the parades and marches.

Also called the Marche des Fiertés LGBT, Paris Pride occurs in late June. It’s one of the biggest pride parades in the world, with 800,000 participants in 2010 alone. Every year, hundreds of volunteers come together to organize this popular event in the capital of France. Around 50 festive floats traverse the streets of Paris, starting from Montparnasse up to the Place de la République. After the parade, the party continues in Le Marais, the city’s vibrant gay district.

This event-filled celebration takes place every year in the second half of July to fete members of the LGBTQ community and their allies. Also called CSD Berlin (Christopher Street Day), it’s organized by the Berlin LGBT Pride Association. The first CSD Berlin happened in June 1979, and attendance has been spiking steadily since then. The parade begins at the corner of Kurfürstendamm and Joachimsthaler Strasse and finishes at the Brandenburg Gate. Before and after the parade, revelers will have no shortage of parties celebrating LGBTQ culture to go to.

From 20,000 participants in 2003 to 200,000 in 2019, the Taiwan Pride Parade is the largest of its kind in Asia. The 2019 parade was particularly joyful since same-sex marriage was only legalized in Taiwan earlier that year in May. Taiwan Pride celebrations take usually take place on the last Saturday in October in the capital city of Taipei. Famous celebrities in Taiwan put on shows to show their support to the LGBTQ community. Plus, there’s no shortage of parties over the pride weekend.

Summertime in the English capital becomes extra festive with the Pride in London Parade. Thanks to the tireless efforts of volunteers, it’s the biggest pride event in the United Kingdom. The annual parade takes place along the West End; the city closes the world-famous shopping haven Oxford Street to traffic for it. In Trafalgar Square, hundreds of performers treat Pride in London attendees to free performances. There are also plenty of food and drink vendors, exhibitions, and community stalls.

The largest LGBTQ event in Germany, this parade takes place during the Cologne Pride celebration in June–July every year. It starts at noon on Deutzer Brücke and ends at Marzellenstrasse in the heart of the city. Cologne takes on a carnival-like atmosphere during the parade, with marchers in colorful and elaborate costumes. Just as popular is the Christopher Street Day (CSD) festival, which showcases glamorous performances and inspiring talks.

Hundreds of thousands of LGBTQ community members and their allies take part in Tel Aviv‘s Pride Parade each June. This bustling city in Israel ranks among the top gay-friendly cities on the planet. So it’s no surprise that it’s also home to one of the largest pride parades in the world. The march starts at Meir Park and ends in Charles Clore Park. To celebrate the end of the parade, a festive party takes place in the park, featuring some of the best DJs around.

More than a million people gather in San Francisco during the last full weekend of June every year to celebrate LGBTQ rights. This world-renowned parade takes place on Sunday morning and lasts until around 4:00 PM. Various groups including Dykes on Bikes and PFLAG (Parents, Families, and Friends of Lesbians and Gays) are prominent in the parade. Dance stages, booths, and vendors are also part and parcel of the festival.

Inaugurated in 1992, EuroPride takes place in a different city in Europe each time. Celebrations can last up to a month and the event winds up with a parade. Madrid hosted the biggest Europride event in 2007, with over 2 million participants.

Madrid also has its own homegrown annual gay parade, the immensely successful Orgullo Gay de Madrid (MADO). From its modest beginnings in 1978, MADO today is one of the biggest pride parades in the world. It’s held every year on the weekend right after the International Day of LGBT Pride. More than a million people throng the streets of Spain’s capital to take part in the festivities.

Aside from one in Rio de Janeiro, Brazil is also the home of the São Paulo Gay Pride Parade. This extravagant spectacle set a Guinness World Record in 2006, with 2.5 million participants. Since then, attendance has never failed gone below 3 million. The parade route stretches over 4 km along the Avenida Paulista, starting at the Museum of Art of São Paulo and ending at Praça Roosevelt. Complementing the parade are live music, ostentatious floats, and raucous parties in LGBTQ clubs.

World Pride maintains its position as the biggest pride parade in the world. Established in 2000, the event takes place in different cities every year. In 2019, New York City broke records when it hosted the World Pride Parade. This was also the 50th anniversary of the Stonewall Uprising, the spark that lit the flame of the gay rights movement. A staggering 5 million people attended this edition of the World Pride Parade, and among the activities during the event were concerts, film screenings, and street fairs.

The Big Apple also hosts the annual NYC Pride March, which is always a huge success. Members of the LGBTQ community and their allies march through Lower Manhattan, cheered on by spectators. NYC Pride March ranks as North America‘s largest pride parade, with 2 million or so participants each year.