Top 10 Things To Do In Buenos Aires 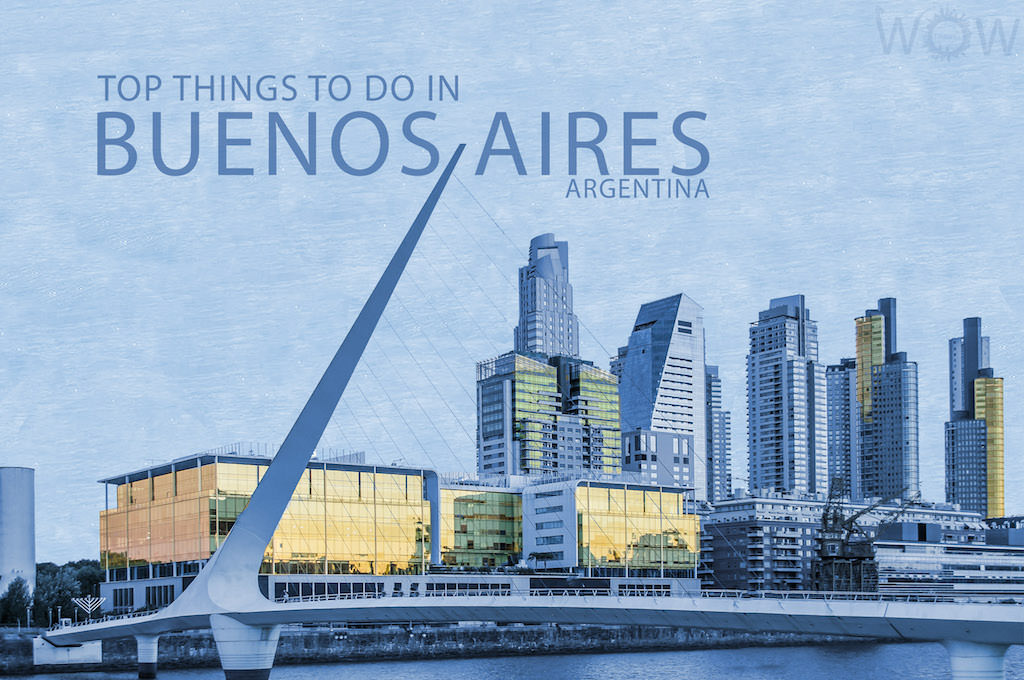 First established by the Spanish in 1536, The capital and largest city of Argentina, Buenos Aires, is a magnificent city. You will find impressive architecture, fine dining, world-renowned nightlife, and a big emphasis on culture, literature, art, Tango and music of all forms. Buenos Aires is part European, part Latin American filled with new boutiques, galleries, and cafés all the while preserving its past. The “Paris of Latin America,” is easy to love and hard to forget. WOW Travel presents you its Top 10 Things To Do In Buenos Aires.

Since 1908, The Teatro Colón is the main opera house in Buenos Aires, Argentina. It is ranked to be amongst the five best concert venues in the world.

Located in the Palermo neighborhood, the Botanical Garden is triangular in shape, and home to more than 5000 species of plants. The garden features three different distinct gardens: the Roman, French and Oriental gardens. Entrance is free.

Open daily from 8am to 6pm, the Recoleta Cemetery, located in the northern part of barrio Recoleta, is most famous for being the burial ground of María Eva Duarte de Perón, but it actually holds the most important Argentine historical figures such as military leaders, presidents, scientists and poets.

This extraordinary artistic heritage museum, makes it the largest public collection in Latin America. Among its more than 12,000 pieces, two collections stand out: the collection of 19th-century European art, considered the most important in the region, and the collection of Argentine art, beyond any doubt the most valuable of its kind worldwide.

Stands in the Plaza de la Republica, the Obelisco is 67 meters (220 ft) and it is Buenos Aires’ most famous monument. It was built to commemorate the fourth centenary of the first foundation of the city. Can’t get enough of the view? Stay at one of the 11 Best Hotels in Buenos Aires.

The chic, sprawling district of Palermo is home to some of Buenos Aires’ hippest clothing and design boutiques, restaurants and art galleries.  Palermo District is divided into 3 parts: Alto Palermo, Palermo Chico, and Palermo Viejo (which is further broken into Palermo Soho and Palermo Hollywood). Alto Palermo is known for its museums and urban parks, Palermo Soho has become the city’s most fashionable neighborhood with high-end boutiques, bustling cafés and bars, and cobble-stoned streets. and Palermo Hollywood is home to the trendiest restaurants, outdoor markets and home to TV and other media companies in Buenos Aires.

La Boca is the most historic district in Buenos Aires. It is the old port that saw the entry of millions of immigrants into Buenos Aires as they flocked from Europe to the New World. It was here that the city began its 20th-century boom. Today La Boca is a colorful center of art with restaurants and colorful metal houses, especially along the ‘Caminito street’. La Boca is also the birthplace of Argentine Tango, Argentine pizza and home to the famous ‘Boca Juniors’ soccer club.

One of Buenos Aires’ oldest and most bohemian neighborhoods, San Telmo is a mix of old-world charm and edge with cobblestone streets, strong tango culture and cozy family-owned restaurants. It is a well-preserved area of the Argentine metropolis and is characterized by its colonial buildings. Plaza Dorrego is a famous square, located in the center of the neighborhood, where you can sit back, watch some tango, and enjoy a delicious ‘café con leche’. Every Sunday there is an open-air market with more than 300 vendors selling almost everything under the sun.

Occupying a significant portion of the Río de la Plata riverbank, Puerto Madero (The city’s newest district) is paradise for modern architecture lovers with the most modern and the latest architectural trends in the city of Buenos Aires including impressive high-rises, modern parks and great restaurants. It is one of the most known urban waterfront restoration projects in the world and home to the famous bridge ‘El Puente de la Mujer’ that was designed by Spanish architect Santiago Calatrava.

“Plaza de Mayo is famous and politically significant square in Argentina’s capital, Buenos Aires. Established in 1580 and once known as Plaza de la Victoria, it was renamed as Plaza de Mayo in the nineteenth century following the May Revolution. Plaza de Mayo literally means “May Plaza”, a reference to the site’s importance during the May Revolution. This revolution was made up of a series of peaceful events mostly in 1810, one of which took place at Plaza de Mayo, following which the Argentineans elected their first local government not allocated by Spain. Plaza de Mayo also contains the May Pyramid, a statue commemorating the May Revolution and Argentina’s independence from Spain, installed in 1811.  Overall, Plaza de Mayo is an important focal point for political life in Argentina and is where most of its political institutions are housed, including the Casa Rosada from which Eva Peron or “Evita” addressed the people and city hall. The Metropolitan Cathedral of Buenos Aires can also be found here.” Source: historvius.com