Top 10 Things To Do In Modena 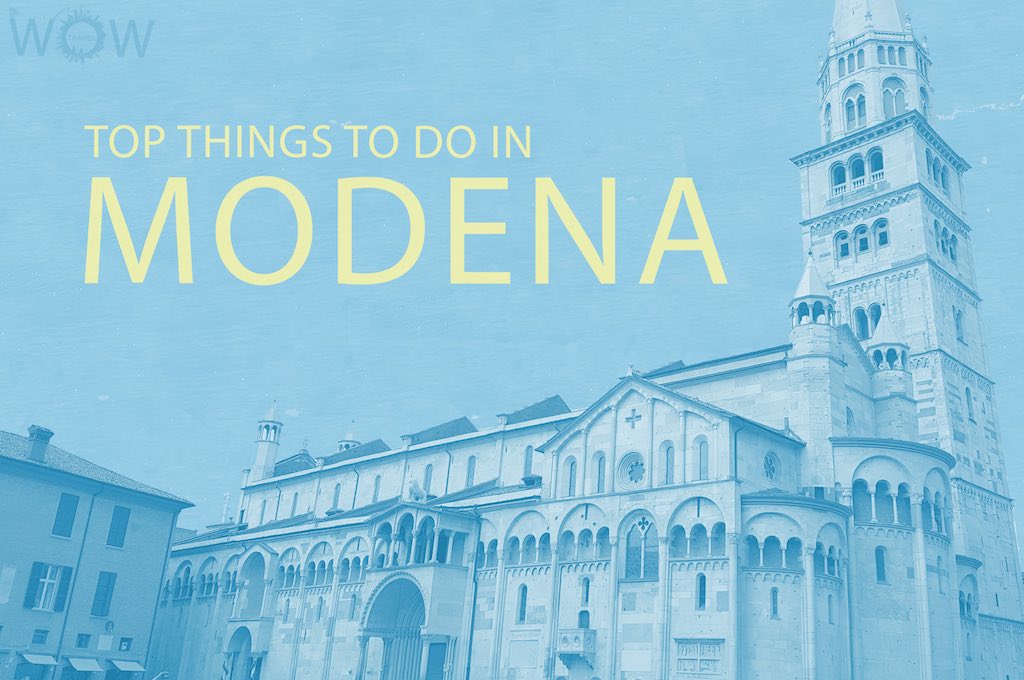 Located in the Emilia-Romagna region near Bologna in Northern Italy is Modena, a small city known for its importance in the automotive industry, its world-class cathedral, and its contribution to the culinary industry. If you ever find yourself in the quaint and unique town, here are just a few things that you can do.
Booking.com

Known as the Modena Cathedral in English, this building is a beautiful Romanesque style church which was officially completed in 1319. The cathedral was dedicated to St. Geminianus and it features rose windows, and two lions supporting the entrance of the building. In 1997, the church as a UNESCO World Heritage Site.

The Enzo Ferrari Museum was established in 2012 to honor one of the most significant contributors to the automobile industry, Enzo Ferrari. The museum focuses on and celebrates the life and work of the founder of the Ferrari sports cars. The complex includes two buildings, one which was Enzo’s home, and the other, the structure housing the car collection.

Piazza Grande is one of the main squares in the city center of Modena. Surround it is the Modena Cathedral and the Ghirlandina Bell Tower, the Palazzo Comunale, and the Archbishop’s palace. It is usually the location of many events happening in the city, from political rallies and celebrations to races and exhibitions.

The Albinelli Market is an indoor market that was built in 1931 to accommodate the market in Piazza Grande. Many different kinds of food can be found at the market including cooked, fresh produce and meat. The market opens its doors at 6:30 a.m. and an average of 30,000 visitors go there every week, so it is advised to go as early as possible.

The Ghirlandina Belltower is an 87-meter-tall tower named after the two ghirlandes (marble railings) located at the top of the tower. Standing adjacent to the Modena Cathedral, the tower was constructed in 1179 to compete with the towers in nearby Bologna. Visitors are able to climb to the top of the tower where they can see amazing views of the city and nearby countryside.

The Giardini Pubblici is a public garden located in the northeastern region of the city of Modena. The grounds feature an ornate palace with manicured lawns and a variety of exotic flowers. There is also an on-site café for those wanting to grab a bite, as well as an art gallery.

The Ducal Palace is a Baroque-style palace which was designed by Bartolomeo Avanzini. The palace was once the site of the Este Castle, the residence of the Dukes of Modena for over two centuries. Today, it is the location of a section of the Italian Military Academy, a library, and a military museum. Tours are conducted on Saturdays and Sundays only upon reservation.

Modena is known for its squares, and Piazza Roma is one of them. Old buildings including the Palazzo Ducale surround the piazza. There are also numerous shops, café’s, and stalls lining the arches. The main feature of the square is the statue of Ciro Menotti, a revolutionary leader during the 1800s.

The Luciano Pavarotti Municipal Theatre is an opera house which first opened in 1841 as the Teatro Comunale di Modena. After the death of the great tenor Lucian Pavoritti, the theater was renamed to pay tribute to the resident. It features a neoclassical façade and a large chandelier hanging from the hand-painted ceiling.

The Estense Gallery, also known as Galleria Estense, is an art museum located in the same building as the Palazzo dei Musei. Its collection consists mainly of Italian paintings and sculptures from the House of Este who once rules the city.