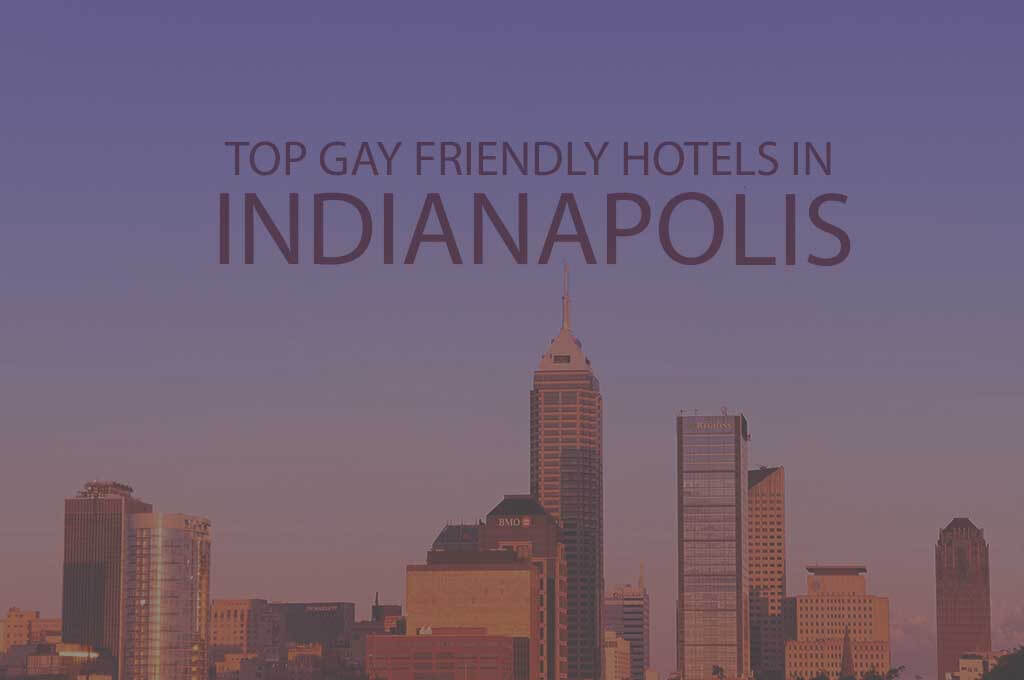 Indianapolis, Indiana’s capital, is a boisterous and bustling city with lots of Midwest flavor and incredible history. The city was originally intended as a river port city, but it has become a nucleus for industry, culture, and arts in the region. What’s more, Indianapolis has had a sizeable LGBTQ population since the 1980s and has been a critical center for the gay community in the midwest. In fact, there is a growing number of gay hotels in Indianapolis that have long been welcoming LGBTQ travelers to this city. And even though there are fewer exclusively gay clubs and bars than in the past, Indianapolis’ gay scene is still one of the most thriving in the American Midwest. Today, these fun and lively nightspots around the city draw both gay and straight crowds.

What’s more, Indiana’s capital city also has many things to do, from a sprawling zoo and great restaurants to amazing breweries. It’s no wonder that the city is so popular with the gay travel set, as it offers a wide range of activities and things to see and do. To that end, here are the 11 best gay hotels in Indianapolis.

The Omni Severin Hotel is not just one of the best boutique Indianapolis hotels, but it’s also one of the best gay hotels in Indianapolis. What’s more, it happens to be the longest-running hotel in downtown Indianapolis! If that wasn’t enough, it’s a 15-minute walk to the gay bars on Mass Ave. Back at the hotel, the ambiance is of 1900s grandeur, which discerning gay travelers with a thing for theatrics will love. The amenities, on the other hand, are all very modern. So, LGBTQ travelers who love all the bells and whistles will certainly appreciate this one. Furthermore, it has an excellent heated indoor pool where you and your partner can cool off. And if you have a thing for fitness, there’s the well-equipped fitness center.

The JW Marriott Indianapolis is, without a doubt, one of the best luxurious Indianapolis hotels. Since it’s gay-friendly, discerning travelers looking to splurge on an Indy vacation will love this hotel. Plus, it’s just a 20-minute walk from Mass Ave’s gay bars and clubs. This 33-storied structure has a sleek and curved exterior, with more than 1,000 rooms on the inside. Thanks to floor-to-ceiling windows, you can spy gorgeous views of the city and beyond. If you really want to splurge, book the skyline-view suite to really admire the city.

The hotel is not just about postcard-perfect views; it also has a gym stocked with machines and free weights. Moreover, there’s also a fine-dining Italian eatery Osteria Pronto and a buzzing sports bar, High Velocity. When you’re not spending time in your jaw-dropping room, enjoy craft beer at the bar and wind up the day with pasta at the restaurant.

Hilton Indianapolis Hotel and Suites lies just off Monument Circle and is one of the most convenient gay hotels in Indianapolis. Step out of the hotel, and you’re just a short walk from some of Indy’s best sights and its gay scene. Once you’re done exploring and filled to the brim with culture, return to your contemporary and spacious accommodations. The plush rooms and suites at this AAA three-diamond property have state-of-the-art mod-cons and impeccable service. Plus, the hotel has the bonus of being pet friendly! You have everything under one roof at the hotel, including drinking and dining. For on-site dining, there are two options, McCormick & Schmick’s and 120 West Bar & Grill. The former serves delicious and ultra-fresh seafood, after which you can enjoy a nightcap at 120 West Bar & Grill. And, of course, there’s a fabulous indoor pool where you can swim and cool off.

When the Union Station in the city first opened in 1853, you could catch a train to any destination in the United States. Today, this National Register-listed historic train station is home to the Crowne Plaza Indianapolis, whose nostalgic floor plan beautifully integrates much of the structure’s original architecture. For instance, the ornate Grand Hall is now a meeting room. Meanwhile, many old Pullman railcars have now been repurposed into gorgeous period rooms with modern furnishings that travelers, especially those who love characterful digs, will love.

This award-winning, full-service hotel allows you to sleep in an authentic Pullman Train car sleeper. The furnishing’s color theme is much the same, but everything else is updated. The rest of the hotel is much the same, with additions such as the indoor pool making for a welcome change. In fact, it’s one of the best Indianapolis hotel pools. Wrapping up the amenities are a sports-themed lounge and the 123 West & Taggart’s Restaurant, which serves traditional American cuisine.

Conrad Indianapolis is one of the best gay hotels in Indianapolis. The hotel lies somewhere between a luxury hotel and a gallery and is perfect for gay travelers with a penchant for the artistic. For instance, the second-floor public space features work by local artists. Meanwhile, the adjoining Long-Sharp Gallery has Pablo Picasso, David Hockney, and Andy Warhol pieces. If you want to wake up next to original artwork, book one of the four signature suites, namely Surrealism, Contemporary, Modernism, or Pop.

The rest of the hotel, just 10 minutes from Mass Ave’s gay scene, is equally impressive. It even has a spa for much-required massages after all that exploring. There’s even a bar that focuses on wines as per the taste. The crown jewel, though, is the gorgeous indoor pool area. With a hot tub and sun loungers beside, this pool makes the hotel one of the best pool hotels in Indiana, not just Indianapolis.

Gay brunch fanatics might want to check in to the Alexander Hotel, which lies a straight 15-minute walk from Mass Avenue’s glitzy gay bars. The hotel is close to acclaimed modern diner Milktooth, which serves stuff like sourdough lemon poppyseed waffles and sorghum-glazed bacon. After all the chowing down, rest easy in the stylish rooms and suites at the hotel, each of which has sleek modern furniture and vibrant artwork. Don’t miss exploring the amenities and services at the rest of this boutique art hotel. For one, it has a collection curated in tandem with the Indianapolis Museum of Art. Do make time to get a nightcap at the mixology lounge Plat 99, where you can sip cocktails beneath a ceiling of hanging glass sculptures.

LGBTQ couples who love B&Bs more than anything else will love staying at the Stone Soup Inn, one of the most charming gay hotels in Indianapolis. The B&B sits in a gorgeous 19th-century Victorian home in the center of the historic district of Old Northside. Each of the rooms is polished to the hilt and individually decked out with Victorian-era antiques for a nostalgic feel. You’ll also find TVs so you can snuggle up with your partner and enjoy a romantic night of watching movies and drinking wine. Since historical landmarks and greenery surround the inn, it’s also a great neighborhood to enjoy long and romantic walks. It bodes well that the gay scene is just a 20-minute walk south of the B&B. Finally, staying here also includes floral arrangements on request, an on-call massage therapist, and complimentary drinks and snacks.

Gay travelers with a kink for everything industrial will love Ironworks Hotel Indy. This Northside boutique hotel is inspired by the industrial revolution. So, you’ll see exposed brickwork and metal, wooden beams, and pipes just about everywhere, giving the feel of a luxurious factory. The hotel might have a tough-guy look, but the rooms and suites are beyond luxurious. Think Keurig coffeemakers, spa bathrooms, plush robes, and leather sleeper sofas. The hotel happens to be one of Indianapolis’ best spa hotels, thanks to the Massage Heights spa and wellness center. When the hunger pangs come calling, head to the downstairs restaurant, Provision. Since it’s part of the Ironworks Keystone campus, the imposing boutique hotel is close to some of Indy’s best salons and globe-trotting restaurants.

Le Méridien Indianapolis is one of the best gay hotels in Indianapolis. The hotel lies near the Lucas Oil Stadium and the Indiana Convention Center and is a mere 15-minute walk from Mass Ave’s gay scene. The decidedly modern downtown Indy hotel doesn’t skimp on the amenities. On the inside, you’ll find a well-designed lobby with a well-curated library of books that you can borrow. What’s more, there’s even a complimentary fitness center where fitness enthusiasts can work out even on vacation. The Spoke & Steele restaurant and bar specializes in bourbon-based drinks, which you can pre-booze before heading out to the gay scene. The best bit? The rooms and suites are plush and tastefully decorated, with windows offering great downtown Indy views.

Gay travelers who want to stay away from the hubbub will do well to choose the Sheraton Indianapolis Hotel at Keystone Crossing. Not for nothing is it one of the best hotels in Indianapolis. This contemporary hotel is removed from downtown and connected to the Keystone Fashion Mall for ardent shoppers. The list of amenities is long; there’s a fitness center and even an indoor heated pool with a hot tub to the side. Thanks to the concierge services, you can even plan your itinerary at the drop of a hat. The Sheraton lobby is particularly stunning, with hung lighting fixtures and lots of places to relax. Moreover, the Lobby Bar and Keystone Café serve casual cuisines and even offer room service. If you’re impressed by the amenities, wait till you see the rooms and suites, which feature mod-cons and stunning views of the nearby White River.

Hotel Broad Ripple is, without a doubt, one of the best gay hotels in Indianapolis. This quaint, 13-room boutique hotel in the gay-friendly Broad Ripple village also happens to be one of Indianapolis’ most romantic hotels. It’s perfect for gay travelers who love more local experiences. What’s more, rooms and suites come in an assortment of styles. So, some have decks with White River and Monon Trail views; others have cozy setups with exposed brick walls. However, we love the common gathering areas, especially the lounge with its homey atmosphere. This is where the hotel offers a complimentary continental breakfast in the morning and wine in the evenings, making for great ice-breakers. You might even make new friends and explore Broad Ripple’s gay scene!

Because of Indy’s cultural progress, including other Midwest sister cities, many queer venues today no longer cater exclusively to the LGBTQ community. Rather, everyone has adopted a “come as you are” mindset, which does wonders for the open-mindedness in Indy. Most Indianapolis’ gay hangouts can be found in the trendy Massachusetts Avenue Arts District, a.k.a. “on the Ave.” This is somewhat of an industrial neighborhood that’s a bit north of downtown Indy. However, it’s still very much in the city center and is easily accessible. Furthermore, other neighborhoods with a smattering of LGBTQ bars include Broad Ripple, St. Joseph Historic District, and Herron Morton. Most of these neighborhoods have tried, tested, and trusted places when it comes to meeting other LGBTQ folk.