11 Most Romantic Hotels in St. Louis

Revel in the unique and pulsating vibe of the largest city in the Great Plains, St. Louis. The scintillating city effusively melds the relaxed grandeur of the South with the energy of the eastern US coast. Represented by the iconic Gateway Arch and the gushing Mississippi River, the city is the perfect place for a romantic… 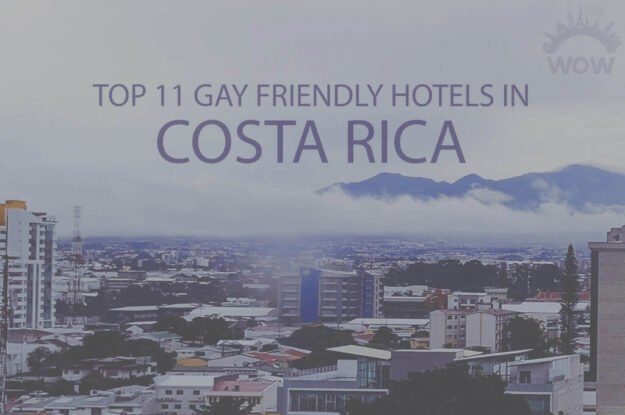 Costa Rica is a place where the only limit is your return date! Whether you want to zipline, climb volcanic peaks, descend into caves or enjoy the turquoise sea waters, Costa Rica has it all. What’s more, it was one of Central America’s first countries to recognize LGBTQ relationships. Even today, it’s considered one of the…

It’s safe to say that the eastern coast of the Dominican Republic is nothing less than sun, sand, and sea Disneyland. And, the dazzling Punta Cana is the capital of this decadent land! Boasting one of the most idyllic environs in the Caribbean, Punta Cana is the perfect place to enjoy a hassle-free Caribbean holiday.…

A visit to Colorado is complete without exploring and spending at least a few days in its vibrant capital city of Denver. Home to a slew of excellent breweries and restaurants, an excellent art scene, and historic buildings, the city is one of the coolest American cities. What’s more, Denver is leading the boutique hotel movement, too,…

11 Most Romantic Hotels in Austin TX

It seems that lately, everyone wants to spend time in Austin, including couples looking to engage in romance. Now, planning date nights at some of Austin’s most romantic restaurants seems right. But, sometimes, you might want to book yourselves into one of the city’s most romantic hotels. Whether you’re on your Texas honeymoon or even…

With Colorado legalizing recreational cannabis ages ago, Denver has been the leader in providing THC and TLC-derived products. In fact, during winters, the city sees a ton of travelers who come for the ski slopes but stick around for a few nightly tokes. It’s no wonder that Denver is called the “Mile High” city – pun unintended! Aside from the…

In case you hadn’t heard, Denver is one of the most popular destinations to visit this summer. Excellent weather, a plethora of attractions and sights, and some of the best pools around make this a great place for summer fun. What’s more, Denver is a very family-friendly city, with families flocking in from all over to check out…

Calgary lies just east of the Canadian Rockies and is the ultimate basecamp for outdoor adventures in the country. At the same time, the city is full of excellent restaurants and boutiques that radiate small-town urban charm. No matter what you’re here for, Calgary cherishes its diversity in the usual warm-hearted Canadian fashion. What’s more,…

Affectionately called a “mini-Berlin by the seaside,” coastal Valparaiso overlooking the waters of the South Pacific Ocean is one of the most vibrant of Chile’s cities. What’s more, Valparaiso and its neighboring Viña del Mar are amongst the gayest places on the continent! Santiago might be home to a larger gay scene, but it’s Valpo,…

Nestled at the base of the incredible Rocky Mountains, Denver is one of the cities that date back to the Old West Era. In fact, the city is home to some stunning Victorian architecture from the 19th century, as well as museums, galleries, restaurants, and more. Of all the neighborhoods in the city, Downtown Denver…

11 Most Romantic Hotels in Las Vegas

Las Vegas might be known for its ‘what happens here, stays here’ attitude and debauchery. But, Sin City also has a soft side, and it happens to be the world’s number one destination for weddings! It’s a place primed for romance and intimacy and is rightly nicknamed the world’s wedding capital. Did you know that…

When Christopher Columbus first made landfall on the American continent, it was the Bahamas where he landed. The tropical islands, which lie at the northeastern edge of the Caribbean islands, are home to some of its most picture-perfect beaches. It might come as a surprise to many that the laws of the country are actually…

The towns of Clearwater and Clearwater Beach on Florida’s Gulf of Mexico coast are some of the most charming beach destinations in the state. They’re part of the Tampa Bay area, which includes the cities of Tampa, St. Petersburg, and Clearwater itself. In fact, this area is one of the gay-friendliest regions in the United…

11 Most Romantic Hotels in San Francisco

With the fog rolling across the Golden Gate Bridge, the lights across the Bay, the food, and the views, San Francisco surely goes toe to toe with Europe’s best romantic cities. After all, the city is known as the Paris of the West! Whether you’re in the city for the first time or you’re out for a…

Tucked on the banks of the Detroit River, Lake Erie, and Lake St. Clair is ‘Motor City’ Detroit. The free-wheeling city is undergoing a new wave of creativity, extraordinary architecture, and edgy street art. Did you know that Detroit is one of the friendliest gay cities in the American Midwest? In fact, the city gained…

Arizona’s second-largest city Tucson is one of the most culturally invigorating places in the Southwest. The charming city seamlessly blends Anglo, Mexican, Spanish, and American Indian traditions to infuse it with a rich sense of history and community. So, it’s not a surprise when we tell you that terrific Tucson is also very gay-friendly, and…

Nicknamed the ‘Helen’ of the West Indies, Saint Lucia might as well as have been named the ‘Pearl of the Caribbean.’ Lush forests and plantations, pristine white-sand beaches, and tons of luxurious resorts and villas dot this island. Whether you’re a nature lover or a water bum, there’s something for everyone on this island. And,…

The Central American country of Belize could very well be the melting pot of the Caribbean. In fact, its residents belong to widely disparate groups such as Creoles, Garifuna, Mennonites, East Indian, Mestizos, and Mayan! Brilliant white-sand beaches, some of the world’s best beaches, lush national parks, and some of the world’s most spectacular reefs.…

Jazz blaring out of pubs, numerous gushing fountains that’ll have Rome thinking, and fiery barbeques make up kaleidoscopic Kansas City. One of the most thriving cities in America’s Great Plains region, Kansas City is home to art-filled neighborhoods, museums, and more and is a top-rated vacation destination. It might come as a surprise to many,…

Afternoon teas, castle-like homes, and a decidedly British flavor are what Victoria is known for. Exuding a veritable old-world charm, the city sits on the waters of the Salish Sea right across from the state of Washington. What’s more, it boasts excellent seafood, wine, decadent dining, and some of the west coast’s best microbreweries. Aside…

Elgin is a historical city in Northern Illinois. This growing city is the eighth-largest in this state. It’s also the 241st largest in the United States. Boasting a rich history from 19th-century industrial presence in dairy production and watchmaking, this city was once known as the “butter capital of the world”. It achieved fame because…

Remember those pictures of pristine white-sand beaches that you’d save as your desktop picture? Chances are it was snapped right here in the Turks and Caicos Islands! Comprising 40 primeval and untouched islands, this lesser-explore country in the Caribbean Sea is home to some of the most beguiling beaches in the world. Not to forget…