Top 10 Things To Do In Rio De Janeiro 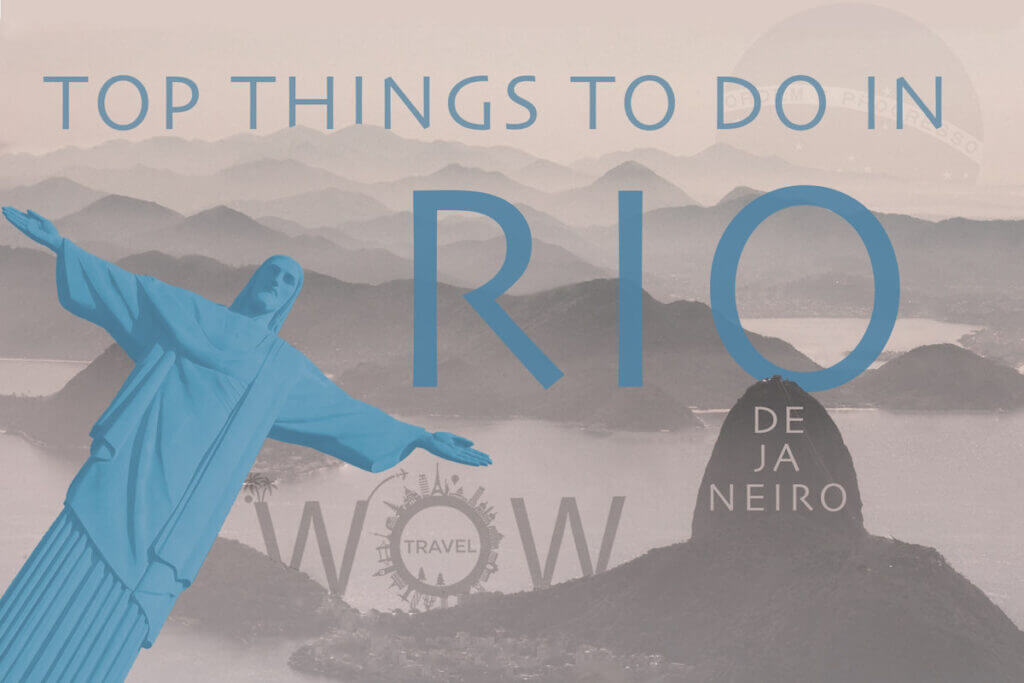 Rio de Janeiro is known as the “Marvelous City” for a reason. Actually for many many reasons. Rio de Janeiro is the second largest city of Brazil and the sixth in the Americas. “Rio” as most people call it,  is one of the main tourist destinations in the Southern Hemisphere, famous for its beaches, Carnaval celebration and soccer. Rio means non-stop fun, great food, beautiful men and women, paradisiac beaches and more. Visited by millions, Rio de Janeiro is one of those places you fall in love with upon arrival. Rio’s dramatic natural setting has impressed visitors for decades, its warm people and welcoming culture makes you want to stay forever. Check out WOW Travel’s Top 10 Things To Do In Rio De Janeiro and fall in love.

The symbol of Rio worldwide. On the top of the Corcovado Peak stands the statue of “Cristo Redentor”  with arms wide open, overlooking  and guarding the city. They started building this monumental statue  in 1922 when the Art Deco movement was in vogue in Brazil, it is considered the largest statue of its kind in the world. Visitors from all over the world take a vertical train to reach the base of the summit. Elevators and escalators are available to shorten the trip.

A marvelous 400 meter (1312 ft) mountain of quartz and granite right above the mouth of Guanabara Bay is visited by visitors every single day, rain or shine. A glass-walled cable car known as a “bondinho” or “teleférico” is available and it departs every 20 minutes from the base of the hill and climbs to the top of the Morro da Urca hill. From there, visitors can take a second cable car up to the mountain’s summit.

World visitors and locals alike love to walk along the promenade that borders the 4 km (2.5-mile) long beach. It was built in the 1930s in a wave-like design laid out in black and white stones. There is always something going on: a soccer or volleyball game, a bikini contest or a live concert. You cannot go hungry or thirsty, vendors offering ice cold drinks and food kiosks are everywhere. If you feel like spoiling yourself, cross the street to the famous Belmond Copacabana Palace which is a luxury hotel located on Copacabana Beach with an amazing restaurant and bar.

Located to the west of the Lagoa neighborhood, the Rio de Janeiro Botanical Garden houses more than 8,000 species of plants, including around 600 species of orchids. The garden includes monuments, fountains, and features, including a Japanese garden, a pond filled with water lilies and the new Environment museum.

It is known as the downtown section of Rio. The Lapa neighborhood was once the city’s red-light district. Today, the area is known for its vibrant nightlife filled with  samba bars open 7 days a week. The architecture dates back to the 1800s, it has a unique character and feeling so it is the perfect place to meet up with friends to taste local cuisine and to quench your thirst with delicious caipirinhas, the national cocktail made with sugarcane hard liquor and lime.

Soccer or FUTBOL as it is called in Brazil is almost the second religion in Brazil and the Maracanã Stadium is one of Rio’s most important landmarks. It used to be the world’s highest capacity football stadium. It was partially rebuilt in preparation for the 2014 World Cup and is currently able to seat 80,000 spectators making it the largest stadium in South America.

It was the inspiration for the famous in the bossa nova song “The Girl from Ipanema”  and it is one of Rio’s most popular tourist spots today. Soft white sand, dancing palm trees, rolling waves and more make of Ipanema one of the best beaches in the world in magazines and tourist guides every year. It is always clean and organized, with security guards and a variety of shops, cafés and restaurants as well as art galleries, theaters and clubs.

On the slopes of one of Rio’s many hills, we find Santa Teresa neighborhood. It is a trip down Brazilian 19th-century memory lane. Tourist can see the faded elegance of Rio’s plantation mansions and cobblestone streets of old times. This particular area used to be a paradise for artists, musicians, and writers in the 1900’s. The city’s last remaining streetcar, the Santa Teresa Tram, used to be a popular tourist attraction in Rio de Janeiro but was closed after a serious accident on the line.

Lagoa means “lagoon” in Portuguese and it was named after the large lagoon known as the Lagoa Rodrigo de Freitas located in the center of this residential area. The Lagoa area is the most exclusive neighborhood in Rio and the third-most expensive neighborhood in all of South America. There is a four-mile path around the lagoon where joggers and cyclists and other athletes practice their favorite sports. Parisian style Open-air cafés and gourmet restaurants along the shore offer stunning views of the lagoon and the beaches beyond.

Let’s not forget that Rio is close to the Tropic of Capricorn so greenery is everywhere you look. The Tijuca is one of the largest urban forests in the world. It is a very mountainous region so visitors can hike to Rio’s highest peak, the Pico da Tijuca and enjoy the view of Guanabara Bay. It is a tourist attraction for all ages.