13 of the Best Things To Do In Bogota 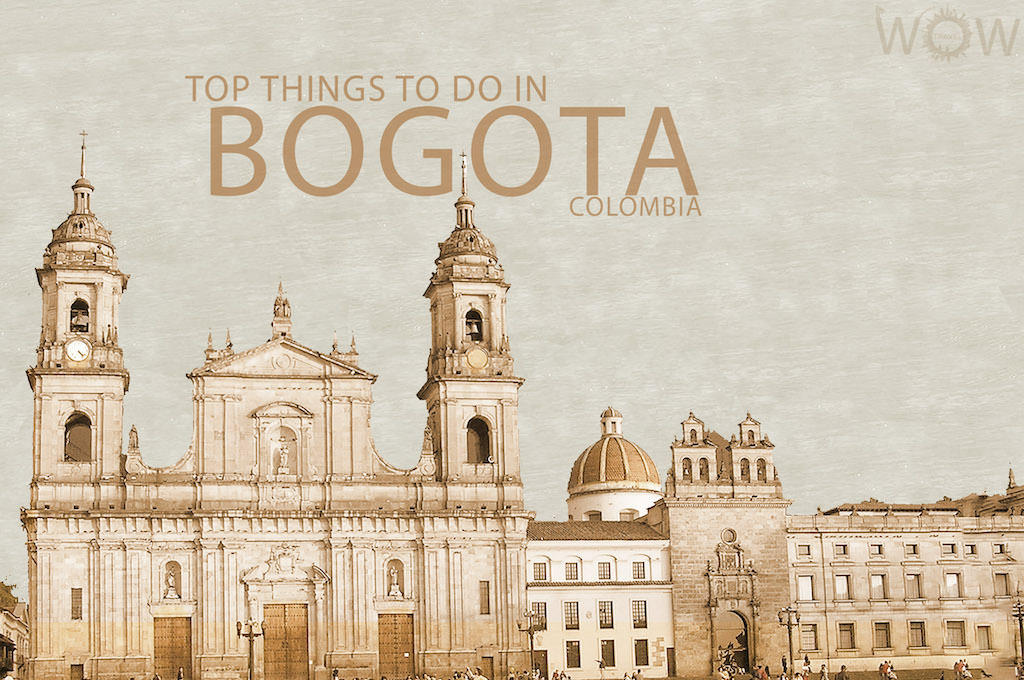 Bogota is Colombia’s capital and largest city, with more than 7 million residents. It was home to the region’s indigenous people, the Muisca. Today, Bogota is a vibrant restaurant scene, world-class museums, and surprisingly wild nightlife. The city is also a charming colonial quarter with classical and progressive architecture, making it one of the most incredible and beautiful cities on earth. More than everything, Bogota is all about its people; warm, charming, sophisticated, and stylish. The vast and bustling city has plenty of places to see in Bogota Colombia. Without further ado, let us present you with the best things to do in Bogota, along with their tours, price, and other things.

The Botero Museum of the famous artist

Situated in a renovated colonial house in the heart of Bogota’s historical center, the Botero Museum houses one of Latin America’s most important international art collections. It showcases the paintings and sculptures of Colombia’s famed artist, Fernando Botero. He’s famous for depicting exaggeratedly overweight subjects. What you may not know, Botero attended a school for matadors for several years.

Located in the Candelaria neighborhood, a historical section of Bogota, the museum sees over 500,000 visitors annually. Among these visitors are children, teachers, adults, and families. There’s a similar museum in Medellin as well.

High up on the great Andes Mountains, watching over the city, is Cerro de Monserrate. It’s a 3,152-meter (10,341-ft) mountain that dominates the capital city of Colombia, Bogota. The place offers one of the most magnificent and panoramic views of Bogota. Get there by taking the cable car ride.

In this one of the best places to see in Bogota Colombia, there’s a church with a shrine, restaurants, and a market for souvenirs and local delicacies such as coca tea. The place is filled with Columbians and foreigners climbing up the hill every weekend.

Plaza de Bolívar, previously called Plaza Mayor until 1821, is the main square in the Candelaria neighborhood. It’s the heart of the historical and political area of Bogota, filled with vendors, tourists, and friendly pigeons. The city’s main square features the National Capitol building, the city mayor’s office, the Palace of Justice, and the Cathedral of Bogota.

Within the square, you’ll find a famous statue of Simón Bolívar that was created in 1846 by Italian Pietro Tenerani. It is the first public monument in Bogota and was appointed as a National Monument on October 19th, 1995. When visiting the city, it’s tough to miss this one of the best things to do in Bogota.

La Candelaria is the historical and cultural center of the city, founded in 1538. The city takes its name from a Catholic chapel dedicated to the Virgen de la Candelaria. It’s undoubtedly the bohemian neighborhood of Bogota and the place to be for plenty of activities. This vibrant area is filled with significant landmarks, such as the neoclassical Capitol flanking Bolivar Plaza and the colonial-era cathedral. It’s also a cultural hotspot, where you’ll find Museo Botero and Gold Museum.

Packed with locals and tourists, it’s a great place to walk around and lose yourself in quaint alleyways and cobblestone streets. As one of the best things to do in Bogota, it houses many Spanish colonial buildings, wooden cathedrals, and street art everywhere. Besides, there are plenty of casual eateries that serve dishes like ajiaco (chicken and potato soup).

For many reasons, Casa de Nariño is one of the best things to do in Bogota. Also called Palacio de Nariño, it’s the official home and principal workplace of the President of Colombia. From 1765, Casa de Nariño was the home where one of the most significant heroes of the independence process grew up: Antonio Nariño y Alvarez.

Located in historic Bogota, people usually view the palace from the outside. With that said, we highly recommend going inside though you will need to book well in advance. However, the guided tour is free with every entry and perhaps the most interesting in the city. Inside, you can see some of the country’s most iconic art, decoration, and politics.

“A visit to Villa de Leyva is a lovely side trip which can be done in a day but is more leisurely done with an overnight stay or two. Villa de Leyva is a Spanish town left in time with no modernization at all. It is filled with original buildings and cobblestone streets. The square is one of the most popular Bogota attractions, with a small fountain and a white cathedral that sits against an amazing backdrop of the Colombian Highlands.” Source: lehotels.com

It’s a Colombian town located northeast of Bogota city. One of the best things to do in Bogota, Villa de Leyva, is known for cobbled lanes, the vast Plaza Mayor, and whitewashed colonial buildings. Without a doubt, Villa de Leyva is one of the most beautiful towns in Colombia. The town’s beautiful landscape and history is perfect for nature, history, culture, and art lovers.

Zona Rosa, also known as Zona T, has become one of Bogota’s trendiest and most upscale neighborhoods. Zona Rosa is Bogota’s major nightlife district, with many high-end restaurants, malls, boutique stores, European-style bars, luxurious lounges, and exclusive nightclubs. If you like clubbing, this is one of the best things to do with many options, from mixes of western and Colombian music to techno and electronic pop.

Visit the vibrant Zona Rosa and take a stroll on its beautiful streets lined by the best bars, restaurants, and shopping in the country. Though it’s a bit overpriced, this neighborhood offers much-needed safety and security. The Zona Rosa is also home to the Chapinero, an LGBT-friendly area with a large concentration of gay and lesbian bars and clubs.

Gold Museum, one of the top attractions of Bogotá

The Museum of Gold, in Spanish: El Museo del Oro, is one of the best things to do in Bogotá you shouldn’t miss. The renovated Gold Museum is the most popular and rewarding in Colombia. Here you will discover how metals, especially gold, were used in the Pre-Hispanic societies that used to live in the area that today is Colombia.

The museum is visited by around 500,000 tourists per year. There are 3 floors filled with more than 34,000 gold pieces on display from archeological sites across Colombia, including masks, breastplates, crowns, bowls, jewelry, offerings, and armor. It’s a dramatic walk-through of Colombia’s rich and fascinating history with gold production. This museum opens from Tuesday to Saturday, from 9:00 am to 6:00 pm.

About an hour outside the city, in the town of Zipaquira, there is the world-famous salt cathedral carved within a salt mine 180 meters (590 ft) underground. The Salt Cathedral of Zipaquirá, or Salt Cathedral, is an underground Roman Catholic church. It’s a place of pilgrimage in the country and one of the tourist places to see in Bogota Colombia. On February 4th, 2007, it was declared the First Wonder of Colombia.

The architectural and artistic design of the new salt Cathedral was done by Bogotan architect Roswell Garavito Pearl. His plan was approved after selecting the project with a total of 44 proposals in a contest organized by the Colombian Architects Society in 1990. By the way, the town of Zipaquira is also a fantastic place to spend an entire day.

“Usaquen is a neighborhood that feels like a small local town. It is a popular place with a number of restaurants, live music shows and shopping. Not to be missed is the flea market on Sundays that showcases lots of typical handicrafts. The Hacienda Santa Barbara shopping mall is also located here.” Source: lehotels.com

It’s a sin not to include Usaquen in your top list of what to do in Bogota. Walk around Usaquén Park, its narrow streets, and visit the church of Santa Barbara Usaquén located on the eastern side of the main square.

Located not far from Bogota, the Laguna de Guatavita, or Lake Guatavita, is a small body of water in a forest-fringed crater. It’s a perfect destination if you want to get a dose of nature. It’s where the story of El Dorado – not the airport – originated and a sacred site to the Muisca people.

Get to see the stunning view of the water from the top, trek through the biodiverse, enjoy some fresh air, and relax in the hot spring in the nearby town. Also, visit the town of Guatavita and explore the well-preserved colonial architecture and cobblestone streets and squares.

Santuario Nuestra Senora del Carmen, the most beautiful in the city

The National Shrine of Our Lady of Carmen is a Florentine Gothic church in La Candelaria, the historical center of Bogota. It’s a temple of the Catholic cult dedicated to the Virgin Mary under the name of Carmen. It looks like a giant candy cane with its unique striped red-and-white paint scheme outside and inside.

The church was built in the early 20th century, from 1926 to 1938. Designed by architect Giovanni Buscaglione, the church stands almost 60 meters tall and has some incredible Byzantine and Moorish art. In 1993, the Shrine and the Salesian school “León XIII” were declared a national monument.

Fans of architecture and book nerds will absolutely love this enormous library in Bogota. Biblioteca Público Virgilio Barco is located next to Parque Simón Bolívar. The massive park is larger than New York’s Central Park. The park is the city’s hot spot for concerts and sporting events and even has a large central lake where you can go paddle boating.

The library offers plenty of gardens and spaces for reading. This modern, 3-story public library with a unique circular shape was designed by a renowned local architect, Rogelio Salmona.

The round library building is encircled by mirror-like waters to create a serene environment. In addition to all the books, they have exhibits on display frequently and free Wi-Fi with no additional fee. Besides, an open-air theater has a great city view on the roof. Its café offers snacks and drinks for refreshment. All the reasons to have it on your list of the best things to visit and do in Bogota.

What is Bogotá most known for?

Founded in 1538, Bogota, Colombia’s capital, is known for its historical charm, culture, arts, and gastronomy. This one of Latin America’s most lively and popular cities offers unique experiences to visit and live. Plenty of places to see in Bogota Colombia, as a must-see tourist destination. If you’re wondering what to do in Bogotá, a visit to Plaza de Bolivar, Cerro de Monserrate, National Museum, and Casa de Nariño is a must.

How many days do you need in Bogotá city?

As an international hub for many travelers to Colombia, Bogotá is worth visiting. Spending 4-5 days in the Columbian capital allows you to explore this dynamic city. The best things to do in Bogota include trying its cuisine, visiting museums, and Laguna de Guatavita.

What is the best time of year to visit Bogotá Colombia?

December to March is the best time of the year to visit Bogotá. These months offer a dry season with a pleasant climate, giving a fresh and cool breeze to visit the top attractions in the city. However, the rainforest area can be wetter all year round.