The 12 Highest Capital Cities In The World 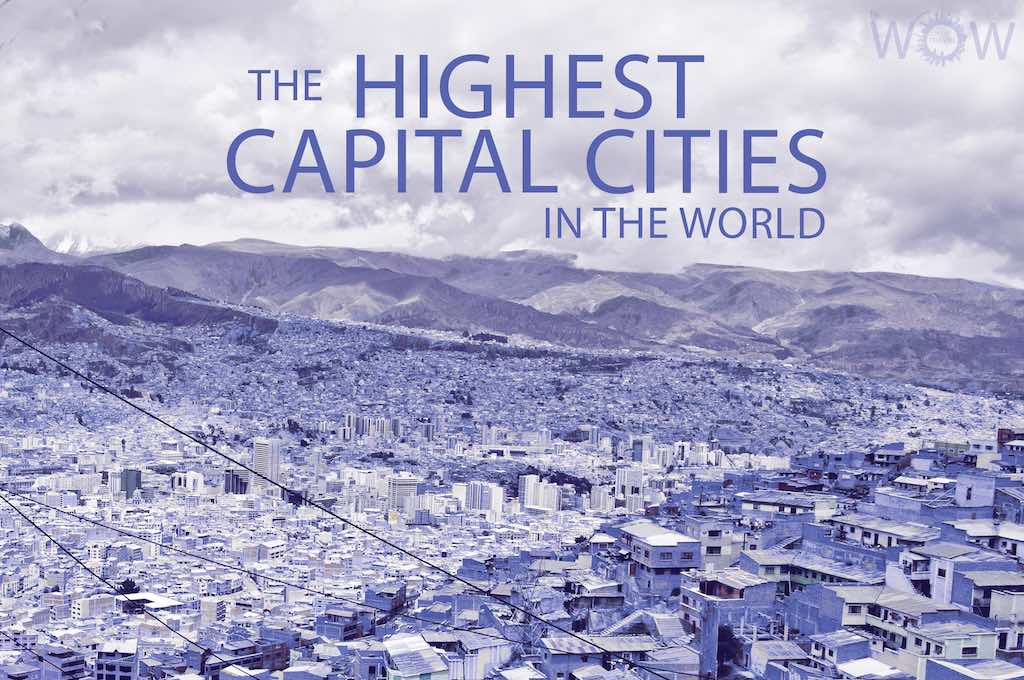 The dictionary defines a capital city as ‘a city or town that functions as the seat of government and administrative center of a country.’ However, not all countries have their seat of government in the capital city, like Sucre in Bolivia, which is the official capital but not the seat of the government. Capital cities are generally strategically chosen to make governance easier so it’s not necessary for the largest cities to become the capitals either. All said and done, the capital is generally considered the ‘loftiest’ city of a country as it showcases a country’s political might and standing to the world. Some capitals take the word ‘lofty’ to a whole new level as they sit on elevations far above any other city of the world. Check out our list of the 12 highest capital cities in the world; some of them so high, acclimatizing to their climates takes visitors quite a while.

One of the most modern cities of Namibia is its capital, Windhoek. Located in central Namibia at an elevation of 1,700 meters, unlike most other countries in Africa, the city enjoys mild temperatures throughout the year. The city was first established in 1840 when a stone church was built by Jonker Afrikaner for the Orlam community. However, multiple wars resulted in the decline of the new settlement which was rebuilt by the Imperial German Army in 1890. The German influence on the city is evident in a few German castles which are visible on the skyline. German is still spoken by many in the region.

Afghanistan’s capital city is situated at an elevation of 1,790 meters in a narrow valley between the Hindu Kush mountains. This ancient city said to be over 3,500 years old was a key location on the ancient Silk Road. It became the capital of the Afghan empire in 1776 and has remained the capital since then. Much of the city was destroyed during the civil war in the 1990s, but after the Taliban were removed from power in 2001, the city has since witnessed rapid growth. The city which was once a mecca for young western hippies is renowned for its palaces, gardens, and bazaars. See what the city has to offer by reading our list of things to do in Afghanistan.

Nairobi, the largest city and capital of Kenya gets its name from the Maasai phrase ”Enkare Nairobi” which literally means ‘cool water.’  Situated at a height of 1,795 meters between the cities of Kampala and Mombasa, Nairobi experiences a subtropical highland climate with cool summers and cool winters. Evening temperatures between the months of June and July can fall to 9 degrees Celsius, while the maximum average temperature between December to March climbs to 24 degrees. Despite the sometimes ‘notorious’ reputation that Nairobi has, a visit to the city has lots to offer. With a national park just on its borders and various museums and historical landmarks, there’s much to see and do in the city.

Situated on the lower slopes of the magnificent Alborz Mountains, altitudes range from 1,712.6 meters in the south of the city to 2,000 meters in northern Iran. The climate of the region is largely influenced by its geographical location with the Alborz Mountains in the north and the central desert to the south. The rich history of Iran is visible in Tehran’s buildings like the Golestan Palace, Saadabad, the Azadi Tower and the US embassy. One of the largest jewel collections in the world, the Iranian Imperial Crown Jewels, is showcased at the city’s museum.

The most populous city of North America is situated at an elevation of 2,240 meters in the Valley of Mexico. Ciudad de Mexico or Mexico City is the oldest capital city in the Americas and also one of two cities founded by Native Americans. The city enjoys a subtropical highland climate with cool summers and cool winters. Although the Valley of Mexico used to experience several snowfalls per decade, the valley hasn’t seen any snow since 1967, after the draining of Lake Texcoco. Mexico City is fast becoming a popular weekend destination for culture seekers and urbanists as a new wave of local entrepreneurs strive to rejuvenate the city’s public spaces and culture.

Yemen’s war-torn capital is one of the oldest continuously inhabited cities in the world. This is probably due to the moderate climate that Sana’a experiences at an altitude of 2,300 meters above sea level. The Old City of Sana’a was declared a UNESCO World Heritage Site, but rather sadly many of the old buildings were hit by bombs during the conflict in 2015. Get to know more by reading our list of 11 Most Beautiful Places in Yemen.

This UNESCO World Heritage Site is located at the tip of an escarpment on the Eritrean Highlands on the Horn of Africa. Due to its elevation at 2,325 meters, Asmara enjoys a relatively mild climate although its location is not very far from deserts. It has a rare version of steppe climate with warm summers and mild winters. Though the city has had inhabitants since 800 BC, it was officially founded in the 12th century AD when four villages eventually joined hands after long periods of conflict.

Often referred to as the ‘political capital of Africa,’ and Ethiopia’s capital and largest city, also serves as the capital of Oromia. Situated near the equator at an elevation of 2,355 meters above sea level, the high elevation ensures that the city enjoys a moderate temperature the year-round. Tourism in the area has seen a 10% increase in recent years with more visitors converging on Addis Ababa. The city is extremely safe as compared to other cities in the region and violent crimes are a rarity.

Previously known as Santa Fe de Bogota, the capital of Colombia was founded on 6 August 1538, as the capital of the New Kingdom of Granada. In 1819, it became the capital of the independent nation of Gran Colombia and has remained the capital of this territory ever since. Bogota is located on a high plateau in the center of Colombia at an altitude of 2,640 meters above sea level. The city and its surroundings were once covered by extensive wetlands covering nearly 50,000 hectares in the 1960s. Today all that remains is 727 hectares.

The third-highest capital city in the world lies at elevations ranging from 2,248 meters to 2,648 meters. The climate is quite mild throughout the year but the winters can be especially cold with temperatures dropping to 0 degrees Celsius. Bhutan’s largest city became the capital city in 1955, replacing the ancient capital of Punakha. Thimpu is the most modern of the cities in Bhutan but still manages to retain its cultural identity. Ancient traditions are juxtaposed with the modern, making this a place of intrigue and charm.

Ecuador’s capital and second-largest city located at an elevation of 2,580 meters above sea level, is the second-highest capital in the world. Quito also has the distinction of being the closest capital city to the equator with its central square being about 25 kilometers south of the equator. As such, it is the only city on Earth where the climate is determined by which part of the Hemisphere it falls in. Quito enjoys a constantly cool climate but also receives some of the greatest solar radiation in the world. The city itself offers tons of things to do.

Bolivia has two recognized capitals which are both situated at very high altitudes. The beautiful constitutional capital Sucre is situated at a height of 2,750 meters above sea level, and La Paz, the seat of the government at a whopping elevation of 3,640 meters. At this high altitude, the colorful and sometimes chaotic city of La Paz wins the title of ‘the highest capital city in the world’ hands down. See more 12 Most Beautiful Places in Bolivia.