Top 12 Things To Do In Quito 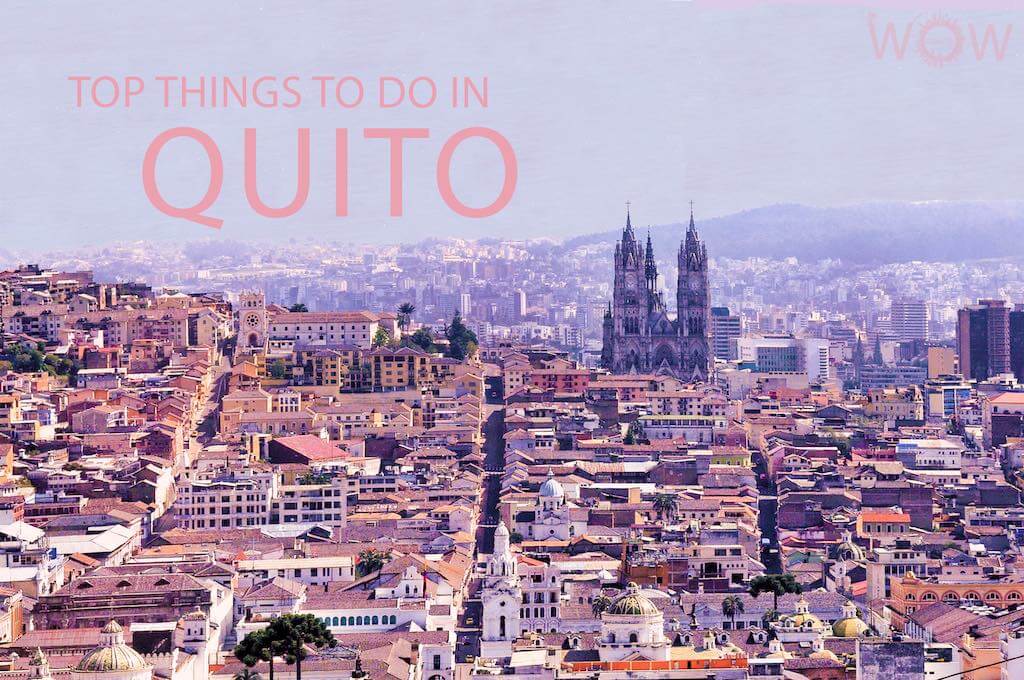 Quito, the capital city of Ecuador sits at an elevation of 2,580 meters above sea level, making it the second-highest official capital city in the world, after La Paz. It also has the distinction of being the closest capital city to the equator with its central square being about 25 kilometers south of the equator. The city is a vibrant blend of modernity with history, with its historic center being one of the best-preserved historic centers in the Americas. Along with Krakow in Poland, Quito was one of UNESCO’s first World Cultural Heritage Sites declared in 1978. The city which is between mountain peaks is surrounded by some breathtaking scenery.
[booking_product_helper shortname=”quito”]

Basilica of the National Vow

The largest neo-Gothic basilica in the Americas which stands prominently in the historic center is the Basilica of the National Vow. In 1883, the idea to build a monument as a reminder of the consecration of Ecuador to the Sacred Heart was proposed by father Julio Matovelle. The proposal was accepted by the President who issued a decree to this effect on July 23, 1883. Construction began on the building in 1884 but it was only consecrated and inaugurated on July 12, 1988. The basilica is still technically unfinished. Visitors are allowed access to the top of the towers which offer some beautiful views of the city and its surroundings.

One of the best ways to view Quito’s spectacular mountainous landscape is to take a ride in the TeleferiQo, one of the world’s highest aerial lifts. The ride takes passengers up a 2.5km ride to the top of Cruz Loma which is at 4100m. The views to and at the top are breathtaking. The more adventurous can choose to hike to the summit of Rucu Pichincha from here. A children’s amusement park is located at the base of the station.

A walk down the quaint cobblestone street of La Ronda in the Old Town will give you a true taste of the city. The street with its colorful houses and balconies was once an ancient path to the river but was transformed into one of the main centers centuries later after the Spanish conquest. In the late 19th century, La Ronda began to attract many painters, poets, activists, and prostitutes. However, it soon deteriorated into one of the more notorious areas in the city but in the late 20th century a restoration drive has brought back its former glory. Today the floral balconies and lantern-lit streets beckon visitors to explore this beautiful area of the city.

The Church of the Society of Jesus

A building which stands out in the Old Town is the Jesuit church, La Compania Jesus. It is the most ornate church of Quito with its large central nave ostentatiously decorated with gold leaf and gilded plaster and wood carvings. It took 160 years to complete the construction of this church which began in 1605. La Compania Jesus is one of the most significant works of Spanish Baroque architecture in this part of the world, although it incorporates elements of four architectural styles.

The former home of legendary painter Oswaldo Guayasamin has been transformed into a museum which houses a collection of the artist’s works. Besides being such a great painter, Guayasim was also an avid collector and his vast collection is also displayed in the museum. The artist is buried alongside his friend under a pine tree close to the house.

26km north of the center of Quito in the canton of San Antonio parish is the Monument to the Equator. It commemorates the 18th-century mission which fixed the approximate location of the equator. The iron and concrete monument which stands 30 meters tall was constructed between 1979 and 1982. The yellow line which is drawn down the center of the east-facing staircase, that divides the two hemispheres is a popular spot for visitors. The Ethnographic Museum is also housed in the same grounds.

Church and Monastery of Saint Francis

This 16th century Roman Catholic church which houses the city’s beloved Virgin of Quito has the distinction of being the largest architectural ensemble among the historical structures of colonial Latin America. Almost 150 years went into the construction of the church which bore the brunt of a few earthquakes. The style evolved with the changing tastes and the facade reflected Mannerist elements for the first time in South America. Within the Convent of St Francis is a museum containing some the church’s finest artwork.

Plaza Grande is one of the most popular places in Quito for soaking up the local vibe. Located in colonial Quito, the central and public square features a monument to the heroes of independence and is formally known as Independence Square. Important buildings like the Metropolitan Cathedral, the Carondelet Palace and the Archbishop’s palace flank the square. If you’re in the area on a Monday, be sure to catch the changing of the guards which takes place in the square at 11 in the morning.

The statue of the Virgin Mary located on the El Panecillo hill, stands tall at 41m, overlooking and watching over the city of Quito. Although the walk up to the hill used to be a great one it is not recommended because of the number of the pickpockets in the area. A taxi ride will take you to the monument from where you can take in spectacular views of the city and the surroundings. You can even climb up to the base of the statue for better views.

The Cathedral of Ecuador is located on the southwest side of Plaza Grande. It is not as elaborate as the churches in the Old Town but has some fascinating works by artists from the Quito School. The cathedral is also the burial place of Antonio Jose de Sucre, the independence hero. In 1660 the cathedral was damaged by the eruption of the volcano Mount Pichincha and rebuilt. Behind the main altar, you will find a plaque that marks where the injured President Gabriel Garcia Moreno died in 1875 after being slashed by a machete.

To the northwestern side of the Plaza Grande, you will find the white Presidential Palace, the seat of the Ecuadorian presidency. Since the palace is very much in use by the president, who lives and works here, sightseeing is limited. A free guided tour will take you through the rooms which are not in use. The Museo de la Presidencia where the tour begins is a great place to get an understanding of Ecuador’s history. There is also a beautiful mosaic by Guayasamin at the staircase.

An hour south of Quito is the Cotopaxi National Park, named after the Cotopaxi Volcano which is located within its boundaries. The volcano is one of the highest and most active volcanoes in the world. A good idea is to stay overnight at the park to get an early morning view of the volcano. There are a number of good hiking trails within the park, like the hike to Laguna Limpiopungo, a seasonal lake that swells during the rains. Climbing to the summit is no longer allowed but you can hike to the Jose Ribas Refuge which is 4,500 meters high. Another good way of exploring the park is to join a biking tour.