Top 10 Things To Do In Madrid 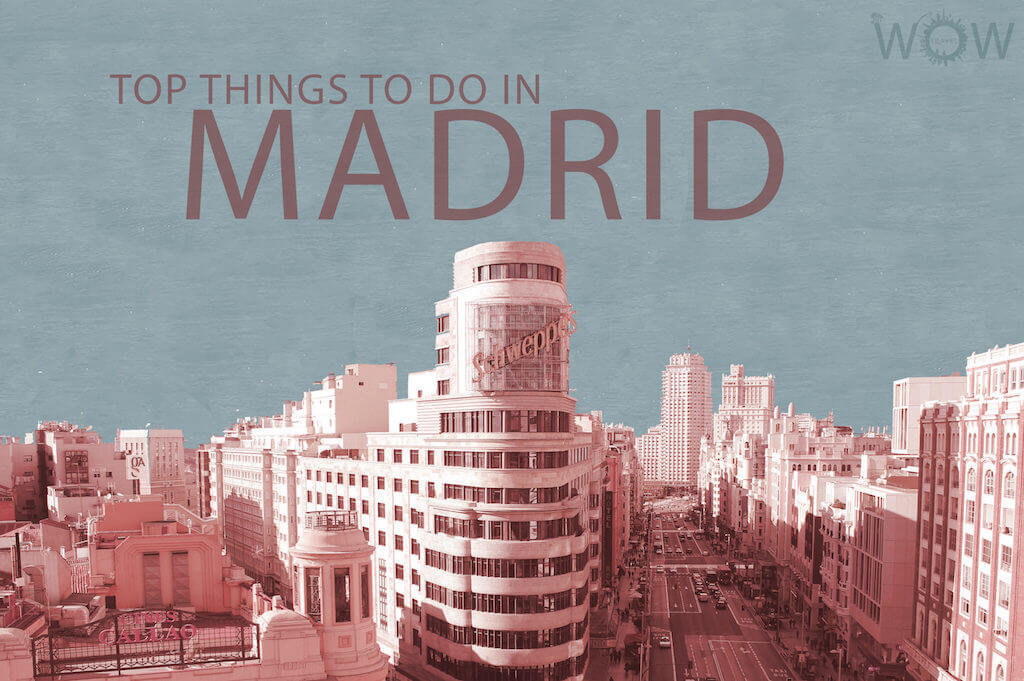 Madrid is not only the home of the world’s most successful soccer club of the 20th century, The Real Madrid, but it also means incredible architecture, great museums, unbelievable restaurants and more. Madrid was declared the capital of Spain in the 17th century and its name comes from the Arabic word “magerit” which means ‘place of many streams’. Madrid has been officially declared as one of the “greenest” cities in Europe and it is a magnet for tourists from all over the world. Madrid is full of energy which is contagious, the more time you spend there, the more you want to learn about it. The International Barajas Airport is designed to receive 70 million passengers annually so come to enjoy the fever of soccer, taste delicious Spanish paellas, flamenco dancing and more.  Here are WOW Travel’s Top 10 Things To Do In Madrid so you can love it as much as we do.
Booking.com

This is one of Europe’s top museums and Madrid’s number 1 tourist site. It contains 120 exhibits that show the strong influence which El Greco had on the origins of modern painting. See world-renowned paintings such as “The Crucifixion”, “Las Meninas”, “Jacob’s Dream”, “The Immaculate Conception” and more.

The Royal Palace is Madrid’s largest building and its most beautiful. Tourists can visit it almost every single day of the year except on the days of official ceremonies and receptions. It is located next to the equally beautiful Plaza de Oriente square.

It is the latest cultural and architectural spot of the city.  The building itself is as interesting as its content. Just to admire its exuberant facade – a vertical garden designed by the French botanist Patrick Blanc is a show. The Caixa Forum displays 15,000 plants from 250 species. This unique cultural center includes a bookshop, a restaurant and an auditorium.

Madrid’s cathedral is a mixture of styles with a neoclassical exterior, a gothic revival interior, and a neo-romanesque crypt and it is unusually not oriented east and west, but has its orientation north and south. It is a magnificent church as it was supposed to be part of the Royal Palace complex.

This is the city’s most famous and most central square, located just a short walk from the Main Square. Originally it was the site of one of the city’s gates, which faced the east and was adorned with an image of the sun, hence the square’s name. People gather here every year for Christmas and New Year’s Eve to count together till midnight and to eat the traditional 12 grapes, a symbol of good fortune for next year.

Considered by many as the world’s best private art collection, now managed by the Spanish Government. This museum receives 1 million visitors per year.

Puerta de Alcalá is located at the Plaza de la Independencia in Madrid. The original gate was built in 1599 as a welcome gesture to doña Margarita de Austria, who was the wife of King Felipe III. It is a beautiful display of Spanish architecture and royal history.

Madrid’s most famous streets with hundreds of shops, stores, hotels, banks, restaurants, bars, cinemas and theaters and more. It is without a doubt a MUST on your visit to Madrid as it is the most important commercial district in the city.

Located in the heart of the city with a sculpture of Cybele, the Greek goddess of fertility. It is Real Madrid’s official fountain and meeting point for its fans and often for the players themselves whenever the team wins the Spanish league or Spanish Cup.

The Casa de Campo is a 1,700 hectares park located in Madrid (6.6 sq mi) – five times bigger than New York’s Central Park. Among its attractions is a large lake where you’ll find small boats and where residents and athletes practice kayaking for competitions. There is a funfair, the Madrid Zoo, a youth hostel, sports facilities and more than a few spaces for concerts and events, including Madrid Arena.