The 12 Most Amazing National Parks On Earth 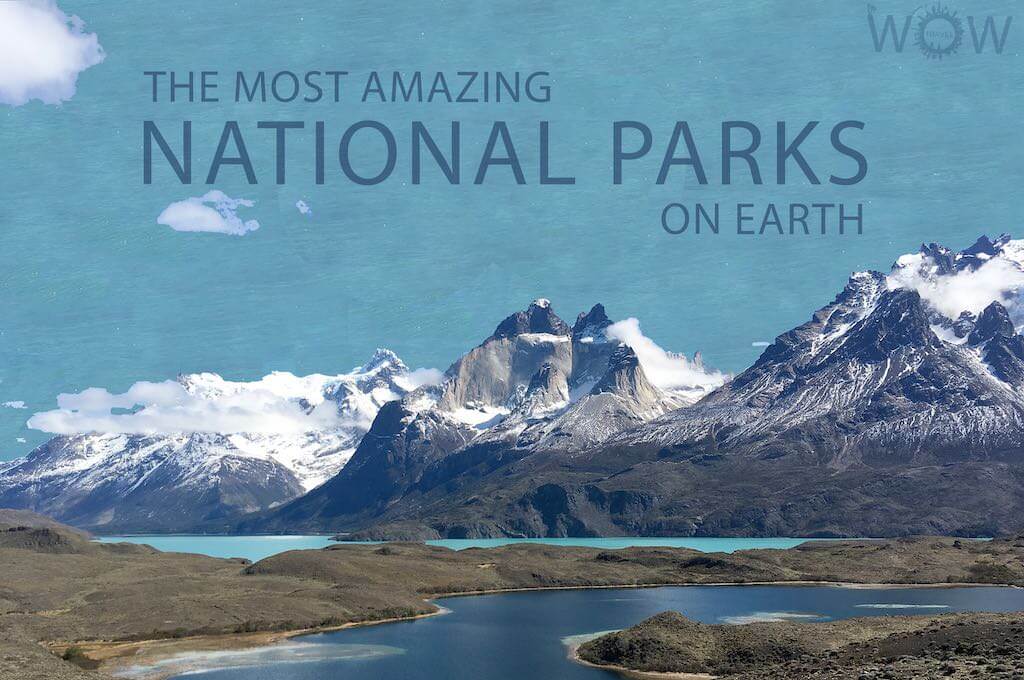 The world we live in is truly an amazing one with so much diversity in all its forms. Whether it is the tall white peaks of the mountain ranges, the azure blue of the water bodies, the verdant greens of the hills and valleys, or the striking hues of the bare rocks, there’s so much about this myriad planet that leaves one awestruck. Being able to see nature at its best is sometimes a rarity with the ever-expanding concrete jungles. However, governments around the world have taken positive steps towards preserving some of these exotic wonders by declaring them as National Parks. There can be no better place to experience the true wonders of nature than by visiting a national park with its stunning landscapes and unique flora and fauna. We’ve only showcased 12 of these amazing national parks, but there are many more of these natural wonders around the globe definitely worth exploring.

A hike through Canada’s oldest national park will leave you quite amazed. Located in Alberta, the Banff National Park with its pristine mountain lakes, enormous glaciers, snowcapped peaks, and abundant wildlife is the crown jewel of the Canadian Rockies. Spread over an expansive area of  6,641 square kilometers, the park showcases some of the best that the North American wilderness has to offer.

Located on the southwest corner of the South Island of New Zealand, and covering an area of 12,607 square kilometers, Fiordland National Park is the largest of the country’s national parks. The rugged mountains reflected in the Mirror Lakes and the glacier-carved fiords are a huge draw for the over half a million visitors to the park. Fun fact: one of the world’s steepest street is in New Zealand!

The archipelago of volcanic islands that make up Galapagos are spread out on either side of the equator and are renowned for a large number of endemic species. The islands are associated with the father of evolution, Charles Darwin who during the second voyage of HMS Beagle, studied the unique creatures of the island. Galapagos National Park is a UNESCO World Heritage Site and Ecuador’s first national park. It is the place to marvel at giant tortoises and some of the world’s most interesting ecosystems.

It’s quite difficult to imagine that the spectacular landscape of Goreme valley in Central Anatolia and its surroundings have been entirely sculpted by the forces of nature. Fairy chimney rock formations, tent rocks, rock towers, and multi-colored cliffs cover the landscape of this fascinating region in Turkey which is spread over almost 100 square kilometers. What is even more amazing is how people have used these interesting formations as residences. The soft tuff rock has been hollowed out to create underground dwellings, carved houses, and churches.

Given its high popularity, Arizona’s Grand Canyon is probably one of the most photographed natural sites on the planet. The gorge of the Colorado River is often considered to be one of the Wonders of the World with its exposed layers of colorful rock which date back to the Precambrian times. There are several walking tours and mule rides that visitors can avail of to experience some of the amazing landscape.

This UNESCO World Heritage Site and World Biosphere Reserve in the Sichuan Province of China will take your breath away. Located at the edge of the Tibetan Plateau at the southern end of the Minshan mountain range, and extending over an area of 72,000 hectares, this wonderland is renowned for its numerous multi-layered waterfalls, snow-capped peaks, and crystal clear lakes in different colors. The stunning Pearl Shoal a sloping area of calcareous tufa deposits is a sight to behold as is the Five Color Pond.

171 km southeast of Darwin in the Northern Territory of Australia lies the Kakadu National Park covering an area of 19,804 square kilometers, the size of Slovenia. Although the park may not have the stunning features of the other natural parks, its rich history is the key attraction. Besides the natural landscape, the park is well known for the richness of its Aboriginal cultural sites which date back to 20,000 or possibly 40,000 years. More than 5,000 recorded art sites are spread over the area which has been continuously occupied by the aboriginal people for at least 40,000 years. The park is also home to some rare and endemic species of animals.

The name of the park is derived from the numerous glaciers that cover almost half of this beautiful expanse. Spread over a massive 600,000 hectares, the Los Glaciares National Park located in the Santa Cruz Province of Argentina is renowned for its rugged granite peaks and beautiful glaciers. The massive Perito Moreno Glacier is the centerpiece of the park, standing about 60 meters high. Every so often, huge chunks of the glacier break off with a thunderous crash to deposit bluish icebergs into the waters of the Lake Argentino.

Lying in the mountainous karst area of central Croatia at the border to Bosnia and Herzegovina, the Plitvice Lakes National Park with its cascading lakes is a wondrous sight indeed. Sixteen lakes make up this heaven on earth with waterfalls in varying sizes. The distinctive colors of the lakes ranging from azure to green, grey or blue, constantly change with the angle of the sun and the number of minerals present in them.  The national park is spread over an area of 296.85 square kilometers across two political subdivisions or counties but the overall area of the water body is about 2 square kilometers.

For the wildlife enthusiast, there is no better place than Serengeti National Park in Tanzania. The park which was established in 1952, is home to some of the most majestic animal species on the planet. From the powerful ‘King of the Jungle’ to the giant elephant and towering giraffe, there is no better place to marvel at these beasts than in their own natural environment. The migration season of over a million wildebeest and 200,000 zebras during the months of October and November is the star attraction of the park. The park which covers an extensive 14,763 kilometers can be divided into 3 sections comprising the popular southern/central plains called the ‘serengit’ by the Masai, the western corridor with its forests and dense bush and the northern part which touches Kenya’s Masai Mara Reserve.

The varied landscape of one of the finest national parks of South America is dominated by the towering pillars of the Torres del Paine. Although the mountain is a majestic sight, what draws visitors to this 1810 square kilometer park is the diversity of the landscape. The emerald forests blended with the azure and teal lakes of the region make for some breathtaking photographs. Other major attractions include the Cuernos del Paine and the glaciers. The park has been the target of three major fires in recent years when backpackers in 1985, 2005 and 2011 accidentally started fires that destroyed large areas of the reserve.

Established in 1872, the Yellowstone National Park is hailed as the first national park in United States and possibly the first in the world. Spanning an area of 8,983 square kilometers, the park comprises canyons, mountain ranges, lakes, and rivers. It is also home to vast forests inhabited by grizzly bears, wolves, elk and the largest herds of free-roaming bison. The Yellowstone Caldera located within the park is the continent’s largest supervolcano. This volcanic hotspot is also renowned for its hydrothermal features and geysers, especially the Old Faithful geyser.