10 Most Breathtaking Canyons In The World 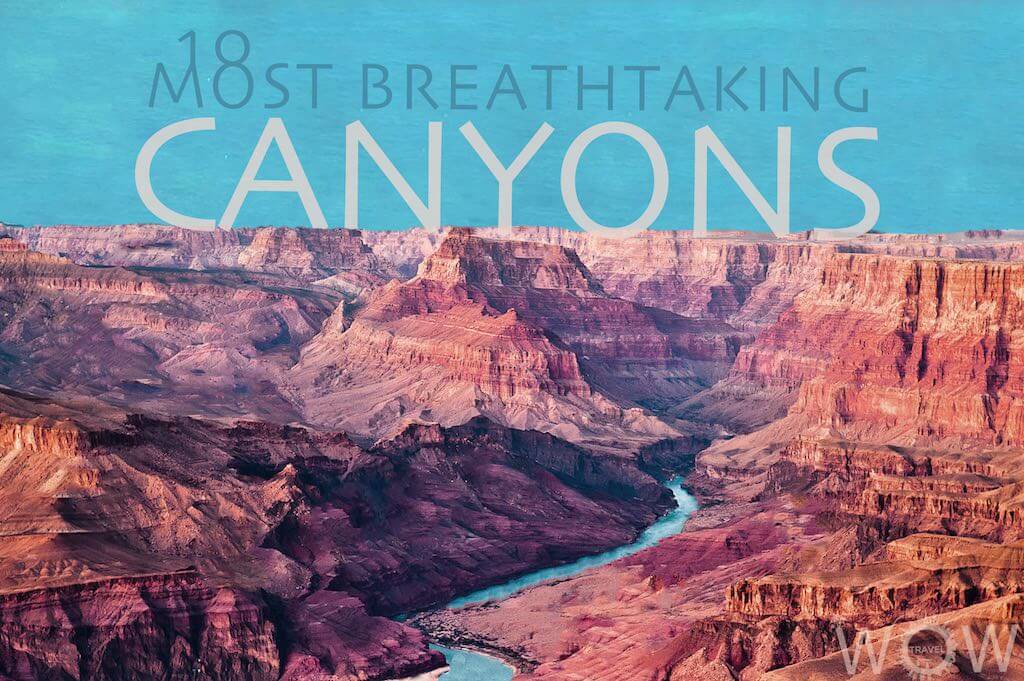 Carved out over millions of years, by the elements, canyons are undoubtedly one of the world’s most amazing natural wonders. They can be less than 3 feet across yet well over thousands feet deep! Hidden away, and with walls that remind us of abstract art. These canyons hold great beauty and every single one is unique, beautiful and has the attraction that no place on earth presents. Here are the 10 Most Breathtaking Canyons In The World.

Carved 100 meters (328 ft) deep into volcanic rock, and ranging at least 2 km (1.24 mile), this canyon is an impressive sight. The Fjaðrárgljúfur Canyon is located in south east Iceland not so far away from the village Kirkjubæjarklaustur. The river Fjaðrá runs through it. It was created by progressive erosion by flowing water from glaciers through the rocks over 9000 years ago.

The Gorges du Verdon, also called the Grand Canyon du Verdon, is a spectacular canyon that forms a border between the Alpes-de-Haute-Provence and the Var. Up to 700 m deep, the 21-km-long canyon varies in width between 6 and 100 m at the bottom and 200 to 1500 m at its rim. Although it’s much smaller than Arizona’s Grand Canyon, the Gorges du Verdon is deep, compact, wild and beautiful. Source: beyond.fr

Antelope Canyon in Arizona on the Navajo Indian Reservation is the most photographed slot canyon in America. It’s a sacred and spiritual place. Serene and mystical. A quiet reverence. A special work of art created by nature. An unimaginable blend of glowing pastel colors made brilliant by cascading beams of sunlight that illuminate an artful collection of sculpted sandstone in infinite shape and form. Source: arizona-leisure.com

The Kali Gandaki, known locally as Andha Galchi, is a stunning gorge in the Himalaya Mountains of Nepal. Some experts state that it is the deepest gorge in the world. The gorge actually divides two massive mountains. To the west is Dhaulagiri  8,167 meters (26,795 ft) high, while to the west lies the majestic peak of Annapurna standing at  8,091 meters (26,545 ft). The Kali Gandaki river, which runs between them, stands at an elevation of 2520 meters (8,265 ft). So theoretically there is a difference of over 5,487 meters (18,000 ft) between the gorge floor and the rims. Source: gorges-to-visit.com\

About 100 km (62 miles) northwest of Lijiang Old Town in southwestern China, lying between Jade Dragon Snow Mountain and Haba Snow Mountain is Tiger Leaping Gorge, one of the deepest canyons in the world with a good path high above the Yangtze River to get away from the throbbing roar of the river and inexpensive accommodations along the way.

Colca Canyon is a canyon of the Colca River in southern Peru. It is located about 160 km (100 miles) northwest of Arequipa. It is more than twice as deep as the Grand Canyon in the United States with 4,160 meter (13,648 ft). However, the canyon’s walls are not as vertical as those of the Grand Canyon. Since they are such major features of the landscape. The Colca Valley is a colorful Andean valley with towns founded in Spanish Colonial times and formerly inhabited by the Collaguas and the Cabanas. The local people still maintain ancestral traditions and continue to cultivate the pre-Inca stepped terraces. Source: colcacanyon.info

The Fish River Canyon in Namibia is (allegedly) the 2nd largest canyon in the world after the Grand Canyon. The immensity of this magnificent landscape is truly breathtaking. The towering rock faces and deep ravines were formed by water erosion and the collapse of the valley due to movements in the earth’s crust over 500 million years ago. Today the canyon measures 160 km  (99 mile) long up to 27km (17 mile) wide and almost 550m at its deepest. It is fair to say that when you arrive at the canyon though, its exact location is a bit of a mystery as the 500 meter (1804 ft) vertical drop from the flat dry plateau is completely out of view. Source: namibian.org

The Samaria gorge, located in Crete, Greece, is the longest one in Europe and it is an area of stunning natural beauty. Rare flora and fauna have survived in this area and are protected. The mountains that have formed it are wild, high and steep. The gorge of Samaria is the second most visited tourist attraction on Crete (following the Minoan palace of Knossos) and by far the most popular walk. More than a quarter million people walk through the gorge every year from May to October. Source: agiaroumeli.com

Copper Canyon (Barranca del Cobre) is a region in Northwest Mexico providing some of the most spectacular scenery in all of Mexico. The Copper Canyon area is a series of 20 canyons, formed over the years by six rivers. The canyon is the traditional home of the indigenous Raramuri (Tarahumara) people and is a UNESCO World Heritage Site. The majestic Copper Canyon spans more than 600 km (372 miles) in length and 250 km (155 miles) in width and it can be explored by the Chihuahua al Pacífico railroad. The Copper Canyon railway described as the most dramatic train ride in the Western Hemisphere, this 400-mile train ride traverses 37 bridges and 86 tunnels en route between Chihuahua City, Chihuahua and Los Mochis. Source: coppercanyoninsider.com

Vast, magnificent and inarguably beautiful. The Grand Canyon is found in the US state of Arizona, it is easily Arizona’s most distinguishable landmark and many people consider it to be one of the seven wonders of the natural world. Stretching 446 km (277 miles) from end to end, steep, rocky walls descend more than 1800 meters (6000 ft) deep to the canyon’s floor, where the wild Colorado River traces a swift course southwest. At its widest point, the Grand Canyon stretches 29 km (18 miles) across, while at its narrowest point it stretches 6.4 km (4 miles) across. The different types of rock visible in the Grand Canyon make it an important site for geological research, the rock found at the bottom of the Grand Canyon (schist) is around 2 billion years old.