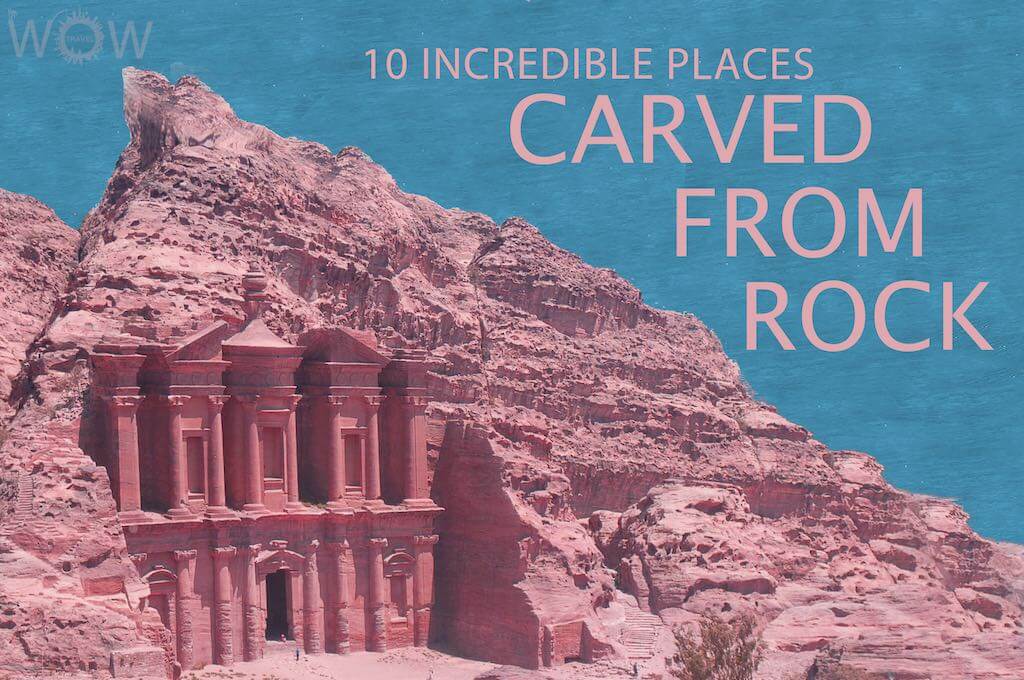 Rock-cut caves provided the first abode to ancient man. Whenever he felt the need for a secure place safe from invading enemies or natural calamities, he found his stronghold in these caves. With tools and architectural expertise at his disposal, he would carve out beautiful castles, temples, and cities from rocks, caves, and mountains from time to time. Today, these amazing places stand as a testimony to our history, culture, and civilization, with each telling a story. Here is a list of 10 incredible places carved from rock.

A fascinating city carved out from rose-red sandstone on the slopes of Jebel al-Madhbah Mountain, south Jordan, in Petra, which is more than 2,000 years old. Once the capital of the Arab Nabataeans, it was a flourishing ancient city contemporary to Greek and Roman periods. Located at the end of a 1,200-meter-long narrow rocky gorge, Petra is an icon of rock-cut architecture. This UNESCO World Heritage Site is a meeting point of natural, cultural, archaeological, and geological significance. Its remnant tombs and temples with intricate stone carvings, water harvesting system, colonnaded street, and amphitheater speak volumes about a thriving civilization dominating the east-west trade amid the barren deserts.

Marvelously chiseled into a 250-ft hillside rock amid green forest and overlooking a riverine gorge, Ajanta is home to 36 caves containing fresco paintings and sculptures associated with Buddhism. Richly decorated, these caves exude great artistic significance as home to masterpieces of religious art. Hollowed out of granite cliffs, the complex dates back to the second century BC, although additions to the architectural marvel continued until 400 AD. The UNESCO World Heritage Site has many monasteries and halls cut into the mountain scarp. The wall paintings in caves tell stories of Buddha’s previous births and are famous for their rich expression, emotional presentation, and opulence of color that survived hundreds of years.

An amazing example of rock art and sculpture, the Longmen Grottoes are home to 2,345 caves, over 100,000 statues, 2,100 types of architecture specimen, 60 shrines, and 2,800 stone inscriptions hand-carved from rocks of Xiangshan and Longmenshan mountains. Spread over a 1,000-meter-long-limestone cliff, the spectacular rock complex dedicated to ancient Buddhist culture took shape over a period of 400 years starting from 493 AD. Fengxian Temple, the most famous cave, houses a colossal statue of Buddha with a 4-meter-long head and a 2-meter-long ear. This stone-carved art museum invites tourists to explore its vivid appearance, artistic treasure, and spectacular cultural symbols.

An entire town carved into a rugged hillside, the breathtaking landscape of Matera emerged from pre-historic settlements dug into calcareous rock or overhanging cliffs teetering on the edge of a rocky ravine. The rock-cut town originated 9,000 years ago and has been a place of continuous inhabitation ever since. While rulers and empires came and went, cave dwellers of Matera continued to carve out and renovate caverns, cisterns, homes, churches, and tombs from volcanic rocky landscape bringing into existence one of the biggest yet unusual spectacles in human history. Once an off-the-beaten-track destination and home to the world’s only cave museum, the rock-cut town is a hit with moviemakers.

The Puebelo people were masters of artwork chiseled into cliff faces, and Mesa Verde stands a testament to this. Located in Montezuma County of southwest Colorado, the site of 600 cliff dwellings was home to a thriving community between 600 AD and 1300 AD. Though a hunter-gatherer tribe, dwellers made outstanding use of natural curves of rocks to create rooms and even multistory structures of sandstone. Here, you can climb ladders, crawl through tunnels, and discover 5,000 historical sites while taking a sojourn through America’s unexplored history.

These ancient tombs were meant to be an epithet for the dead, but their ornamental carving directly into the cliff face turned them an architectural wonder on a rock. Built around 350 BC, these tombs resembled the façade of palatial houses and were designed with a strong belief in an afterlife. Elaborated relief carvings depict the dead resting in these tombs as well as historical episodes of the period. The quality of stone masonry on these funerary monuments is stunning, and this makes them stand out from other Hellenistic historical ruins.

Among the largest rock-cut religious complexes in the world, Ellora boasts 34 magnificent monuments carved from rock. Designed as celestial cars, these majestic rock-carved structures endowed with astute sculpted beauty belong to Hindu, Buddhist, and Jain traditions. The Kailasa Temple, the centerpiece, is the chiseled out of a single rock. Spread over an area greater than the Parthenon of Athens, it is the world’s largest monolithic structure. The Buddhist quarter has multistory buildings carved into granite rocks. A unique artistic creation with elaborate religious art and carved shrines, Ellora complex was built from 600 AD to 1000 AD.

A part of the Cappadocia region of Turkey, Goreme is famous for its “fair chimney.” It has abundant houses, religious places, shops, and animal shelters carved into volcanic stones. Made of soft rocks topped by hard stone, these pillar-like hoodoos were created following volcanic eruptions and consequent wind actions. When rival empires from Mesopotamia, Anatolia, Persia, and Greece clashed frequently to establish their dominance around 1500 BC, locals took refuge in these rock shelters and dug out churches, monasteries, and houses, creating an underground town. The present town and much of its structure dates back to the 4th century and has significant remnants of the Byzantine art.

Far beyond the shadow of enormous pyramids stand two massive temples of Abu Simbel close to the border with Sudan. Carved out of a solid mountainside over a period of 20 years, these incredible temples guarded over by four huge statues of the pharaoh were among the grandiose monuments built by Pharaoh Ramesses II. While one was to celebrate his victory over the Hittite Empire at the Battle of Kadeshin 1274 BC, the other was to commemorate his love for his favorite queen Nefertari. About 3,200 years after Abu Simbel temples were cut out of sandstone cliffs, the entire rock complex was relocated in a gigantic effort to save it from flooding caused by the Aswan Dam.

Revered as a treasure of the beautiful and well-preserved medieval frescoes, the complex has churches, chapels, and monasteries carved from rocky cliffs. Different from usual orthodox hermits, rock-hewn churches of Ivanovo are dotted with murals of the Tarnovo School of painting. The monolithic religious site came into existence in the 13th century and continued to be an important monastical place until 1700 AD. Once it was home to as many as 40 churches and 300 premises. Positioned amid exceptional natural surroundings, it is a treasure of mediaeval artistry, centuries-old indented inscriptions, and palaeologan iconography.