Top 9 Things To Do In Tanzania 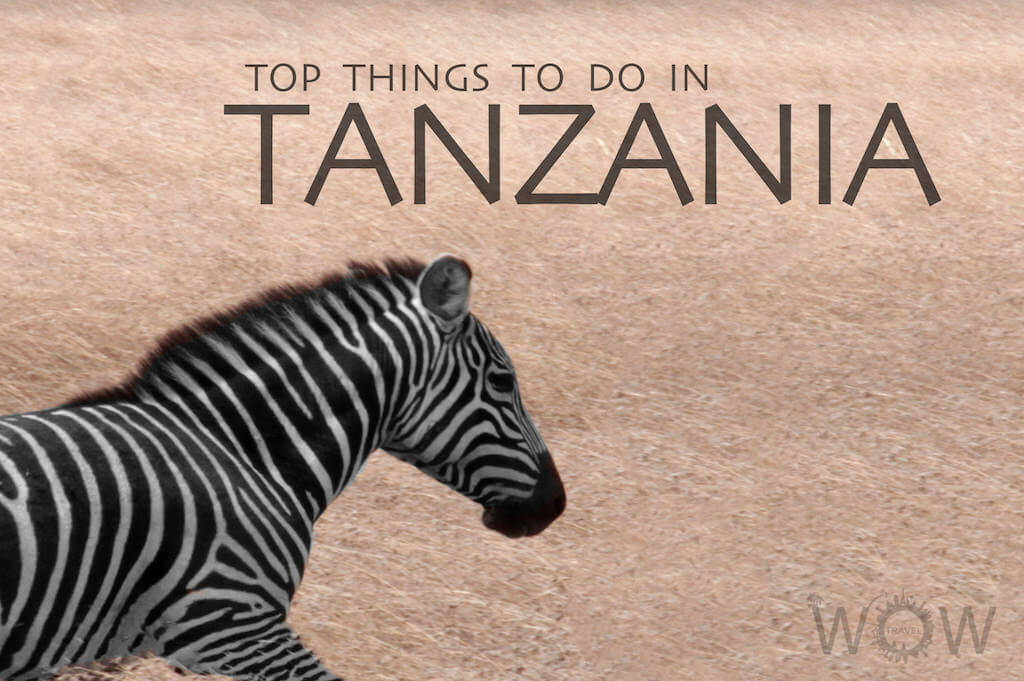 Located on the east coast of Africa, to the south of the equator, Tanzania is famous for Mount Kilimanjaro, the Serengeti National Park, the Masai people, and the idyllic beaches on Zanzibar. The parks are priceless, the cultures endangered, the diversity of habitats incomparable and the wildlife experiences among the best on earth. Tanzania has the largest concentration of wildlife animals per square km, with more than 4 million wild animals and representatives of 430 species and subspecies. Check out our Top 9 Things To Do In Tanzania.

Forming a part of the Serengeti ecosystem, the Ngorongoro Conservation Area houses the Ngorongoro Crater and the Olduvai Gorge. The Ngorongoro crater is the world’s largest inactive caldera (a cavity that results from the collapse of land after a volcanic eruption) at 610 metes (2001 ft) deep and covering 260 square km (100.3 square mile). Mostly grassland with two small wooded areas, the crater is home to the densest permanent concentration of wildlife on earth, including the Big 5 and in particular, Black Rhinoceros. The area is also known for one of the most important paleoanthropological sites in the world, Olduvai Gorge. The gorge is a 48 km (30 miles) long deep ravine that tells the story of early human evolution from homo habilis who occupied the area 1.9 million years ago, through to its occupation by homo sapiens 17,000 years ago. Source: kevandemgoglobal

Only 90 minutes drive from Arusha and barely an hour from the Ngorongoro Crater. Lake Manyara National Park is home to East Africa’s largest and only pink flamingo breeding ground (July-October). It comprised of the huge lake, forest, grasslands, woodland and swamps. The park has good wildlife and is known for its legendary tree-climbing lions and impressively tusked elephants. Large buffalo, wildebeest and zebra herds congregate on the grassy plains. The hippo pool is a good place to see these creatures up close. The lake is a seasonal home to large flocks of flamingos and a wide array of waterbirds can be found on the shore at all times. To see the park at its best, we recommend that you either stay within the park or spend two nights somewhere close, entering the park early for a full-day safari.

Zanzibar is a Tanzanian archipelago of 50 islands, about 25 km off the coast of Tanzania. On Unguja Island, the largest and most populous island (also referred to just as Zanzibar Island) is Stone Town, a historic trade center with Swahili and Islamic influences. It has crumbling coral-rag palaces, winding, walled alleyways, and a history steeped in spices. For those wanting to explore into the interior of Zanzibar, 4×4 excursions are popular, and the Jozani Chwaka Bay Conservation Area is the best place to experience the surviving mangrove forests.

Tanzania’s oldest and most popular national park, also a world heritage site, the Serengeti National Park lies in Northern Tanzania and covers an area of about 14,760 square km (5,699 square miles). It is renown throughout the world as an area of great wildlife viewing and particularly famous for the huge herds of wildebeest and zebra that migrate. The annual migration is really impressive, some six million hooves pound the open plains, as more than 200,000 zebra and 300,000 Thomson’s gazelle join the wildebeest’s trek for fresh grazing. Yet even when the migration is quiet, the Serengeti offers arguably the most scintillating game-viewing in Africa: great herds of buffalo, groups of elephant and giraffe, thousands upon thousands of eland, topi, kongoni, impala and Grant’s gazelle, and more than 2,000 lions are poised to pounce on unsuspecting prey.

One of East Africa’s busiest ports, Dar es Salaam is Tanzania’s former capital, largest city and commercial center. However, Mount Kilimanjaro, the northern circuit of African wildlife and the island of Zanzibar, are the reasons why many tourists that visit Tanzania, miss the largest city altogether. Visit Dar Es Salaam Fish Market, and watch fisherman bring in their daily catches, walk along Mandazi Roadand mix and mingle with the locals in of amny bars and cafes, explore Coco Beach or visit the National Museum and get a glimpse in to Tanzania’s heritage and culture through its engaging exhibits. Read more about all these on top things to do in Dar es Salaam.

Accessible only by boat or by air, Mahale Mountains National Park is known to be among the most isolated and beautiful parks on the African continent. With dots of isolated, golden sandy beaches framed by jungle-covered peaks, Mahale covers 1,613 square km (623 square miles) of rugged terrain along the eastern shores of Lake Tanganyika. Famous for containing some of the last remaining wild chimpanzees in Africa, Mahale is home to a population of approximately 800 to 1000 chimpanzees. Successive teams of Japanese researchers have quietly conducted some of the most important scientific work on these primates from as early as 1961, habituating what is known as the M Group, thus allowing for excellent encounters with this group of about 60 individuals. Source: mbalimbali

Ruaha National Park is Tanzania’s largest, a vast wilderness in the south-west of the country visited by only a handful of travellers each year. At the park’s heart is the aptly-named Great Ruaha River, a massive watercourse that dwindles to only a few pools in the dry season, but bursts its banks and roars over boulders at the height of the rains. Converging with the Great Ruaha are hundreds of sand rivers, natural game corridors when dry and sparklingly clear streams when wet. Waterbuck, impala and the world’s most southerly Grant’s gazelle risk their lives for a sip of water – the shores of the Ruaha are a permanent hunting ground for lion, leopard, cheetah, jackal, hyena and the rare and endangered African wild dog. Ruaha’s elephants are recovering strongly from ivory poaching in the 1980’s and remain the largest population in East Africa. Ruaha represents a transition zone where eastern and southern species of flora and fauna overlap – lesser and greater kudu co-exist with northern species such as Grant’s gazelle. Source: ruahanationalpark

Rises above the jungle plains at 5,893 meter (19,336 feet), snow-capped Mount Kilimanjaro in Tanzania is Africa’s highest peak and the world’s tallest walkable mountain. Kilimanjaro is unique, during the ascent you will climb through five different ecosystems all climatological zones. Starting in tropical rain forest through moss and desert to the snow on the summit. I strongly recommend reading “Trekking in East Africa” by Lonely Planet. Climbing Kilimanjaro is a must-do challenge for almost every trekker and mountaineer in the world., though hikers are forbidden to climb the mountain without a guide.