Top 12 Things To Do In Dar Es Salaam 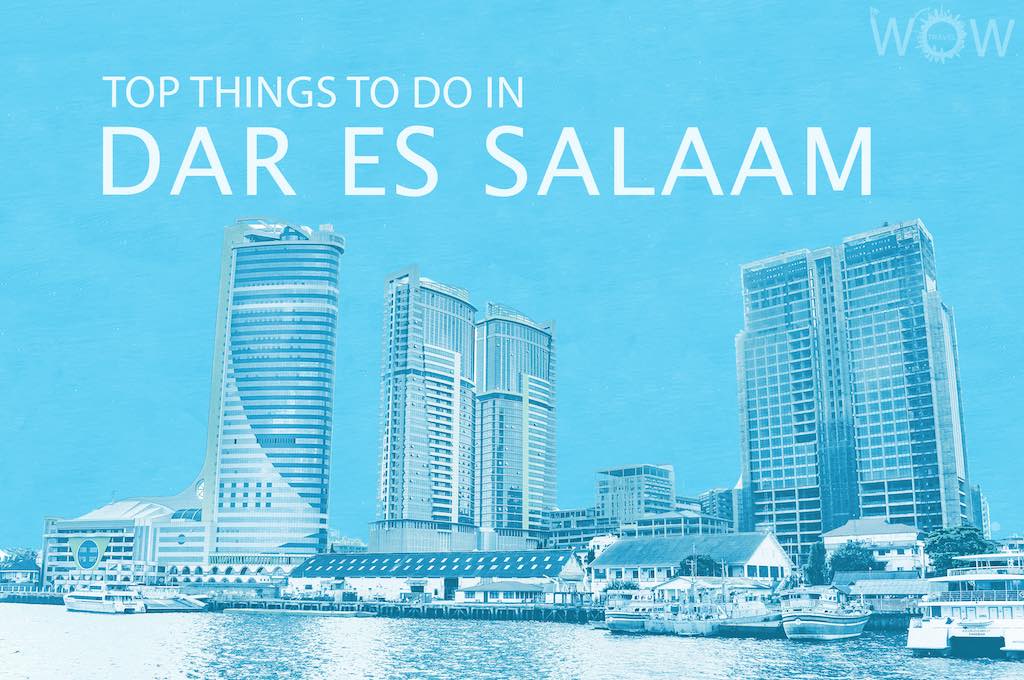 It is hard to imagine that Tanzania’s most populated city and former capital, Dar es Salaam, was once a small fishing village. The city was founded by Sultan Majid bin Said of Zanzibar in the latter half of the 19th century but fell into decline after his death. The town witnessed a revival in 1887 when a station by the German East Africa Company was established here. German influence on the city is evident in the architecture of a few buildings in different parts of the city. Today, Dar es Salaam is ranked amongst the leading cities of Africa such as Nairobi, Johannesburg, and Lagos. It is a leading financial center in Tanzania and the most prominent city in arts, fashion, music, film, and television. Visitors to the city marvel at the eclectic vibe that it has, thanks to the fusion of African, Indian and Arabic cultures.
[booking_product_helper shortname=”dar es salaam”]

The Gothic Azania Lutheran Church with its whitewashed walls and red belfry that overlooks the other buildings in the region is a striking landmark of the city. Built in 1898 by German missionaries, the iconic church is a remarkable example of the Bavarian-style of the time. The church which was once the center of the German mission now serves as the cathedral for the diocese.

Coco Beach is synonymous with the upscale residential area Oyster Bay, which is home to many expatriates. The white sandy beach just six kilometers north of the city is a huge draw for locals and visitors, especially on the weekends. It’s a great place to grab a cheap bite from the numerous stalls that are set up in the area or to just soak in the beach vibe with its live music.

Close to the Botanical Gardens on Shabban Robert Street you’ll find the National Museum & Cultural Center. The museum which was opened to the public in 1940, gives visitors a deeper insight into Tanzania’s past and also the earliest human ancestors. Fossil remains of humans that were discovered at Olduvai Gorge by renowned paleoanthropologist Louis Leakey are displayed here. A small collection of vintage cars including a Rolls Royce used first by the British colonial government and then by Julius Nyere is also on display here. The house of culture which is part of the new extension doubles up as a contemporary concert venue and an educational resource center.

The Bongoya Island which makes up one of the four islands of the Dar es Salaam Marine Reserve (DMRS) is the most visited of the four. Visitors and locals enjoy snorkeling or sunbathing on the two beaches that are part of the uninhabited island. The beach on the northwestern tip of the island is more popular with visitors because of the few facilities that are available here. On the other hand, the northeastern beach is practically deserted and has no facilities. The rest of the island is covered in thick forests and has a few walking trails.

A good place to head to for a relaxing time is the Botanical Gardens. The shady garden with an enchanting mix of indigenous and exotic plants is a good respite from the concrete jungle that makes up the city. Established in 1893 by the first Director of Agriculture, Professor Stuhlman the gardens initially served as a testing ground for cash crops. The Dar es Salaam Horticultural Society is still located within the grounds.

The iconic Roman Catholic cathedral is prominently located along the harbor front. Built between 1897 to 1902 by German missionaries, the Gothic St. Joseph’s Cathedral is now the seat of the Dar es Salaam archdiocese. The stained glass windows behind the altar, the shingled spire, and the vaulted interior are some of the notable features of the cathedral. For a soul-stirring experience, make your way to the church on a Sunday morning when the local choir sings.

This open-air ethnographical museum was set up in 1967. Located on the outskirts of the city on the road to Bagamoyo, the museum showcases different huts belonging to various ethnic groups of Tanzania. The houses are furnished with traditional items and also surrounded by small plots with crops. Spread over 15 acres the museum aims to provide visitors with a deeper understanding of Tanzania’s ethnic groups. Cultural activities, music and even tribal dances make up this museum experience.

One of the most poignant sights in the War Cemetery is the large memorial that commemorates the names of 1,500 officers and men of the Commonwealth who lost their lives in East Africa during and after January 1917 but have no known grave. The War Cemetery was established in 1968 when the initial war graves at Ocean Road had to be moved because of the construction of a new road. There are 1,770 Commonwealth graves from the First World War, of which 67 are unidentified and 34 from the Second World War.

This beach which is located 10km from the city center is easily accessible by ferry or over the Kigamboni Bridge. The clean white sand beach is good for sunbathing and the water is also safe for swimming as there are no rocks. A good idea is to leave early from the city and plan a whole day at the beach to avoid traffic jams. The entry fee at the beach can be redeemed against drinks at the bar.

This is another popular island that makes up the Dar es Salaam Marine Reserve. A 20-minute boat ride from the mainland brings visitors to the pristine beaches of the island. The turquoise waters and white sandy beaches attract locals and foreign visitors. Unlike the beaches near the mainland where swimming is dependent on the tide, the beaches here are good for swimming at any time. If you’re lucky you may just catch a glimpse of dolphins in the surrounding waters. Food and soft drinks are available on the beach as are the thatched huts which are rented out.

To truly feel the local vibe, the Mzizima Fish Market is the best place to experience it. The best time to visit is early morning when the fishing boats come in. Once the catch is offloaded it is auctioned to the public and local restaurants. The auctioning is great fun to watch as locals try to outdo each other in getting the prized catch. You can even sample some freshly cooked fish if you’re interested.

The lone soldier with his bayonet pointing towards the harbor stands prominently in the center of the roundabout between Samora Avenue and Maktaba Street. The bronze statue that was unveiled in 1927 is a grim reminder of one of the most tragic times in history. This memorial to the Askari soldiers who fought in the British Carrier Corps in the First World War was created by British sculptor James Alexander Stevenson in England. It was then sent to Dar es Salaam where it was first exhibited at the Royal Academy. It makes up one of three Askari Monuments that were unveiled in the same year in different parts of East Africa. The other two are located in Mombasa and Nairobi.