Top 12 Things To Do In Nairobi 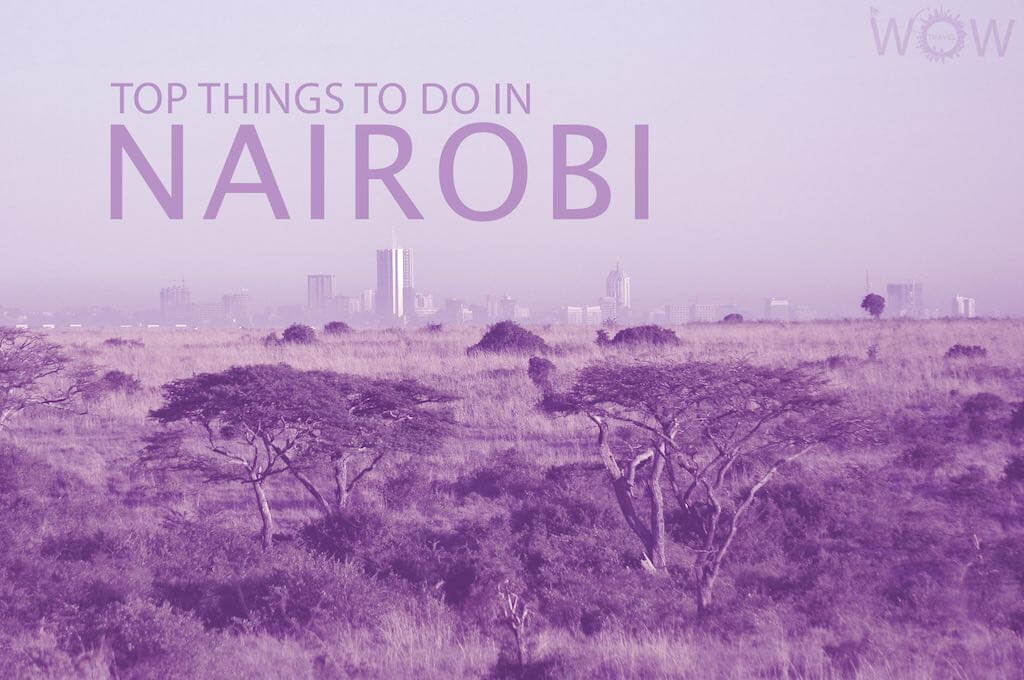 The name of Kenya‘s capital and largest city, Nairobi, is derived from the Maasai phrase ”Enkare Nairobi” which literally means ‘cool water’ Founded in 1899 by the colonial authorities, the town expanded rapidly and in 1907, replaced Mombasa as the capital. Today Nairobi has the distinction of being East Africa‘s most cosmopolitan city with contrasting opinions about life here. The vibrant culture and exciting nightlife vie for its place with the rather ‘notorious’ reputation that the city has about the poor safety levels.  However, there is no denying the rich experience that a visit to the city has to offer. From a beautiful national park just on its borders to the history and traditions that are showcased in the various museums and a pulsating nightlife, there is much that makes Nairobi special.
[booking_product_helper shortname=”nairobi”]

Just seven kilometers from the city center is the National Park with its lions, gazelles, zebras, rhinos and other species. The rhino sanctuary has about 50 of these critically endangered species. A monument in the park marks the historic spot where 12 tons of elephant tusks and rhino horns were set on fire by President Moi in 1989, to sound out a clear warning to poacher and raise awareness of the country’s conservation efforts. The Hippo Pool and lookout are some interesting points to look out for in the park.

The Sheldrick Wildlife center which is located at the main gates of the National Park should definitely be on your itinerary if you are an animal lover. Founded in 1977, by Daphne Sheldrick in memory of her late husband, the center cares for young abandoned rhinos and elephants. It’s a treat to watch the baby elephants drinking from giant baby bottles or playing around in the mud. Money collected from the entrance fees goes towards supporting the conservation efforts of the project.

This live museum located 10kms from Nairobi celebrates the diverse tribes of Kenya. Visitors to the center can experience and learn more about the lifestyle, and cultural aspects of each tribe. Traditional bomas or villages have also been recreated to give visitors a better understanding of the traditions and cultures of the ethnic groups. There are also live performances by resident artists at the large theater located here.

The Kazuri Beads Factory is a great place to go to pick up some genuine souvenirs for family and friends while contributing to a larger cause. A tour of the factory will reveal how beads and other pottery items are made from scratch. The meaning of Kazuri is ‘small and beautiful’ and these beads definitely fit the definition. They’re quite reasonably priced so don’t be afraid of burning a hole in your pocket with your visit here.

The iconic Kenyatta International Conference Center (KICC) was named after the first president Jomo Kenyatta. This internationally acclaimed venue hosts various, exhibitions, meetings and conferences. The 28 stories cylindrical tower with its fusion of modern and traditional African styles stands out quite prominently against the Nairobi skyline. For a fee, you can visit the viewing platform on the topmost floor or the helipad to get a bird’s eye view of the surroundings. On a clear day, you can also see Mt. Kenya in the distance.

The Langata Giraffe Center is probably one of Kenya’s most successful conservation stories. Located about 20km from the center of Nairobi, the center was started with two baby giraffe in 1979, by Jock Leslie-Melville and his wife Betty. At that time, the Rothschild Giraffe was in grave danger of extinction with just 120 of the species remaining. Today with the tireless efforts of the center, the number has more than doubled with over 300 giraffes. Visitors to the center can enjoy feeding the animals from a raised platform at eye-level. Located close to the center is the 5-star Giraffe Manor where giraffes wander freely and often surprise guests staying at the property by popping their heads into the windows.

Relics from the East African Railway such as photographs of the original construction, railway magazines, maps and drawings, and a few oddities are showcased in an old railway building which houses the museum. The museum which is adjacent to the Nairobi Railway Station was opened in 1971. On the grounds of the museum are a huge collection of old locomotives dating from the steam engines to independence. One of the most visited exhibits is the carriage that was used in the movie ‘Out of Africa.’

The pointed green hills on the outskirts of Nairobi derive their name from a spring located near Ngong Town. You can get a good view of the Nairobi National Park from the eastern slopes, while the north provides a great view of the city. On the eastern slopes, you’ll also find the solitary grave of Denys Finch Hatton, author Karen Blixen’s lover. The grave is marked by an obelisk and a garden. The westside slopes overlook the Great Rift Valley where many white settlers set up their farms and built homes during the colonial days. Some of the colonial homes with their flowering gardens still stand. There are several walking trails which offer beautiful views of the valley.

The former home of the renowned author of the popular ‘Out of Africa,’ located at the foot of the Ngong Hills is a popular attraction. Karen Blixen lived in the house from 1917 to 1931 where she also had a coffee plantation. The author’s life in colonial Kenya is brought to life through the tour of the well preserved colonial farmhouse and its surrounding. Memorabilia belonging to Karen Blixen is also on display.

The African Heritage House is a stunning piece of design that incorporates a range of traditional construction styles from across Africa. The interior of this mud house is furnished with artworks and tribal artifacts. Overlooking the National Park, off the Nairobi-Mombasa highway, the house was designed by an African heritage expert, Alan Donovan. A 90-minute tour of the property by the owner himself will give you a deeper insight into the rich history and culture of Africa. To visit the house you will need to make a prior reservation. There is also the added option of an overnight stay for those who have some money to spare.

The Kitengela Hot Glass located in a planetarium dome on the edge of the National Park, is an interesting visit. Recycled glass has been used to create the colorful, quirky surroundings. A mosaic pathway leads to the various workstations of artisans. Visitors can watch the glass blowing demonstrations or marvel at the huge variety of glass pieces at the store. A small café nearby offers snacks and drinks and some great views onto a gorge.

Like most national museums, the Nairobi National Museum also gives visitors a deeper insight into the diverse cultural and natural history of the region. However, the museum is so much more than just a mere walk through history. There are various enthralling exhibition spaces within the imposing building like the Birds of East Africa exhibition, Great Hall of Mammals and the Cradle of Humankind exhibition. The Hominid Skull room is also a fascinating place to visit for the extraordinary collection of skulls. A life-size fiberglass model of Ahmed the famous elephant of the 1980s, occupies the inner courtyard near the shop.