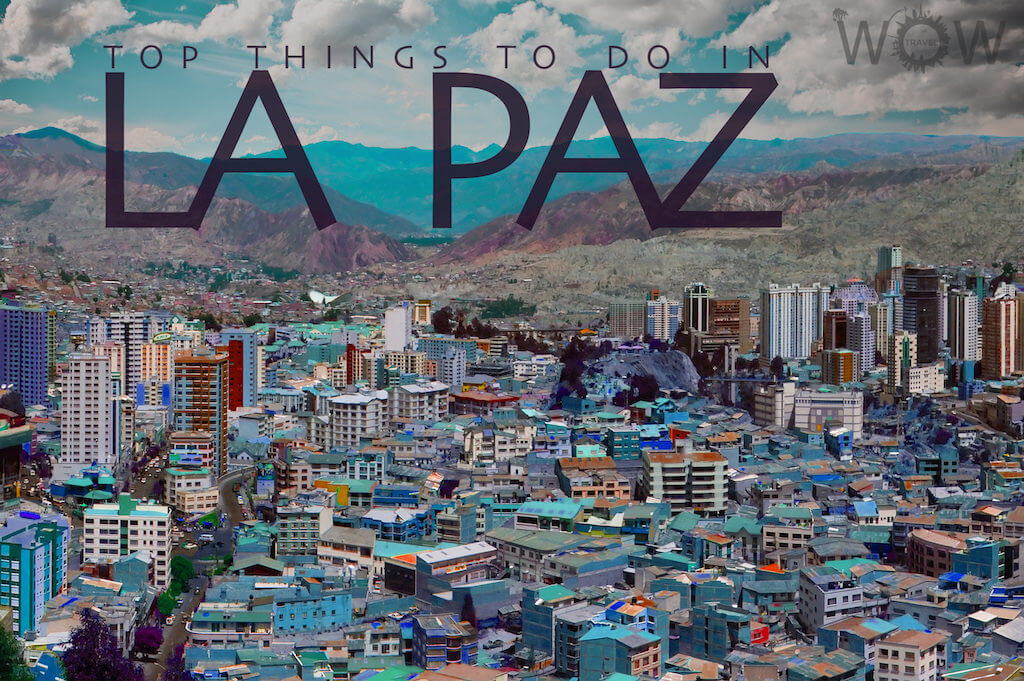 The capital of South America’s poorest country has a mix of modern capitalism, Spanish colonialism, and ancient Inca traditions. While not the official capital of Bolivia, which would be Sucre, La Paz has more government departments. It nestled in a valley and scrambling up hills more than 3658 meters (12,000 ft) above sea level makes it the highest capital city in the world. La Paz is a unique city of contrasts – the downtown high-rise office buildings, the Bolivian women in their traditional skirts and top hats, the new, modern cars speeding past donkey-drawn carts. with so many things that simply cannot be missed, WOW Travel picks the Top 10 Things To Do In La Paz.

See historic architecture, watch street performers and browse the stands of handicraft and food markets at this lively central square. In front of the Plaza you will find an imposing church called San Francisco church, with a blend of mestizo and Spanish baroque styles.

Nuestra Señora de La Paz (Our Lady of Peace) was founded by the Spanish conquistadors in 1548 on the site of an indigenous settlement. The architectural heritage from the Spanish is still very much present at Calle Jaen, preserved as a pedestrian-only thoroughfare in the heart of La Paz. The narrow, cobbled street is one of the top attractions for visitors on a tour of La Paz, full of colourful buildings, lanterns and ironwork balconies. Several museums can also be found along the street, including the Museo Nacional de Arte (see number 5) and the Museo de Litoral, which exhibits items from the war of the Pacific (1879 – 1884). Bolivia came out of the war having lost its coastal territory to Chile, but keep an eye out for the defiant sign on the museum, which claims: ‘Bolivia has not lost and will never lose its right to the Pacific’. Source: southamerica.travel

Located near the Iglesia de San Francisco, the Witches’ Market is running down a few narrow streets. It is one of the most unique places in La Paz with cholitas in traditional bowler hats and petticoats sit front of their stalls, offering everything from herbal medicines, superstitious artifacts, trinkets to alpaca blankets and warm Andes sweaters (some even better than the 13 Best Lightweight Sweaters for Women) Yes it’s a tourist market, but it also gives you a fascinating insight into Bolivian culture.

On a Sunday night, high up in the mountains of El Alto you can watch Bolivian women, suited and booted in their traditional wear, wrestle. it is a one-of-a-kind event. Matches kick off every Sunday in El Alto; just jump in a taxi and say “Luchadores Cholitas”.

Moon Valley is a fascinating geological anomaly  because of its bizarre, moon-like landscape. One of the most popular attractions in La Paz, Moon Valley features a few kilometers of walking paths that navigate the huge stalagmites and trenches of the valley, carved out of the soil over centuries of erosion by the wind and rain. In addition to its fascinating geology, Valle de la Luna offers impressive views of the Andes Mountains of the Cordillera Real outside the city.

Listed as a UNESCO World Heritage Site in 2000, Tiwanaku is an ancient archaeological site named after one of the most important ancient civilizations prior to the Inca Empire. The Tiwanaku ruins are located next to the small village of Tiwanaku high on the Altiplano, located along highway 3 that heads West from La Paz to Lake Titicaca.

Mirador Killi-Killi is an observation point in La Paz, Bolivia, situated between Villa Pabón and Plaza Abaroa. Climb the flight of stairs, take a few minutes to catch your breath, and enjoy the panoramic view of La Paz.

High above Zona Sur and central La Paz, lies El Alto, a city within itself that has exploded over the years (with a population of nearly 1.5 million people) as Bolivians migrate from the countryside into the city. It is one of the highest major cities in the world at 4150 meter (13,615 ft). Its open air market, the biggest in all of Bolivia, sells everything you can think of, and it’s a true Bolivian experience.

La Paz is a tough city for mass transit. It was built by Spanish conquistadors, who laid out narrow, winding streets, and sits in a bowl-like depression with neighborhoods rising up the craggy slopes of the Andes Mountains. The Swiss-made gondolas have polished wood benches and broad, tinted windows. Unlike exhaust-belching buses, they run on electricity and make hardly any noise. Currently three lines are in operation (red, yellow and green), and the construction of five additional lines by 2019 will make it the largest urban cable car system in the world. One thing for sure, the views of La Paz and the Andes behind floating high above the sky are utterly breathtaking.

Cycle The World’s Most Dangerous Road also know as La Carretera de los Yungas. Every day tourists pedal the 69 km (43 mile) road and it does come with caution, it is terrifying.  This downhill path is extremely narrow, with a precarious and steep ledge. Before 2006, Death Road was the only connection between La Paz and the jungle. During this time there were about 25 cars and about two bikes per year that would fall over the edge. Tour companies arrange trips, including transport, bikes & equipment, guides, videos & photos and meals and a National Park entry fee.