The 12 Most Beautiful Places In Brazil 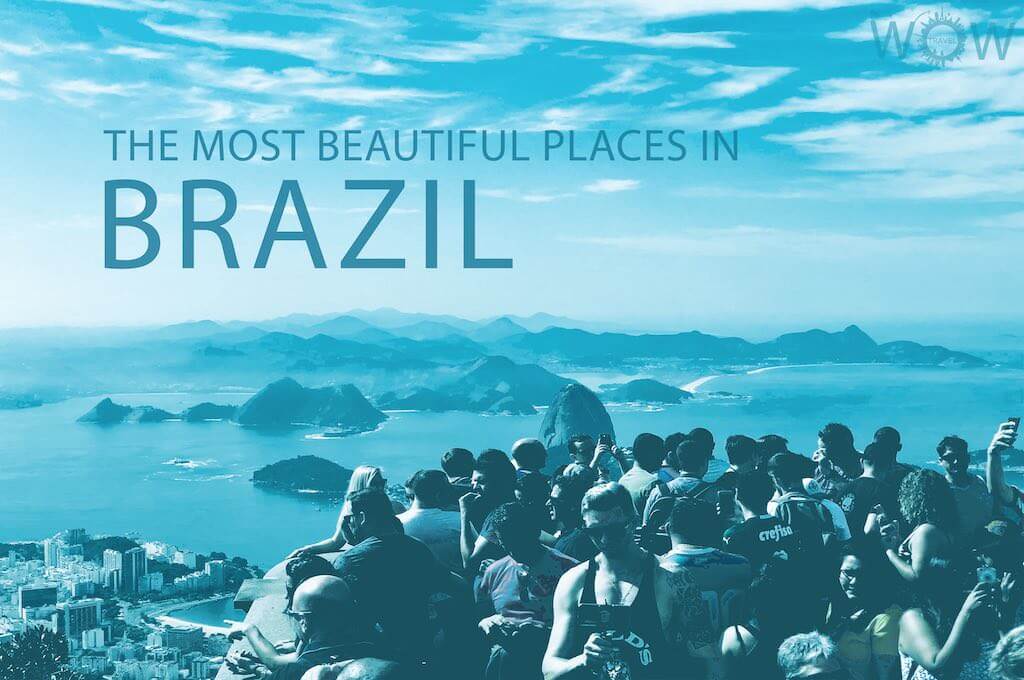 Brazil, the largest country in South America and Latin America is also the fifth largest country in the world. The country which spans such a vast area has plenty of geographical diversity and variations in the landscape. It is no wonder then that the country is filled with some breathtaking sights. From the natural beauty of the Amazon rainforest, the Pantanal, the Iguazu Falls, and the beautiful beaches, to the manmade monuments like the statue of Christ the Redeemer and the Niteroi Contemporary Art Museum, there is much to marvel at in this beautiful country.

This 4km expanse of yellow gold sand located along the shoreline of Rio de Janeiro is one of the most beautiful and iconic beaches of Brazil. Copacabana Beach is not only a visual treat but also one of the most lively places to be, with designated spots for different activities. Here lie some of the best hotels in Rio de Janeiro. Another defining feature of the beach is the promenade with its weaving black and white wave motif created by designer Roberto Burl Marx. Although visitors throng the beach the whole year round, New Year’s eve is when the biggest crowds descend on this stretch to bring in the new year.

To have a jaw-dropping experience the Iguazu Falls is the place to visit. Located on the border of Parana and the Argentine province of Misiones, the waters of both countries combine to make up the largest waterfall system in the world. The deafening roar of the cascades portrays the sheer power of the water as hundreds of waterfalls which extend almost 3kms flow with force. The falls are an astounding sight and one of the most picturesque places of our planet.

The beautiful expanse of sand dunes of the Lencois Maranhes National Park could be mistaken for an arid desert, but the stunning park located on the northeastern coast of Brazil is a kind of paradox. The park which covers a massive area of 155,000 hectares is composed mainly of coastal dune fields and looks like a desert except that it receives an annual rainfall of 1,200 millimeters a year, unlike most deserts that receive less than 250 millimeters. During the rainy season between the months of January and June, the desert land is transformed into a magical place with beautiful lagoons interspersed among the white sands. The stark contrast between the crystal clear lagoons and the sand is a sight that must be experienced to be appreciated.

One of the most popular monuments of Rio de Janeiro is the statue of Christ the Redeemer, popularly known as Cristo Redentor.  The colossal statue overlooks Rio from the summit of a 710m mountain called Mount Corcovado. The largest Art Deco-style sculpture in the world is visible at night from nearly every part of the city when it is brightly lit up! The idea of a statue was first mooted by the Vincentian priest Pedro Maria Boss to honor the princess regent of Brazil but the project was never approved. Permission for the statue was finally granted and the foundation stone was laid on April 4th, 1922. It took almost a decade to complete the statue which was completed on October 2nd, 1931.

The Pantanal is the world’s largest tropical wetland covering an extensive 140,000 and 195,000 square kilometers, an area as big as Washington State. It is also South America’s largest area of biodiversity and boasts the highest concentration of wildlife on the continent. Located in the Brazilian state of Mato Grosso do Sul, the Pantanal also extends into Mato Grosso and parts of Paraguay and Bolivia. The wetlands are the best place to see wildlife in their natural habitats as the open marshes make it easy to spot animals.

The capital city of Bahia is a heady mix of the traditional with the modern and considered one of the birthplaces of Brazilian culture. Salvador stands out for its natural beauty blending in with some spectacular manmade structures like the Elevador Lacerda and its gilded Sao Francisco Church. One of the most iconic parts of the city that is definitely worth visiting is the UNESCO World Heritage, Historic Center or Pelourinho as it is more commonly known as.

This icon of Rio de Janeiro rises straight from the water’s edge of Guanabara Bay. Sugar Loaf Mountain derives its name from the shape which bears a strong resemblance to the traditional shape of concentrated refined loaf sugar.  Its peak which rises 396m above the harbor can be accessed via glass-walled cable car rides which go along a 1,400m route between the peaks of Sugarloaf and Morro da Urca every 20 minutes. The 360-degree view of the surroundings from the top is quite spectacular.

The crown-like hyperboloid structure of the Cathedral Brasilia was designed by renowned Brazilian architect Oscar Niemeyer. Although the cornerstone for the cathedral was laid in 1958, the mainframe was completed two years later. The cathedral is an impressive sight with its 16 curved concrete columns, each weighing 90 tons. This representation of a crown of thorns rises to a height of 131 feet. The inside of the cathedral is as impressive, with stained glasswork and a fiberglass ceiling.

It is said that ‘beauty lies in the eyes of the beholder,’ so what may appear as spectacular to some may not be as appealing to others. Beco do Batman, the area near Vila Madalena in Sao Paulo with its graffiti-strewn walls is definitely a sight worth beholding, but may not hold as much appeal to those who don’t appreciate art in this form. This sanctuary of graffiti attracts the best street artists from the world over who are only too happy to contribute towards embellishing this strip. The name of the area is derived from the first drawing which appeared on the wall in the 80s, that of DC Comics superhero Batman. Local art students soon made their contributions to the walls by painting them with psychedelic and cubist influenced designs. The area is an ever-evolving canvas as new paintings adorn the walls to replace old ones. Some of the best hotels in Sao Paolo is only minutes away from here!

The 152,000 hectares of the Chapada Diamantina national park also referred to as Brazil’s ‘Lost World,’ is located in the northeast state of Bahia. This stunning area of mountains, monoliths, caves, rivers, and waterfalls was declared a national park in 1985 to attract Eco-tourists. Prior to this, it was off-limits because of the lure of diamonds that were found in the region at the beginning of the 19th century. A huge vein of diamonds was discovered by two German prospectors and when the word spread, the diamond rush brought a rush of prospectors who formed the town of Lencois for explorations. The park is renowned for its fabulous underground caves and diving spots but diving is only open to highly qualified divers and spelunkers.

Named after a 16th-century Portuguese nobleman, this archipelago comprising of one main island and 20 smaller islands, is located off the north coast of Brazil. Fernando de Noronha is an eco-wonderland that is fiercely protected and favored by naturalists and marine biologists. Only 480 visitors are allowed at a time on this UNESCO World Heritage Site which comprises some breathtaking rugged landscapes and beautiful beaches.

Escadaria Selaron (Lapa Steps) also known as the Selaron Steps are located between Rua Joaquim Silva in Lapa and Rua Pinto Martins in Santa Teresa. Chilean painter Jorge Selaron created these beautiful steps as a tribute to the city and the Brazilian people. Initially, he only used blue, green and yellow tiles honoring the Brazilian flag, but added color later on. While working on the steps Selaron often ran out of money so he would commission paintings to fund for the renovations of the staircase. The stairs feature at least 60 different countries and are signed by Jorge Selaron: Brazil Eu Te Amo Selaron meaning Brazil I love you – Selaron.