10 Most Stunning Aerial Lifts Around The World 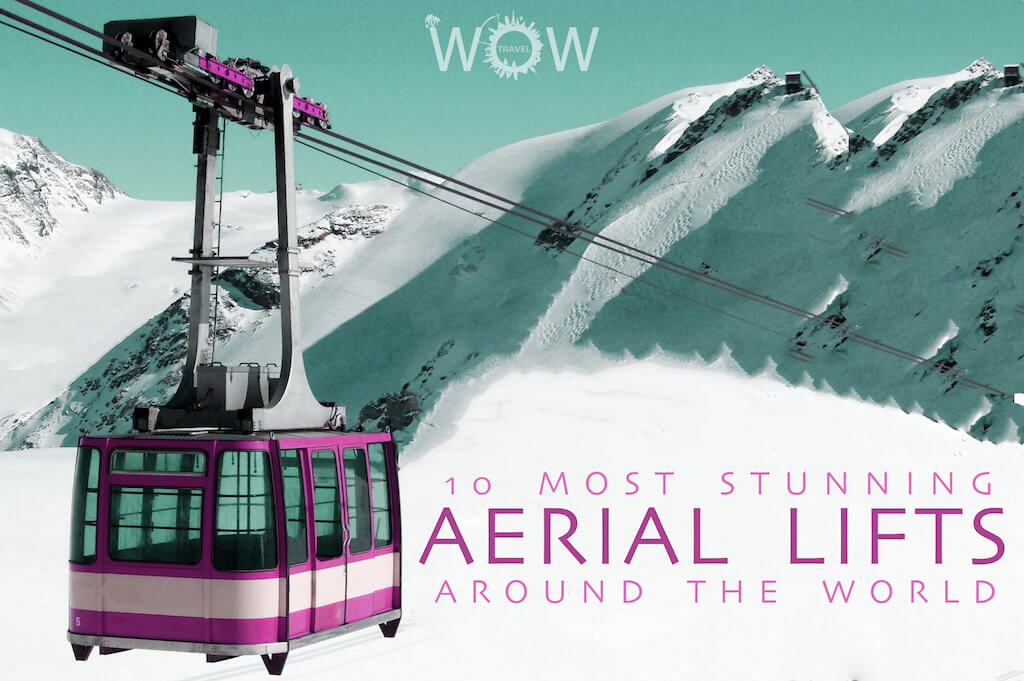 Whether you call it an aerial lift, gondola, cableway or aerial tram it is still just a small box dangling from a thin wire attached to the top of a giant mountain. When transportation and tourism meet, it’s a beautiful thing and you wouldn’t believe the views some of the world’s most incredible aerial lifts provide. From the Table Mountain in South Africa to to the Merida’s Cable Car in Venezuela the Most Stunning Aerial Lifts Around The World will provide you an unforgettable experience with spectacular panoramic views.

Nearly 38 million people have ridden the Sugarloaf Mountain Aerial Tram since it opened in 1912.  Sugarloaf Mountain is an iconic part of the skyline of Rio de Janeiro. This towering granite rock formation rises about 396 meter (1,300 ft) above Guanabara Bay. The journey to the top of Sugarloaf Mountain is divided into two stages, each lasting three minutes, with each cabin able to carry 65 passengers.

Cable-car ride over the Thames river in London. offering birds-eye views of Greenwich Peninsula and the Royal Docks. The cable car trip takes six minutes. The cars, which accommodate 10 people, arrive every 30 seconds. You can use your Oyster and Visitor Oyster card.

It is the world’s longest ropeway conveyor, which measures 96 kilometers. Though it was initially built to transport ore, it has now become a famous attraction. This tramway is between Örträsk and Mensträsk and Ortrask, and it’s also a bi-cable gondola lift that has detachable cabins.

Just to the east of Manhattan is a tiny island called Roosevelt Island. The island is about two miles long and only 244 meter (800 ft) wide at its widest point! Because it is largely residential, it is ignored by most visitors to the city. But there are a few interesting things to see on the island, and the ride there on the Roosevelt Island Tram will provide a breathtaking skyline view of the city. The Roosevelt Island Tramway was born in 1976 as a means to shuttle residents to and from Manhattan. The tramway was only supposed to be temporary until the subway station opened. But when the subway finally connected to Roosevelt Island in 1989, the tram was to popular to discontinue.

Masada, considered as an ancient fortress of Israel, is a UNESCO World Heritage Site that is found on the eastern edge of the Judean Desert and overlooks the Dead Sea. This attraction is also known as the world’s lowest aerial tramway, which its lowest station positioned 257 meters below sea level and peak that is about 33 meters above. Opening of the Masada cableway in Israel took place in 1971. It was built specifically to deliver tourists to the eponymous archaeological complex located on a mountain top. Cable length is 900 meters, and the boost level is 290 meters respectively.

This cable car consists of four sections for a total length of 12.5 km (7.77 miles) reaching an altitude of 4765 meters (15,633 ft) (highest in the world). This altitude is higher than any point in Europe and USA excluding Alaska. Rides take an hour, and it’s so high that oxygen is made available in the cabins and at the top.

Bihar’s only ropeway is said to be the oldest in the country. It is a single-person ropeway that runs at the top of Ratnagiri Hill. It leads to the Vishwa Shanti Stupa, Makhdoom Kund and monasteries built by Japanese devotees of the Buddha on top of the Ratnagiri Hills.

Europe’s highest cable car opened in 1979 and links Zermatt with the Klein Matterhorn mountain. The “Little Matterhorn” is a solid rock peak next to the famous mountain with a shape that mimics its bigger brother and at 3883 meters (12,740 feet) the highest point in the Alps that can be reached by cable car.

The SkyRide starts at the base of the Grouse Mountain at about 300 meters (1000 feet) and climbs to 1100 meter (3700 feet) in 12 minutes. During the trip, you can see all of Vancouver, the Pacific Ocean, inlets and bays, and the Gulf Islands. It’s an exciting and informative ride, and you’ll feel like you’re on an exotic European vacation.