Top 10 Happiest Cities In The World 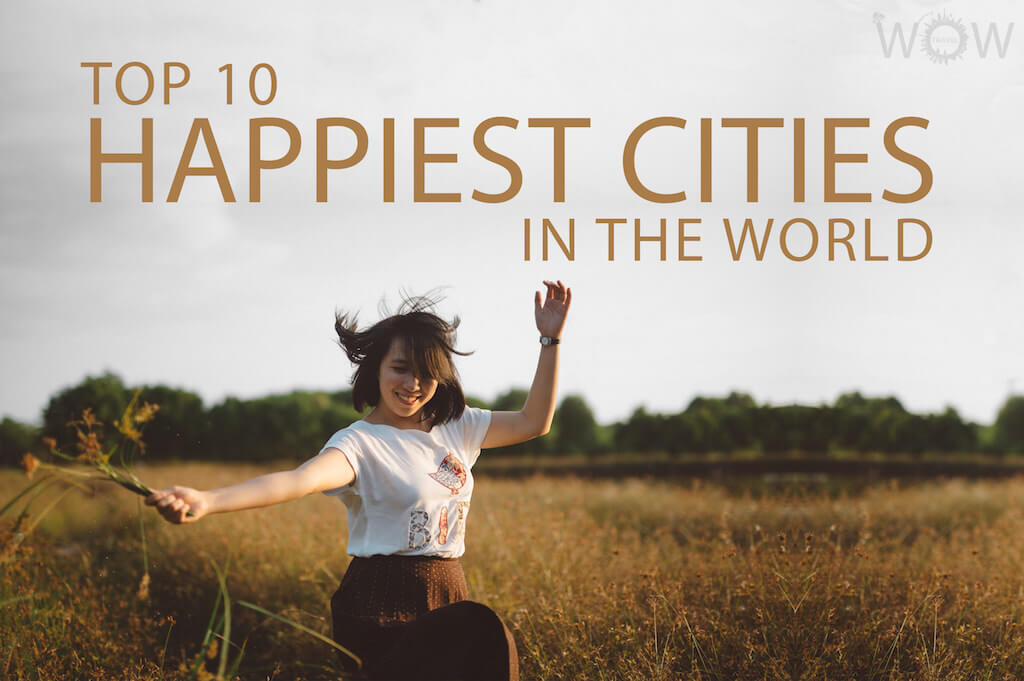 Looking for a city break to put a smile on your face? Take a look at the Top 10 Happiest Cities In The World. The list is based on a report that was released by the United Nations Sustainable Development Solutions Network. It includes data from 158 countries with regard to six factors: GDP per capita, absence of corruption, generosity, social support, freedom, and healthy life expectancy. The report surveyed up to 3,000 people in each country for over three years. Find out below which city is the happiest and where it is the happiest place in the world to live in.

If there is one city where everyone feels at home, that is Melbourne one of the happiest cities on earth. This beautiful metropolis is made up of people from all over the world, 38% of its population was born overseas. Victoria’s vibrant capital is a wonderful city that is often ranked amongst the world’s most livable each year. It is a city that offers great hotels, excellent and diverse gastronomy, shows and entertainment for all ages and tastes, it has the highest number of restaurants and cafes per capita than any other city in the globe. Great weather, friendly and smiley faces everywhere, delicious food and more await you in Melbourne. LGBT community is more than welcome here. Enjoy the best welcoming vibe at one of the Top 11 Gay Friendly Hotels in Melbourne.

New Zealand is a modern, secular, democratic society, with no ingrained class system and you can feel it everywhere. People’s will to live and to enjoy life is contagious and it may be due to the great weather they enjoy, Auckland has 265 days of sunshine per year. Auckland is considered to have one of the highest standards of living in the world, there is plenty of jobs and educational opportunities, as well as numerous leisure facilities. Aucklanders love sports such as rugby, cricket, hiking, kayaking, fishing, white-water rafting, football, basketball and skiing. Excellent hotels, amazing restaurants and gorgeous parks make this city the happiest place to live in New Zealand and definitely one of the happiest places on earth to live. Auckland is also a gay friendly city. Enjoy the best welcoming vibe at one of the Top 11 Gay Friendly Hotels in Auckland.

Iceland is a country that you definitely need to visit. Specially Reykjavík, the northernmost capital city in the world. It may be one of Europe’s smallest and most remote capitals, but it is a cosmopolitan city that offers a wealth of cultural, gastronomical and visual experiences and a throng of unforgettable activities. What’s better, the city is also gay friendly, proven by the top gay friendly hotels you can find here.

Copenhagen is a dynamic and trendy Scandinavian metropolis as well as the beautiful capital of Denmark. The city offers many art and history museums, world-class shopping, trendy neighborhoods and gourmet restaurants. For many, Denamark is the happiest place to live in the world.

Bergen, Norway’s second-largest city, is an international city full of history and tradition, a city with small-town charm and atmosphere. Surrounded by seven mountains, Bergen is ideal for enjoying the beauties of nature.

Vancouver is a seaport city located on the western side of Canada. This marvelous city truly is a melting pot, by far one of the most ethnically and linguistically diverse modern metropolis we have ever visited. It is, according to the statistics, the third most “livable place in the world” for its high standard of living and quality of life and the 10th cleanest city in the world. What are you waiting for? Book your stay at one of the best hotels in Vancouver today!

Located between Tallinn, Stockholm and St. Petersburg, on the north coast of the Gulf of Finland. Helsinki, the capital of Finland, is the country’s hub for business, research, education, culture, and government. It is a vibrant seaside city with green parks and open spaces, historical buildings with fine architecture and more than 300 beautiful islands interconnected by a maze of bridges. Helsinki might be the perfect summertime retreat and a great city for a weekend getaway. Planning to visit? Make sure to stay at one of the 11 Best Hotels in Helsinki.

Amsterdam, the capital of the Netherlands, is one of the greatest small cities in the world. Known as the “Venice of the North” for its 165 canals and 1,281 bridges. Amsterdam’s well-preserved and appealing 17th-century architecture provides a quaint if incongruous backdrop for a city famous for its modern, progressive, charming and cosmopolitan attitudes.

Stockholm is not just Sweden’s capital city but also its cultural, media, political, and economic center. It is built on 14 islands connected by 57 bridges and is on the central coast of eastern Sweden.

Switzerland is home to one of the world’s most thriving economies and also the happiest populations on the globe. Basel the third-largest city in Switzerland after Zurich and Geneva is located at the congruence of the Swiss, French and German borders. Basel, the world’s happiest city, is one of Switzerland’s underrated tourist destinations with a beautiful medieval old town center, a vibrant Carnival, world-class art museums and delicious restaurants. Planning to visit? Stay at one of the 11 Best Hotels in Basel.