Top 10 Things To Do In Bangkok 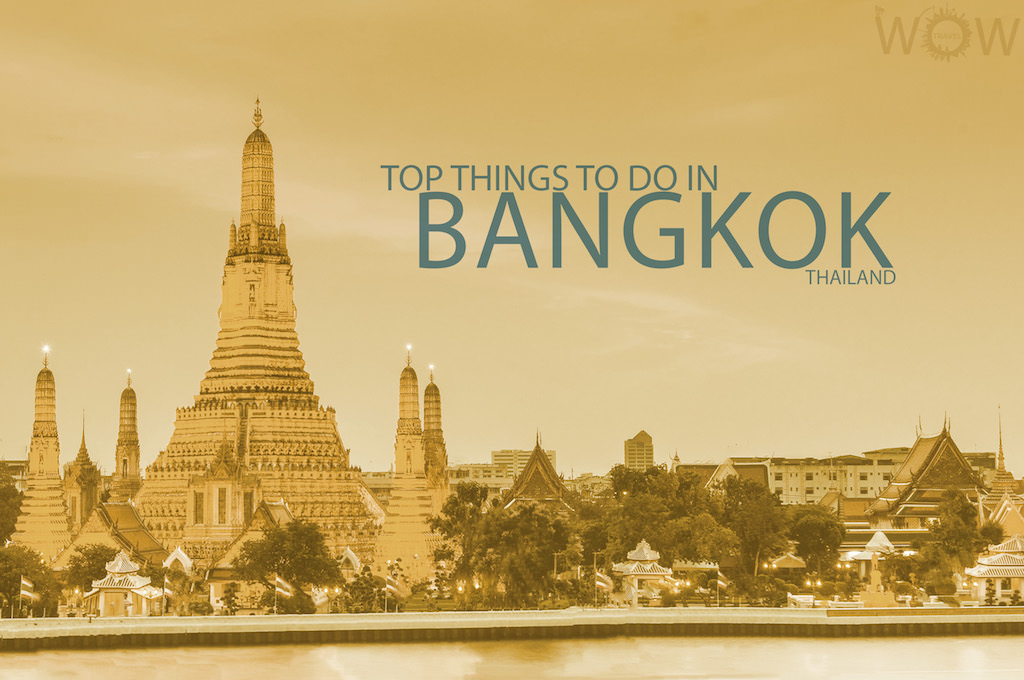 There are over 31000 Buddhist temples spread around Tfhailand and some of the most impressive are located in Bangkok, the capital city of Thailand and its political, social and economic center. These spectacular palaces and dazzling temples illustrate the glorious past of this great city. Their colorful street food stalls, a world-famous floating market and vibrant Chinatown, where you can buy clothes, accessories, shoes and souvenirs make of this city an unforgettable experience and a must on your travel agenda. Enjoy WOW Travel’s Top 10 Things To Do In Bangkok.

Khao San Road is a short street in central Bangkok Also known as the Backpacker’s center of Bangkok. It is a special place with a special spirit. With cheap accommodation, crazy nightlife, and a reputation for chaos and fun. The bars and clubs scene is definitely worth a trip to soak in the atmosphere of the area.

Chaophraya River was the origin of Thai civilization that passed down a long-lasting history well known to all until today. It flows through Bangkok and then into the Gulf of Thailand. This river of memory is the blood vessel that runs through the heart of the Thai Kingdom. The river reflects the long origin of Thai legacy and civilization. Today, the Chao Phraya is respected and known to be “The River of Reign.

Famed for its beautiful roofline, huge golden Buddha, magnificent frescoes and giant swing In front of the temple. Wat Suthat is one of the oldest and largest Buddhist temples in Bangkok. It is one of the six temples in Thailand of the highest grade of the first class Royal temples. This area is the home of the Brahmin priests who oversee royal rituals such as the ploughing ceremony held at the traditional beginning of the growing season. The mural paintings inside were created by craftsmen in the Third Reign (1824-1851).

Wat Arun – Temple of the Dawn

“The Wat Arun or the Temple of Dawn, is named after Aruna, the Indian God of Dawn. Sitting majestically on the Thonburi side of the Chao Phraya River, the legendary Wat Arun is one of the most striking riverside landmarks of Thailand. Despite the name, the most spectacular view of the glittering monument can be seen from the east side of the river at sunset, when the spires of Wat Arun make an impressive silhouette against the skyline. This Wat or Buddhist temple is an architectural representation of Mount Meru, the center of the world in Buddhist cosmology. In the mythology of Tibetan Buddhism, Mount Meru is a place that simultaneously represents the center of the universe and the single-pointedness of mind sought by adepts. Thousands of miles in height, Meru is located somewhere beyond the physical plane of reality, in a realm of perfection and transcendence. The four-corner prang of Wat Arun, which house images of the guardian gods of the four directions, reinforces this mystical symbolism.”

Bangkok’s Chinatown is the World’s most renowned street food destination, the local favorite dining district and one of the most amusing areas of the city. Every visit is an arousing overdose of all senses thanks to its narrow lanes, lack of traffic, charming old shophouses and active street side community. The constant throbbing energy of shopping paired with the steam of delicious food being prepared street side is an irresistible combination. Come and discover the sophisticated flavors of Bangkok’s 200 years old community that is rich with Thai-Chinese tradition & delicious food.

The Jim Thompson House is the home of James Thompson, a self-made American entrepreneur who was the founder of the world renowned Jim Thompson Thai Silk Company. Thompson’s achievements during his 25-year stay in the Kingdom of Thailand have won him much fame as the “Legendary American of Thailand”. Arriving in Bangkok at the end of World War II, Jim Thompson became passionately interested in Southeast Asian art and antiques. He purchased several old teak houses to create his own unique home in Bangkok in order to house his growing collection. The original Jim Thompson house and outbuildings were re-constructed from all or sections of six separate old houses that were brought from various parts of the country. After Jim Thompson’s mysterious disappearance in Malaysia in 1967, his nephew Henry B Thompson III generously donated the house and its collection to the people of Thailand. Little has changed in the home that was the ‘talk of the town’ and the ‘city’s most celebrated social center’. Even today, the charming Thai style house continues to be a key stop for visitors to Bangkok.

Located between Sukhumvit Soi 23 and Asoke Road, Soi Cowboy, also known as ‘the red light district of Bangkok’, is one of the best known designated entertainment nightlife districts in Bangkok. It is a short street, approximately 150 meters (492 ft) long, closed to traffic at night and caters mainly to tourists and expatriates with its famous go-go bars.

Wat Pho, famous for the huge Reclining Buddha statue it houses, is a Buddhist temple in Phra Nakhon district. It is the largest and the oldest Wat in Bangkok holds the dual honors of having both Thailand’s largest reclining Buddha image and the most number of Buddha images in Thailand.

This large and popular floating market is about 105 km (65 miles) southwest of Bangkok in Ratchaburi province. According to history around 1866, King Rama IV ordered that a 32 km long canal be dug at Damnoen Saduak. This canal would connect the Mae Klong River with the Tachine River. Nowadays, apart from providing transportation, Damnoen Saduak canal also provides local farmers with adequate water for agricultural purposes. A number of canals were dug to connect with it by local peasants to get water to splatter their land. As the excellent quality soil along the canal is very fertile, the area has a high potential for producing various kinds of fruits and vegetables such as the famous Malacca grape, Chinese grapefruit, mangoes, bananas, and coconut. The floating market includes many small boats with colorful fruits and vegetables, paddled by Thai women wearing bamboo hats. Including Damnoen Saduak, there are 15 Best Floating Markets of Bangkok.

“The Grand Palace was built in 1782 by King Rama I who established Bangkok as Thailand’s new capital… The result was a palace of jewels and gold and splendor like never seen before in Thailand. The Grand Palace remained the Royal Family’s official residence from 1782 to 1946.
Wat Pra Kaew was built to house the Emerald Buddha which was returned to Thailand after Thailand’s the capture of Vientiane in 1778. The Emerald Buddha is the most important representation of the Buddha in Thai Buddhism. To pray before the Emerald Buddha is to make merit, this is a place of worship and should be respected as such. You must dress appropriately before the guards will permit you to enter the Palace. Under no circumstances must you point your feet at the Emerald Buddha – to do so is sacrilege. If you can not cross your legs, avoid sitting down. If you do point your feet at the Buddha image, you could be ejected.” Source: discoverythailand.com