11 Most Visited Cities in Europe 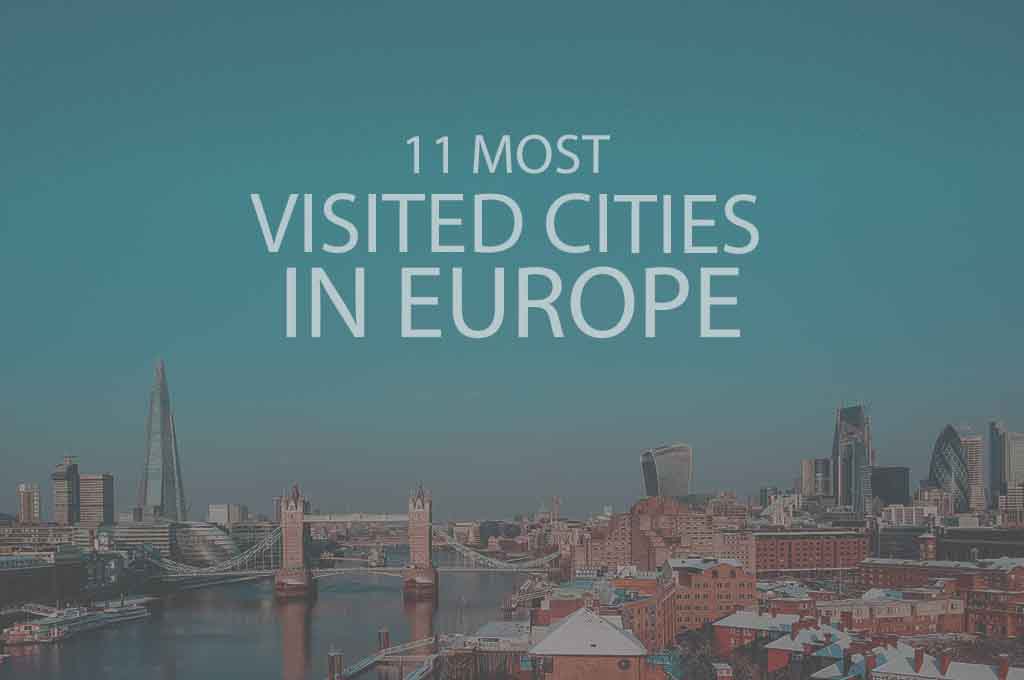 There’s simply no way to visit Europe and not be awestruck by its dazzling culinary and artistic diversity, natural beauty, and long and rich history. Right from the picture-perfect Mediterannean coast to the Alps and everything in between, Europe is magnificent. Vast, age-old cities with art, architecture, and sights, some of the world’s most exciting nightlife, and diverse cuisines make the continent as enthralling as destinations get. That’s why the most visited city in Europe by tourists isn’t just one – there are so many. In fact, Europe’s major cities attract millions of international visitors yearly, and the numbers only increase as the years go by. With 44 different countries with diverse cultures, languages, and peoples, it’s not a surprise, is it? To that end, here are the 11 options for the most visited city in Europe by tourists.

With 6.3 million annual visitors in 2019, the Greek capital of Athens is one of the most visited cities in Europe. One of the world’s most ancient cities, Athens is also the historical capital of Europe. What’s more, it’s considered the birthplace of arts, science, philosophy, democracy, and Western civilization. And, of course, it’s known for being home to one of the world’s most incredibly beautiful heritage sites, the Acropolis, and the spectacular Parthenon. Even culture lovers will have a ball exploring the city, which hosts one of the world’s best flea markets, the Monastiraki Flea Market. Finally, Athens is also an excellent base and jump-off point to explore famous Greece Islands such as Thessaloniki, Crete, and Mykonos.

Dublin, Ireland, is one of the most attractive options for the most visited city in Europe by tourists. In 2019, the city saw more than 6 million visitors and is a must-visit destination for travelers who love literature. For one, it’s home to the iconic Trinity College, the National Museum of Ireland, and the Little Museum of the Dublin Parliament.

What’s even better is that right outside the city limits, you’ll find rolling landscapes covered in lush, undulating flora and wildflowers. Besides the city, Dublin makes for a great base for exploring the Irish countryside’s lochs, castles, and valleys. So, don’t miss out on indulging in some of the best day trips from Dublin.

In fact, the city is recognized as “one of Europe’s most down-to-earth and friendly cities!” It’s no wonder the stunning Irish capital is one of the most beautiful places in all of Ireland.

Apart from this, the city is also full of green parks and a thriving drinking and eating scene. In fact, Milan’s history as an important European city goes back to Roman times, as it was the capital of the Western Roman Empire from 286 to 402 AD. Today, Milan is the epitome of modern urban advancement, excelling in tourism, fashion, entertainment, education, commerce, and art. And, of course, it’s famously home and hosts to the iconic and bedazzling Milan Fashion Week.

Vienna, the capital of Austria, is the most visited city in Europe by tourists and saw close to 6.6 million visitors in 2019. History is at the very heart of Vienna – figuratively and literally located in central Europe. The charming city is famously home to legendary figures such as Sigmund Freud, Beethoven, and Mozart. So, art, history, and culture vultures throng the cobblestone streets of this city with ardent enthusiasm. Austria‘s capital is also constantly called one of Europe’s most liveable cities due to the presence of stunning parks, cafes, restaurants, and sights and attractions. And, of course, the city’s mix of Baroque, Gothic, and Art Nouveau architecture makes it one of the most eye-catching cities in the world. Clearly, in the words of Billy Joel, “Vienna waits for you!”.

With 7 million annual visitors, it’s hard to keep Barcelona off the list of the most visited European cities. Words fall short when one expounds on the beauty of Barcelona. This scintillating Catalan capital finds its way onto most travel itineraries – for a good reason. After all, it’s home to a scenic beachfront, Gaudi’s iconic works of art, unique historic architecture, and a vibrant food scene. And who can forget the great Mediterranean weather and the cozy tapas bars that line the cobblestone streets? Barcelona has beautiful streets and is one of the world’s most bicycle-friendly cities. It’s equally enthralling for families, thanks to sights such as the Barcelona Zoo, one of the world’s most fascinating zoos.

What’s exciting is that besides the city itself, there are so many amazing sights to visit in the region, and Barcelona makes for the perfect base for these day trips. It’s no wonder that It’s one of the most visited cities in Spain, one of the world’s most visited countries!

With 8.8 million visitors in 2019, Amsterdam is the most visited city in Europe by tourists, despite being smaller in size than other European cities. This gorgeous destination is perhaps best known for De Wallen, one of the world’s most famous red-light districts that are now a tourist attraction. However, it’s also known for its intricate rings of canals and is famous for being one of the most beautiful canal cities in the world. What’s more, the city brims with tourist attractions, such as the stunning Van Gogh Museum, Anne Frank House, and more. Since the city is small, it does get quite crowded during summer. So, many tourists visit Amsterdam during the shoulder and off-seasons as well.

Additionally, its liberal social policies catapult it consistently to the list of the best places to live in all of Europe. It’s no surprise that Amsterdam is also considered one of the top happiest cities in the world.

It might sound cliched, but Prague really and truly feels like a “fairytale.” In fact, it’s one of the best-preserved of Europe’s medieval cities. That’s why nearly 9.2 million visitors thronged the streets of this magical city in 2019! The “City of a Hundred Spires” has withstood floods, fires, invasions, and many more travesties since as far back as 870 AD. This repute for perseverance and survival makes this Czech capital so fascinating.

Today, the statue-lined bridges, narrow cobblestoned streets, magnificent castles, and storied churches make it nothing less than an urban fairy tale. What’s more, it’s home to some stunning sights, such as Prague Castle, one of the world’s largest castles. There’s also the Dancing House, an amazing modern architectural wonder. It’s no surprise that even the most jaded of travelers will have trouble resisting the charms of this city.

We’re finally bringing you the heavyweights! The striking Italian capital of Rome is the most visited city in Europe by tourists. In fact, the city clocked almost 10.3 million visitors in 2019, and it’s not surprising, really. After all, all roads lead to Rome, one of the world’s first well-connected ancient cities. The city has been a major human settlement for almost three millennia and oozes that same vibe and history even today. Rome is home to some of the world’s most famous attractions, and boy, is that a long list.

For one, it’s home to two of the world’s most extraordinary churches, including St. Peter’s Basilica in Vatican City. St. Peter’s Square, where the cathedral sits, is one of Europe’s most beautiful squares. It’s also where the Vatican Museum, one of the world’s best museums, lies. There’s also the Trevi Fountain, one of the world’s most famous fountains. And who can forget the magnificent Colosseum? We told you it’s a long list, and we haven’t scratched the surface yet. If all that wasn’t enough, there are numerous options for day trips in Rome that’ll take you to the best sights in and around the city.

Rome is also famous for its decadent Italian cuisine and is perfect for a romantic getaway. Now, who wouldn’t want to visit here?

Byzantine, Constantinople, Istanbul – the scintillating Turkish city that’s seen it all. There’s no better place on earth to experience the “East meets West” vibe than in Istanbul, which saw 14.7 million visitors in 2019 – us among them! The unique European/Asian/Middle-Eastern flavor of this modern yet vintage city is irresistible and makes it one of the most culturally intriguing cities in Europe. The Bosphorous Strait cuts the city neatly into the European and Asian sides.

Moreover, the European side houses most of the architectural greats and marvels, such as the Hagia Sofia and Blue Mosque, one of the world’s most beautiful mosques. Most sights lie in and around the iconic Sultanahmet Square, which is also home to the Walled Obelisk Hippodrome, one of the world’s most amazing obelisks. Istanbul also hasn’t been able to let go of its original world hippie destination tag, and the vibe is evident in its streets and bazaars, such as Grand Bazaar. If you’re visiting this amazing city soon, we advise you to pack your best walking shoes for travel. That’s because much of the exploring is enjoyed walking around.

With 19.1 million visitors in 2019, it’s no surprise that the second spot on the list of most visited city in Europe by tourists lists is occupied by the French capital Paris. The City of Light, the City of Love, Paris has become known as the ultimate romantic getaway and one of the best luxury honeymoon destinations, and it’s easy to see why. Firstly, the list of sights in pairs is a long one. Think Eiffel Tower, the Louvre, and the Pompidou Centre Musée National d’Art Moderne, home to Europe’s largest contemporary art collection.

There’s also the spectacular Cathedral of Notre Dame de Paris, the Palace of Versailles, and the magnificent Arc de Triomphe. Plus, the serene waters of the Seine meander through the entire city. And, of course, there’s the great cuisine – croissants, coffee, eclairs, yum. Plus, you can devour them at the lovely little cafes on the cobblestoned streets that make Paris oh so, well, Paris.

Sitting at the top of the list of most visited European cities is jolly ol’ London! The UK capital on the River Thames saw close to 20 million international visitors in 2019. It might not look like it, but London has been one of the world’s most important cities for almost 2,000 years. It has influenced everything from finance and entertainment to education, commerce, and the arts globally.