11 Hippie Destinations Around The World 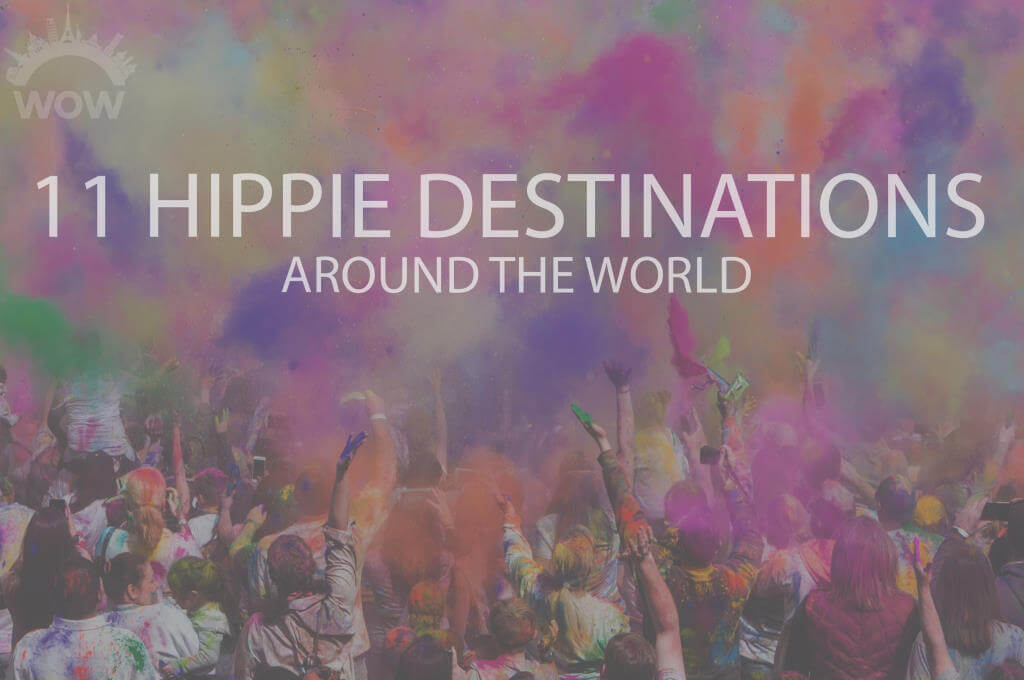 It was in the 1960s that the hippie culture made its way into the world. It was all about free souls who wandered around the world without any worldly attachments. And let us say, what an amazing thought and lifestyle it must be! Slowly and steadily, one wanderer met another, gradually forming a group that marked the beginnings of a new revolutionary era, The Hippie Revolution. It might have started in Africa, but hippie destinations sprung up in several parts of the world, including Spain, India, and many more countries. That’s how the hippie culture still exists and is so prevalent around the world, and that too in large numbers.

The 60s might be long gone, but the hippie culture has stuck around and still holds the same allure as it did back then. In fact, it’s nothing less than a religion, especially since this is the woke-as-hell 21st century. Do you want to embrace your inner hippie and go on a hippie hiatus? Here are the 11 most exciting and intriguing hippie destinations around the world, including some famous ones in India!

We begin this list of hippie destinations with a city in Africa, where the hippie movement is said to have originated. Behold Chefchaouen in northern Morocco, which could very well be one of the most beautiful cities in the world. Chefchaouen is Morocco’s Blue City; literally, the entire city is painted in different hues of blue – walls, doors, windows, et al! Later on, it gradually welcomed Jews and Christian converts as well. It’s no wonder it’s one of the Most Colorful Places On Earth.

Founded way back in 1471, the city’s origins were of a small Moorish fortress that saw exiled refugees from Spain. Today, it’s cheap, has a carefree spirit, and is full of open-air markets selling Boho stuff and handicraft products. Ding ding ding! Basically, it ticks all the boxes for being the perfect hippie destination, with the additional perk of not selling or hyping itself. Plus, you get to do nothing all day long happily! That sounds just perfect.

We can have no list of hippie destinations without including one of the OG hippie destinations in India, Goa. Goa might be a party hotspot today, but when it began its meteoric rise as a hippie destination, it was firmly off-the-beaten-path. The gorgeous sandy beaches, delectable seafood cuisine, and relaxed local culture with Portuguese influences, with the addition of delicious local alcohol, are what attracted chilled-out travelers. Even if you aren’t interested in nightlife, there are lots of Things To Do In Goa for the independent-minded traveler even today. Discovering Goa’s rich architectural past, especially its UNESCO-listed churches and the city of Old Goa, is one of the best things to do on Goa’s hippie trail today.

No list of hippie destinations in the world is complete without mentioning the king of them all, the party-central and psychedelic Ibiza. Part of Spain’s Balearic Islands in the Balearic Sea, Ibiza is a lot more than just partying and EDM music. Back in the ’60s, when the culture was just evolving, Ibiza was where raves began and is the go-to spot for all European hippies. Not only does it have lounges and clubs, but it also has wonderful shopping places and marketplaces. But, some say Ibiza’s bohemian culture goes back to the 1930s when Avante-Garde European artists who fled authoritarian regimes found peace and unleashed their creativity on this island. In fact, Ibiza of the 1960s is where adlib fashion was born. Today, the island is famous for its flea markets that sell everything from fashion, original costume jewelry, pottery, handicrafts, and even exotic musical instruments. Rad!

Byzantium to Constantinople to Istanbul, the world’s only city to sit on two continents, has long entranced and intrigued world travelers. The “Gateway to Asia” was one of the most important points on the original overland Hippie Trail that traversed Asia and Europe. Between the ’50s and the 70s, Istanbul in Turkey radiated an independent vibe, attracting romantics, artists, hedonists, and of course, hippies from all around the world. In fact, Istanbul was the fork in the road, from where the road split into the northern and southern routes through Asia. In fact, the melting pot of a Turkish city had, and even today has gathering spots for hippies, such as Yener’s Café and The Pudding Shop. Pilgrims driving Volkswagen vans or old cars would stop here to swap stories and share expenses with other travelers.

Negril, Jamaica, is one of the most localized hippie destinations in the world. After all, it’s a beach – and a long, long one at that! Also known as the Seven Mile Beach, it’s one of the Top Things To Do In Jamaica and is the original Jamaican hippie paradise. In fact, there was no main road connecting the then-rural backwater Negril to the rest of Jamaica until the 1970s there was. So, many adventurous travelers would arrive by local ferry, drop out, and get high. Some of these early pioneers even included Vietnam war vets who were looking for a permanent escape from the crazy world they’d left behind.

Slowly, bars, hotels, and guesthouses sprang up, and a road was built, cementing this place on the global hippie trail. If you find it over-commercialized in some places, walk along the beach. You’ll certainly find a spot where you can find some peace and quiet.

It might sound surprising, but the little town of Eugene in the heart of Oregon is one of the happiest and happiest towns in America. Neighboring Portland might be hipster, but Eugene is an out-and-out hippie! It’s the place to go for all your tie-dyeing requirements, not to mention herbal remedies and New Age philosophy. People here take out-of-the-box ideas of living seriously with eastern healing and communal living. What’s more, the city is home to a strong artistic community, whom you’ll hear talking about healing crystals and philosophy at the local dive bar. If that wasn’t enough, the city’s stunning natural setting is the perfect backdrop for embracing your inner hippie.

One of the most gorgeous hippie destinations is also one of the Breathtaking Places You Must See In Egypt, Dahab. The laidback resort town overlooks the clear waters of the Gulf of Aqaba. One of the top things to do here is diving in the clear waters all day long. Later on, you can share sheesha with your new friends and sleep under the stars in Bedouin tents. This makes Dahab the perfect place to sit back, unwind, and experience the hippie way of life. The golden sandy beaches boast incredible views of the Gulf of Aqaba, all the way to the Hijaz Mountains. What’s more, Dahab is one of the best places to snorkel and scuba dive. For, there are gorgeous marine life and corals right underneath the surface of the water.

When we mention hippie destinations in India, only one place comes to mind – Kasol! Located along the Parvati River, Kasol is like a slice of Israel in India. In fact, you’ll see fluttering Hebrew banners all along the river. The picturesque town has become a hub for backpackers and hikers who’re hiking Yanker, Sar, and Parbati Passes or Kheerganga. This hippie haven has many cafes where you’ll see backpackers and fellow hippies chilling out. These include Buddha Place, Jim Morrison Cafe, Freedom Cafe on the river, and Shiva Shanti Cafe, which is yet another hippie favorite. What’s more, you’ll even see small groups of travelers everywhere. They’ll be smoking sheesha and listening to music, absorbed in the natural beauty of the place.

Diving, snorkeling, kayaking; there’s a lot to do in Cape Maclear, one of the best hippie destinations in Malawi. This hippie town sees backpackers come from far and near to chill on hammocks and talk about life over a few drinks. This bucolic haven lies on the banks of Lake Malawi, the second deepest and third-largest lake in Africa. This lovely little backwater has still stayed pretty rustic, despite its solid popularity with backpackers from around the world. However, it’s developed wonderfully over the years with more facilities and restaurants than earlier, thus with something for everyone. The best bit? This African oasis sits right in the heart of Lake Malawi National Park, which is a UNESCO World Heritage Site!

Auroville, a.k.a. ‘The City of Dawn’ is a small town located on India’s Coromandel Coast and is one of the best hippie destinations in India. The idea behind this experimental township is a place of unity and where mankind can thrive. What’s more, the idea is for people to live peacefully without discrimination or borders and with spirituality. Auroville is one of the biggest melting pot cities in India, with hippies coming from far and wide and finding peace. The epicenter of this lush utopia is the golden-domed Matrimandir, which is surrounded by an area called a peace area. Silence is maintained within Matrimandir to help ensure the tranquility of space for whoever steps in there. It’s no wonder that Auroville is one of India’s most popular hippie destinations.

Topping the list of the world’s best hippie destinations is Ko Pha Ngan in Thailand. Sitting just above Ko Samui in the Gulf of Thailand, this small island is a classic stop on the eastern hippie trail. Sometime between 1983 and 1993, travelers began playing music on the pristine beaches during the full moon. As the years went by, this tradition is what is now known as the infamous Full Moon Parties! Think chemically-enhanced, day-glo, and hard-partying people in neon with buckets of beer. Today, Ko Pha Ngan is a hippie paradise and a beach retreat, with the epicenter at Hat Ri. This sunset-facing beach at the island’s southern tip is the nucleus of the international hippie scene that offers everything from spirituality and hedonism to tai chi and trance music.