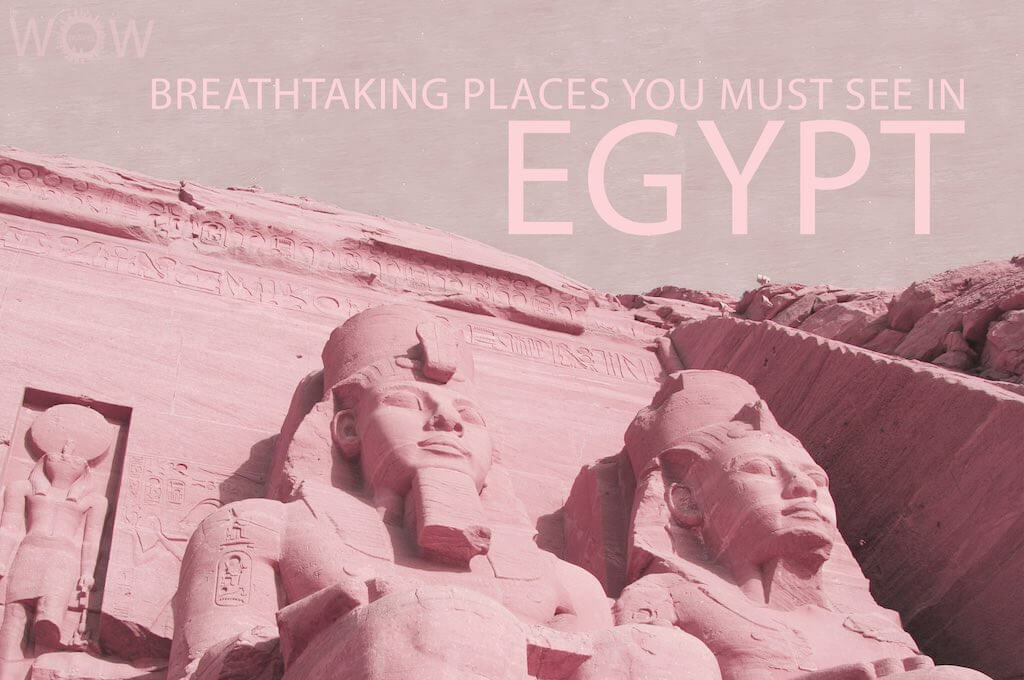 A country linking the North East of Africa with the Middle East, Egypt is usually known as the land of the Pharaohs. It has one of the longest histories of all times by a country, tracing its heritage back to the 6th-4th millennia BCE. This country is considered as the cradle of civilization and was the first to see some of the earliest developments of writing, agriculture, urbanization, organized religion and central government. Egypt is well known for its Millenia-old monuments, museums, its amazing coast and its oasis. Egypt has a lot of amazing things and places you ought to visit and see and here is a list of the 13 most amazing places you must see.

Normally when any tourist says he or she is going to Egypt, the first reason is to go visit the pyramids. As a matter of fact, poking above Cairo’s city skyline is the Great Pyramids and Sphinx of Giza. Normally there exists well over 120 pyramids in Egypt. These are the only remaining seven wonders of the world of the ancient world and are over 4600 years old. These features are so imposing and their coming into existence is still shrouded in mystery.

Valley of the Kings

You must have heard of the Pharaohs from the New Kingdom- Tutankhamun and Ramses II. They were both buried in the valley of the Kings on the west bank of Luxor which was discovered in 1922. These impressive tombs were constructed by the Kings of Ancient Egypt for a period of nearly 500 years in a valley opposite Thebes. Presently, 63 tombs and 23 chambers have been excavated in this valley making it one of the most archaeological sites in the world. The most famous of all these tombs is that of King Tutankhamen.

This is one of those hard to reach historical sites in Egypt. To get to this site, you can either take a plane from Aswan which might take about an hour or take the bus or taxi which might last three to four hours. It was built by Ramses II as a visual sign of his authority over the Nubians and even after 3250 years later, it still stands as an amazing site. Right next to it is a small and lesser temple known as Nefertari. Though rustic inside, simple murals and reliefs telling of Ramesses battles can still be found. The whole site was relocated by the UNESCO between 1964 and 1968.

There are several temples in Egypt but this is the single most intact temple in all of Egypt. It is often said that this is probably the site where the last hydrographs were ever written. This temple is dedicated to the goddess of Isis and is located on a small island just a few kilometers in front of the grand Aswan High Dam. The Temple was relocated 300 meters away from the dam so as to rescue it from the floods after the dam was finished. Philae appears to be the image of Elysium and is considered as one of the most beautiful places in Egypt. Philae looks amazing at night so if you are looking for some things to do in Egypt at night, this will be one of your best options.

It is said that Pharaoh Djoser built the first true step pyramid in history around the 27th century BC. The ancient monument is surrounded by a huge burial complex and smaller pyramids and tombs. Moving along the roofed colonnade corridor, some of the stone looks like were hewn from their queries 10 years ago instead of almost 5000.

This is a laid back resort town located on the South East coast of the Sinai Peninsula. Dahab attracts travelers who want to stay in a peaceful location in Egypt that is not packed with so many tourists. Dahab is loved for its incredible natural beauty and it is one of the most beautiful resorts in Egypt. The golden sandy beaches with incredible ocean views stretch across the Gulf to Saudi Arabia’s Hijaz Mountains. Under the water are corals and marine fauna which makes Dahab one of the best locations for scuba diving and snorkeling on the peninsula. The famous blue hole which is a gaping sinkhole carved into the reef is located here in Dahab. Interested in sinkholes? Read our Top 6 Most Amazing Sinkholes in the world!

One of the oldest monasteries in the world (Built between 548 and 565), St. Catherine stands at the foot of Mount Sinai, where Moses is said to have received the Ten Commandments for the Jewish people. The site contains the world’s oldest continually operating library, possessing many unique books including the Syriac Sinaiticus. The famous Mount Sinai has been mentioned several times in the book of Exodus, the Bible and the Quran. It has a huge religious significance and many tourists chose to hike this holy mountain through the night or stay in a lodge to wake early and watch a sunrise of biblical proportions.

Lying beyond the valley of the kings is the most impressive mortuary temple ever built in ancient Egypt. This temple was dedicated to the female Pharao Hatchepsut. It is said that a tunnel connects both the Valley of the Kings and the temple itself. The vistas from the entrance are just too picture perfect and there are some famous murals to be seen inside.

Just below the Gulf of Suez is a stunning resort town located on the northeast coast of Egypt. Often described as the Hurghada Riviera, it stretches for 40 miles along the Red Sea Coast and is home to many luxurious resorts. Originally a fishing town, Hurghada has grown quickly over the past few decades to become a touristic hotspot. It contains many restaurants, touristic attractions and accommodation options to chose from in the region. Some of the luxurious resorts found here are the Makadi Bay, Sahl Hasheesh and El Gouna which makes it the perfect location if you want to be pampered. There are so many pristine beaches to explore with bright white sand and crystal-clear water. The coastline is made up of coral reefs making Hurghada one of the most popular locations for diving and snorkeling in Egypt. Make sure to visit the Careless Reef, Giftun Islands and Omo Gamaar. You can also swim with the dolphins off the coast of the Aden Beach Resort. You can always take a submarine tour or go for sightseeing at the Hurghada Grand Aquarium and Shaab Abu Ramada Aquarium.

Below the Red Sea’s surface is another world as fascinating as the temples and tombs on land. Among the many coral reefs off the coast, there’s also a glut of shipwrecks that have sunk in the Red Sea’s Gulf of Gubal and Gulf of Aqaba. Of all the wrecks, the most famous is the Thistlegorm, an English WWII cargo ship that was on its way to resupply British troops when it was bombed by the Germans in 1941. Today the site is regarded by divers as one of the top five wreck dives in the world due to the vast cargo of cars, motorbikes, and WWII memorabilia that can be seen both scattered on the sea bed around the wreck and inside the ship itself. Dive boat trips to the wreck are organized from both Sharm El Sheikh and Hurghada. Planning to visit? Consider staying at one of the 11 Best Hotels In Sharm El Sheikh.

Hathor was the goddess of love, motherhood, but also music, dance, and fertility. In Dendara a whole temple complex was dedicated to worshiping her and it’s one of the best-preserved temples in Egypt. While it looks a lot like other temples from the Ptolemaic period, it is unique for two reasons. There is a staircase leading to the roof of the temple. Once a year an important festival was celebrated here. The staircase is lined by a quite precise depiction of the procession involved in the festival, while the structures on the top surprise with their quite graphic themes. Secondly, Dendera is home to a couple of important murals depicting the zodiac signs and one of the earliest renditions of the zodiacs.

Far away from Egypt’s modern societies, an ancient community lies in the heart of the Western Desert (50 km east of the Libyan borders), preserving not only its virgin, natural beauty, but a rich human experience as well. Within this little paradise, considered the easternmost extension to the Berber descendants (the original inhabitants of North Africa), tribes of the oasis have managed to retain their Siwi language, in addition to much of the Amazigh culture. Read more about it here – 5 Common Misconceptions About Egypt’s Siwa Oasis.

28 miles North of the town of Farafra is the fabled white desert of Egypt. The desert has an otherworldly beauty with bizarre, ghost-white rock formations sprouting from the desert sands. The strange structures are actually huge chalk formations created as a result of occasional sandstorms in the area. Take a four-wheel-drive through the desert or stay overnight for a truly surreal experience.