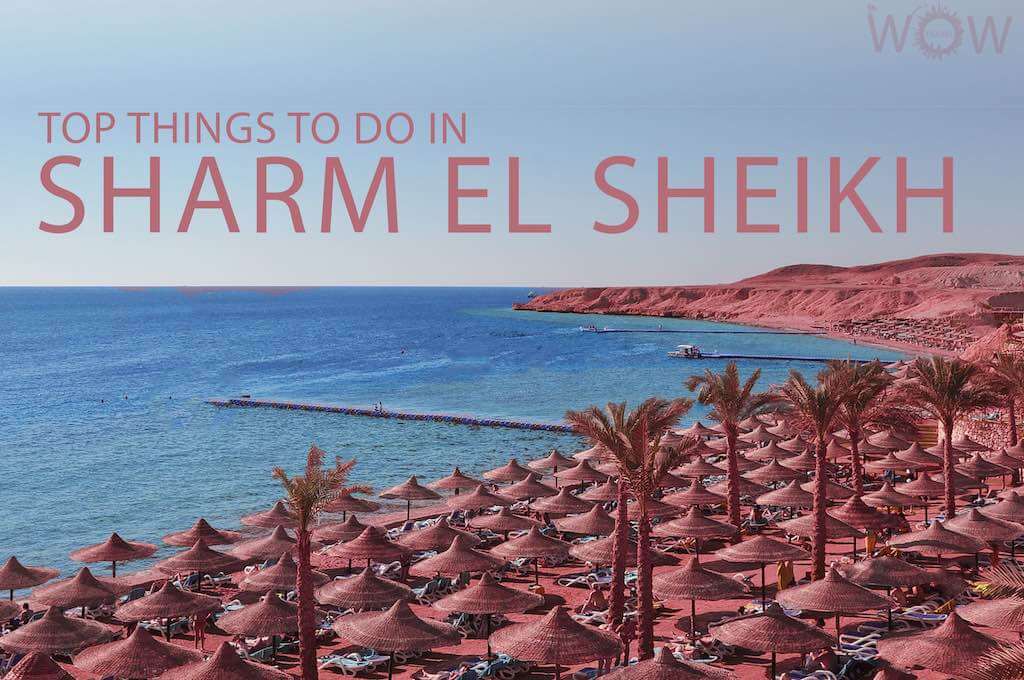 Situated on the southern tip of the Sinai Peninsula in Egypt, Sharm El Sheikh is where you can enjoy year-round sunshine, inclusive hotels, beautiful beaches and some of the best scuba diving sites in the world. This historical city is famous around the world because of the variety and abundance of corals and marine life under the water in the area.  From Diving, snorkeling, windsurfing, and camel-riding to shopping and delicious Mediterranean cuisine, Sharm El Sheikh has it all. Here’s a breakdown of the top 11 things to do in Sharm El Sheikh.

Naama Bay is widely considered to be an exceptional tourist attraction in Sharm El Sheikh. The public beach doesn’t just boast of turquoise waters but also features cabana rentals and covered seats to help you cool off after taking a swim. As a visitor in Naama Bay, you are spoilt for options. You can choose from the multiple jet skis, paddle boats, and snorkeling gear to showcase your diverse watersports skills. A trip to Naama Bay isn’t complete without sampling tantalizing cuisine prepared by seasoned chefs. Whether you are interested in the Mediterranean, local or seafood dishes, the Naama Bay got you covered courtesy of the various restaurants available.

Located 38 kilometers south of Sharm el-Sheikh, Ras Mohammed National Park, A UNESCO World Heritage Site, has stunning coral-reef ecosystem featuring over 1000 species of fish including whale sharks, mantra rays and hammerheads. Go diving at the Jolanda Reef, it is one of the most popular dive sites in the northern section of the Red Sea.

Participating in a quad bike race should get your adrenaline flowing and reinvigorate your vacation. The quad bike race allows you to witness Egypt’s desert at its best during sunset or sunrise. As the sands whip past your skin, you can feel the adrenalin rush kicking in as you race through the desert sand in your four-wheel bike. A stop for tea in a traditional Bedouin tent serves as the perfect end to quench your thirst and try some Egyptian delicacies after an exhilarating race.

To understand Sharm El Sheikh’s rich history, be prepared to visit the Old Town to mingle with the friendly locals and learn a thing or two about the place. The Old Town Market is recognized by a pair of enormous pillars at its entrance. Make sure to visit during the night to shop from the diverse stalls and vendors, from hats, clothes, and paintings to delicious local cuisine and Mediterranean dishes.

El Sahaba mosque is 35 meters high and can host around 3,000 worshipers. The mosque has two minarets that are 70-meter high, which makes it the second biggest in Sharm El Sheikh. It comes fully-self-sufficient with its own solar power station and with a total cost of roughly 31 million EGP.

The Coptic Orthodox Church wields a formidable reputation for attracting millions of tourists in Sharm El Sheikh annually. The towering landmark features two large bell towers with extended stained glass windows and an embellished entrance. The church’s interior depicts religious artworks and murals depicting prominent scenes from the Bible. As a visitor, the crucial artworks and murals offer you a deep insight into the Church’s ancient history and existence. Such information builds up your knowledge as you traverse various destinations in Sharm El Sheikh.

Away from the enchanting wildlife and nightlife destinations in Sharm El Sheikh, the St Catherine Monastery offers a unique experience of its own. Despite being two hours from Sharm El Sheikh, the monumental construction is a spectacle to behold courtesy of its rich history. As a visitor, you can obtain an informative guide regarding the building’s unique architectural design and incorporate it into your construction projects.

The Sharks Bay area forms a beautiful cove, ringed by hotels (including some of the 11 Best Hotels In Sharm El Sheikh), bars and restaurants. It is the perfect location for divers and snorkellers, located as it is opposite stunning Tiran Island. Trendy restaurants and shopping malls abound at Soho Square for when you’re not in the water, under or alongside it.

A visit to Tiran Island offers you an alternative fun experience away from the desert lifestyle. You can take a boat trip from Sharm El Sheikh to Tiran Island to not only relax on the sandy beaches but also snorkel in the azure and encounter a variety of marine life.

Located at the northern end of Naama Bay, the Gardens is a group of three different snorkeling and diving sites called Near Garden, Middle Garden, and Far Garden. We highly recommend you to visit the Far garden. It is a fringing reef which drops to 25 meters and is scattered with small pinnacles swirling with glassfish.

If you are planning an unforgettable sightseeing experience in Sharm El Sheikh, then the Al-Mustafa Mosque should be in your bucket list. Its striking architecture makes this worship sanctuary a worthwhile location not just to worshippers but to tourists as well. With an extraordinary dome and stunning marble, you can experience an unrivaled serenity meditating or appreciating the profound Islamic teachings.