Top 6 Most Amazing Sinkholes On Earth 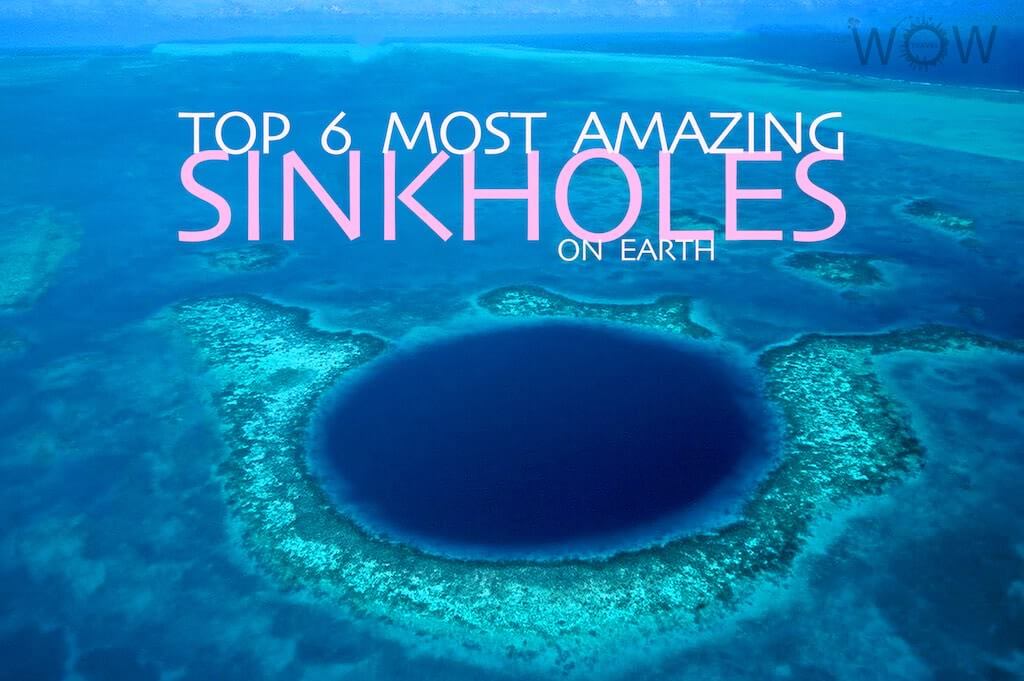 Nature never stops to amaze us with its fascinating phenomenon just like these sinkholes, terrifying massive holes that open up in the Earth without warning. As well as being very dangerous, sinkholes are also a very dramatic geological feature and in most cases they are beautiful. WOW Travel offers you a unique list of the Top 6 Most Amazing Sinkholes On Earth.

The Heavenly Pit sinkhole in China is located in Xiaozhai. It is a double nested sinkhole that measures 662 meters (2171 ft) deep, 626 meters (2053 ft) long and 537 meters (1761 ft) wide. The sinkhole certainly occurred over the last 128,000 years. It is arguable the largest sinkhole in the world. It is so big that it is now the site of extreme adventurers who want to go on a BASE jumping trip.

It is believed there are over 3,000 sinkholes surrounding the Dead Sea. Hundreds of sinkholes are forming each year around the drying Dead Sea that could face being completely parched by 2050. Its basin shrinks by a meter per year due to severe water mismanagement. These sinkholes are a direct result of the inappropriate mismanagement of water resources in the region.

The Great Blue Hole is a large underwater sinkhole off the coast of Belize. It lies near the center of Lighthouse Reef, a small atoll 100 km (62 miles) from the mainland of Belize City. The hole is circular in shape, over 300 meters (984 ft) across and 125 meteres (410 ft) deep. The world’s largest natural formation of its kind, the Great Blue Hole is part of the larger Barrier Reef Reserve System, a UNESCO World Heritage Site.

In 2010 a giant sinkhole in Guatemala City swallowed a three-story factory and killed 15. It occurred for a combination of reasons, including Tropical Storm Agatha, the Pacaya Volcano eruption and because human activity — A burst sewer pipe probably created the underground cavity, which is 18 meters (60 ft) wide and 91 meters (300 ft) deep.

This sinkhole is located in the town of Dibab in Oman and it is 30 meters (98 ft) deep. It features a concrete stair way to take visitors down to the lake.

Some of the oldest and most unique sinkholes in the world. Both sinkholes have formed in extremely resistant sandstone over the course of hundreds of millions of years. Bottom of sinkholes contains patches of unique rainforest with endemic, little explored species.