Top 8 Things To Do In Mecca 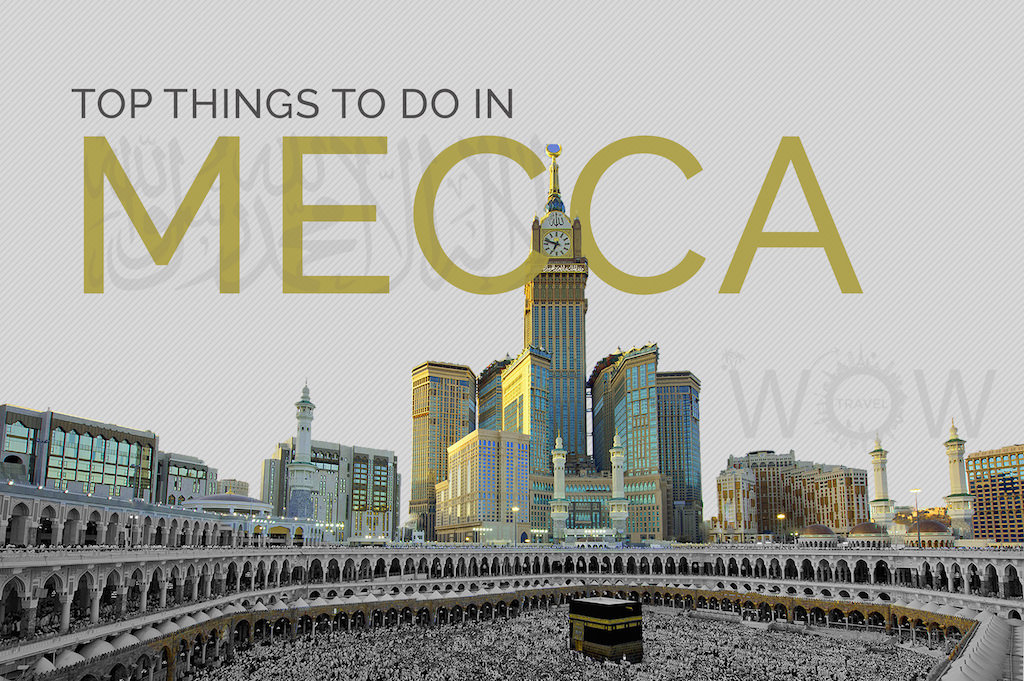 At a height of 277 meters above sea level, in a narrow valley lies the city of Mecca. The holiest city in the world for 1.23 billion people or 23% of the world’s population as designated by the prophet Muhammad as well as the direction in which all Muslims should offer their prayers 5 times a day, no matter where they are on earth.  Although most tourism in Saudi Arabia still largely involves religious pilgrimages, there is growth in the leisure tourism sector, approximately 3 million people visit Mecca annually. This city offers its visitors everything they need, 5-star hotels and excellent restaurant chains from all over the world from the Indian, American, Middle Eastern to Southeast Asian food. However, no type of pork nor Alcohol is served in Saudi Arabia as it is forbidden by the Qur’an and therefore under Islamic Law (which Saudi Arabia follows).

We invite you to take a look at WOW Travel’s Top 8 Things To Do In Mecca. Mecca is not your average tourist destination but it is a fascinating place to explore and visit.

“Every year about 2 million Muslims travel to Al-Masjid Al-Haram, Islam’s most sacred mosque, in Mecca, Saudi Arabia, where they perform a number of spiritual rites, in a process known as the Hajj. Performing the Hajj, is one of the five pillars of Islam, and all able-bodied Muslims should go at least once in their lives if they can afford it. Umrah, which is known as the ‘lesser pilgrimage’, is a journey to Mecca (Makkah) at any time in the year. The pilgrimage lasts for six days. It occurs during Dhu Al-Hijjah, the 12th month in the Muslim calendar. This year, the Hajj is expected to fall on October 1-6, but it is difficult to know in advance as it is based on lunar cycles. Mecca is thought to be the place where Ishmael and his mother Hagar were provided with a spring of water in the desert. As it is the most sacred place in Islam, non-Muslims are forbidden from entering.” Source: ChristianToday

It is located in the center of the Grand Mosque in Mecca and revered by Muslims all over the world. This black stone was set as it is into the Kaaba’s wall by Muhammad in the year 605 A.D. When pilgrims circle the Kaaba as a part of the tawaf ritual during the hajj and many stop and kiss it just like Muhammad kissed it according to tradition. For Muslims it’s obviously the number one in the list of things to do in Mecca.

Also known as the Fairmont Makkah Clock Royal Tower, it is a five-star hotel located next to the Masjid Al Haram with a prime location as the closest hotel to Kaaba and the best for Umrah and Hajj. We must say that it is one of the world’s tallest buildings with 120 floors and 1542 guest rooms suites and Residences, nine state-of-the-art restaurants, 56 elevators that allow easy access to and from Al Masjid Al Haram and more. This sumptuous hotel combines lavish design with the warm tradition of genuine Arab hospitality.

This very popular spot if what Muslims know as “The Mountain of Light” or “Hill of Illumination”. This hill houses a cave which has tremendous importance in Islam because it is where prophet Muhammad spent a great deal of time meditating and it is believed that he received his first revelation from God by the archangel Gabriel inside this cave.

It is a mosque, 10 minutes from Mecca,  with amazing facilities for baths, ablution and changing, available for pilgrims and those who visit to pray. It is used by local Muslims as Miqat (a station for putting on pilgrims’ garments). If someone is living in Mecca and wants to perform Umra (pilgrimage to Mecca) they visit this mosque in order to enter into the state of Ihram before returning to Mecca.

In a few words, Mina is famous for being the “city” that hosts millions of people during the annual Hajj pilgrimage. This artificial neighborhood is made up of 100,000 air-conditioned tents coated with teflon in order to stand temperatures of up to 700 degrees Celsius to provide a comfortable temporary home to pilgrims from all over the world. At Mina, men and women are not allowed to sleep together.

It is a shopping center dedicated to creating a vibrant and unique upscale shopping, dining and entertainment environment for the whole family. It is considered by Saudis and visitors as the most complete and most important shopping center in Mecca. It offers a broad diversity of local and international brands, supermarkets, restaurants and many other facilities to enjoy an ultimate shopping and leisure experience designed to satisfy all customers. It’s definitely in the list of the best things to do in Mecca.

“Hike the Al Wahba Crater northeast of the city of Mecca. Situated in the desert, this massive crater measures nearly 1 mile across with 850-foot cliff faces stretching to the bottom of the pit. The crater bottom fills with water in the wet season and turns into a salt-pan in the summer as the sun evaporates the moisture. This area once saw large amounts of volcanic activity, and the sandy plains surrounding the crater consist mostly of volcanic ash. Trek up the side of the crater to the top. Palm trees grow along the northern cliff face, providing shade for tired hikers. Camping is permitted around the crater, but you should hire a guide if you plan on spending the night.” Source: Trails.com