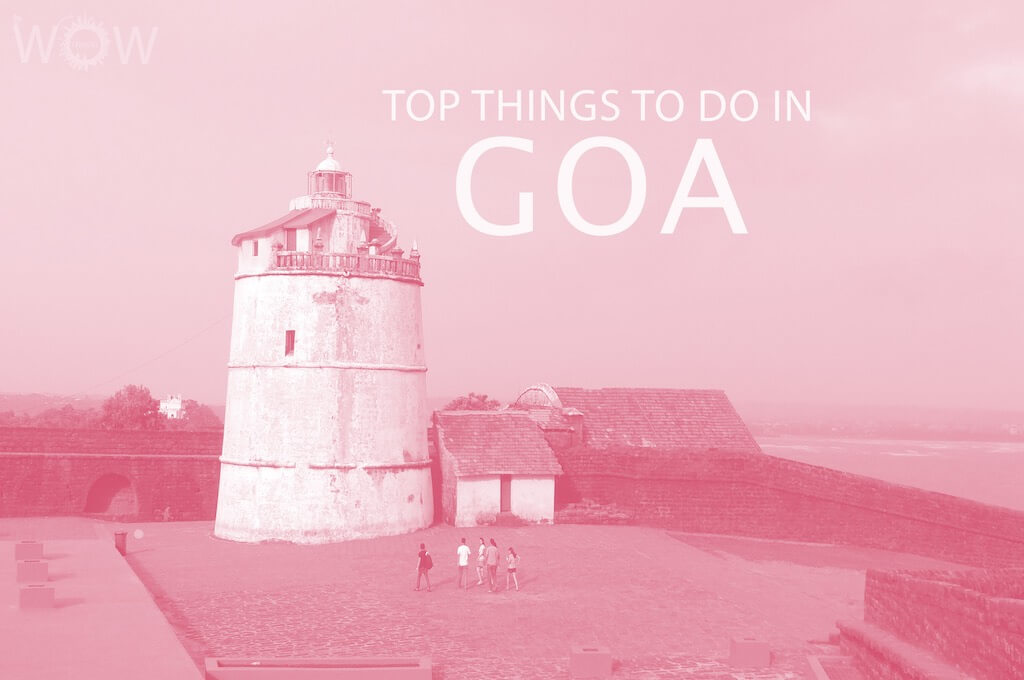 India‘s smallest state, Goa, packs quite a punch when it comes to hospitality and vacationing. With more than 100km of beach stretching across the state and a party vibe that’s unparalleled to the rest of the country, Goa is where India heads to bring in the New Year. Located on the southwest coast of India, the tiny state is synonymous with good food, beautiful beaches, and some stunning architecture left over from its Portuguese past. The Portuguese overseas territory was only annexed by India in 1961, after being under Portugal‘s control for about 450 years. The Portuguese influence is still quite evident in the architecture, culture, and food in the state. Goa is divided into two districts North and South Goa which have their own distinct personalities. North Goa is where all the action takes place with its crowded beaches, legendary nightlife, reiki and yoga retreats. South Goa, on the other hand, is much quieter, holding onto its traditions while opening its doors ever so slightly to fast-paced modernization. There is no dearth of things to do or places to eat at in Goa. It’s a foodie paradise, and one is really spoilt for choice with a large number of restaurants serving every type of cuisine at every nook and corner.
Booking.com

The old city of Velha Goa is located in the north, about 10kms away from the capital Panaji (Panjim). Once the bustling capital of Portuguese India, Velha had a meteoric rise until the 17th century, when outbreaks of cholera and malaria forced the abandonment of the city. It had such a glorious past that it was once referred to as the ‘Rome of the East.’ Today this past glory is reflected in its imposing cathedrals and churches which are still quite well preserved. There are about 8 churches scattered throughout this part of Goa that date back to its colonial era, with the more prominent ones like the Se Cathedral and the Basilica of Bom Jesus located within walking distance from each other. The Archaeological Museum of Goa is also located in Velha.

One of the most famous churches among Roman Catholics is the Basilica of Bom Jesus which contains the remains of St. Francis Xavier. The ‘incorrupt body’ of the saint is in a glass-sided coffin in the mausoleum where it was installed in 1698 after having been moved into the church in 1622. An exposition of the body is held every 10 years and pilgrims from all over the country and the world flock to Goa to be a part of this event. The church itself is a UNESCO World Heritage Site and the first minor basilica in India which is still actively used. It also features in the list of the Seven Wonders of Portuguese Origin in the World, alongside other prominent monuments from China, Brazil, and Santiago. Construction on the baroque church began in 1594 and the church was consecrated in 1605. The interiors of the church are quite simple but the huge gilded ornamental screen behind the altar stands out. The church also holds the distinction of being the only church in the area with no plaster. Its plaster was removed in 1950 by a Portuguese conservationist who was under the misguided notion that the laterite stone which makes up the basilica would become stronger when exposed to the elements. The church is still actively in use with a mass being held every day of the week in English and Konkani.

With an expansive area of 4,180 sq meters, the Se Cathedral in Old Goa is said to be the largest church in Asia. The cathedral which is the seat of the Patriarch of the East Indies was built to commemorate the victory of the Portuguese over a Muslim army in 1510, which led to the capture of Goa. Work on the church began in 1562 and was completed in 1619. The Portugues-Manueline style cathedral is rather plain on the inside with four chapels on either side of the nave; the Chapel of the Cross of Miracles is one of the most visited because of the legend associated with its miraculous cross. One of the cathedral’s two towers collapsed in 1776, after being struck by lightning and was never rebuilt. The famous Golden Bell, known for its rich tone and its rather heinous past is housed in the remaining tower. During the Inquisition, it rang out during the infamous trials of faith that were conducted in the market square in front of the cathedral. Just west of the cathedral is the huge Church of St Francis of Assisi which is no longer in use but worth visiting for its neglected but beautiful interior.

Anjuna, located in the north was the veritable ‘hippies paradise’ in the 1960s and has continued to hold onto its ‘bad boy’ image of sorts. Renowned for its trance parties and hippie lifestyle, the essence of its past can still be felt at the flea market which is held during the day on Wednesdays, and at night on Saturdays. Initially started by hippies, the market has undergone a huge transformation since then, although you’ll still come across the occasional Westerner trying to get rid of some stuff before leaving the country, or selling some skill to fund his extended stay. There is a huge variety of things on sale, from Kashmiri and Tibetan traders to Rajasthani art and colorful teeshirts. It’s a good place to pick up a souvenir or just hang out with a chilled beer. Anjuna Beach is just a walk away so if the haggling gets to you, you know where to retreat.

The capital of Goa is an interesting blend of the modern with the traditional, where the old Latin quarter of Fontainhas and San Tome vie for space with new modern buildings. Fontainhas which was founded in the late 18th century is where the Portuguese mark on the city is most evident, with colorful colonial houses and restored mansions lining the narrow street. The houses are painted every year after the monsoons, true to a Portuguese edict that mandated this. Also of note is the beautiful 17th century Church of Our Lady of the Immaculate Conception which overlooks the town. Panaji looks out on the Mandovi River where one can enjoy dinner on the many cruise boats plying its waters or have a night out at one of the floating casinos.

Goa’s most northerly beach is Arambol renowned for its alternative therapies, yoga, and meditation. Its location far away from the regular tourist crowd makes it a sought after destination for long term travelers looking for a little peace and quiet. Although it can get a little crowded and dirty at times, there are secluded spots that have not yet been discovered by the tourists. The highlight of a trip here is the sweet water lake which connects to the sea. Also in the north is another relatively quiet beach, Vagator Beach, north of Anjuna. The beach is divided into Big Vagator which is the crowded stretch, and Little Vagator the quieter stretch which is more popular with foreign tourists. Little Vagator is renowned for psytrance with Hill Top being the most popular destination for trance lovers. However, if you’re looking for everything that you’ve heard about the Goa beach scene, then head to Baga which is a little ahead of the ever so crowded Calangute beach. There’s plenty to keep you busy at the beach with watersports, great food, and drinks. The nightlife at Baga is also quite legendary and extremely popular with Indian tourists. Other popular beaches in the north are Candolim, Ashvem, and Morjorim.

Fort Aguada, built in 1612, is a huge Portuguese fort that occupies the entire peninsula at the southwestern tip of Bardez. Strategically located on the mouth of the Mandovi River, the fort was one of the most successful bastions of the Portuguese as it had never been conquered. Its name is derived from ‘water’ which was found in abundance in and around its surroundings, therefore making it an important watering point for ships arriving from Portugal. A four-storeyed lighthouse stands on the bastion on the hilltop which is a popular spot for catching a brilliant sunset. The sea level walls of the fort at Sinquerim beach are also accessible along the road past the Taj Hotel.

These 17th-century houses which stretch along one side of Chandor’s village square in South Goa are fine examples of what the grand Portuguese mansions were like. The sheer size of the Braganza house is quite overwhelming and gives one a peek into the lifestyles of the gentry under the Portuguese. Built on land granted by the King of Portugal, the enormous house was later divided into the East Wing and West Wing when it was inherited by two sisters from the family. The West Wing which is owned by the Braganza Menezes family has undergone a major overhaul and resembles a museum with its chandeliers, Italian marble floors, and antiques from around the world. The East Wing is not as beautiful as the other side but also has a notable collection of antiques and collectibles. Also in the area is the over 500-year-old Fernandes house, notable for its secret basement hideaway and escape tunnel.

Although South Goa has some of the best beaches in the entire state, it has remained relatively quieter than the north largely due to the reluctance of the locals to give up their traditional way of life. The party scene is scattered and more muted than the north and there are fewer clubs and bars, but for those seeking an active nightlife, there are quite a few options at Colva Beach. For those interested in the culture and history of the region, the main city, Margao, has quite a few architectural wonders that date back to the Portuguese era like the Secretariat Building and the Church of the Holy Spirit. The south also has the distinction of having most of the top-end hotels in Goa, located near Cavelossim, Varca and Mobor beaches.

Palolem Beach was once Goa’s best-kept secret but has since become one of the liveliest and most happening beaches in the south. This picture-perfect beach with its crescent of golden sand and fringe of palm trees, located about 43km from Margao, attracts all kinds of visitors, from long term travelers to package tourists. The best part of the beach is the perceptible change in the vibe from one end to the other, with the north end being quieter and more family-friendly. If you’re looking for something fun to do on a Saturday night head to Silent Noise a stone’s throw away from the beach. This interesting club allows you to dance the night away under the stars without disturbing the serenity of the surroundings, by listening to music on a set of headphones handed to you during entry.

The lure of spices like cloves, cardamom, and black pepper is what brought the Portuguese and other explorers to the Indian shores, especially to the southern part of India. There are quite a few spice farms in Ponda where one can inhale or taste the aromatic spices that are grown. One of the more famous farms is the Sahakari Spice Farm which covers an extensive 130 acres of land. A visit to the spice farm is an interesting day trip which includes a Goan lunch and Goa’s famous alcoholic drink ‘Feni.’

Goa’s impressive waterfall is the second-highest in the country after the Jog Falls in Karnataka. Its name literally translates as ‘Sea of Milk’ and one of the best times to view this spectacular scene is just after the monsoons in the month of October. During this time of the year, the 603m waterfall puts on its best show. A drive to the waterfalls is a popular day trip with a maximum of 300 jeeps allowed per day. Private vehicles are no longer allowed so in order to reach the falls one must join a tour.