The 12 Best Flea Markets In The World 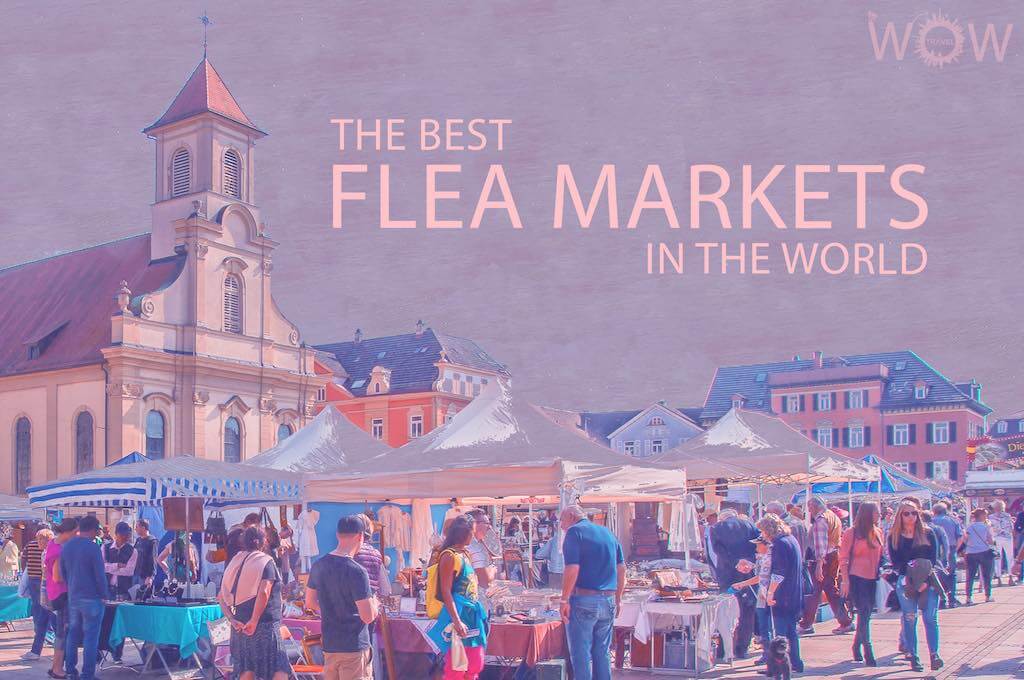 Who doesn’t love a good bargain when shopping, especially on a holiday! If you’re lucky enough to be in town when there’s a sale on then shopping is even more enjoyable when the regular prices at stores are slashed. However, if you don’t mind elbowing your way through a crowd or haggling for prices, one of the best places to find that unique souvenir is probably at a flea market. Flea markets have been around forever, right from the barter system where goods were exchanged rather than paid for. Almost every country has a flea market where you can pick up some great second-hand or brand new goods at throwaway prices. With so many diverse flea markets all over the world, zeroing in on the best is not an easy task so we’ve picked out 12 flea markets which stand out for their uniqueness.

To get the best out of the Bermondsey Antique Market in London you’ll need to follow the old adage ‘the early bird catches the worm.’ The market which is located near the iconic London Shard opens on a Friday at 6 in the morning and closes at 2 in the afternoon. This is probably because of the ancient ‘market overt’ which was abolished in 1995. According to this law, the origin of items that were sold between sunset and sunrise would not be questioned so it became an easy way to sell off stolen goods. It’s quite a sight to see bargain hunters going through the stalls with their flashlights while they’re being set up to pick up something unique before anyone else can get their hands on it. From china and silver to furniture and glassware, the market is a treasure trove for some genuine antiques.

This popular flea market held thrice a year in Massachusetts, United States, is known by various names such as the Brimfield Antiques and Collectibles Show, the Brimfield Outdoor Antiques Show and the Brimfield Antique Show. It is one of the oldest and largest outdoor antique markets in America and attracts over 100,000 shoppers from all over. The six-day long extravaganza held in Spring, Summer and the Fall has more than 6,000 vendors selling a wide range of items from garden treasures to vintage textiles and furniture. During the show, 12 fields along Route 20 are filled with numerous rows of tented booths with antique and collectible dealers from far and wide setting up shop to sell their wares.

If you’re in Bangkok on a weekend you won’t be disappointed if you plan a day trip to the Chatuchak Weekend Market. The market was once a popular spot for traders and wholesalers, but today the sheer size of the market has put it on the tourist map. Spread over 35 acres, the market is home to more than 8,000 market stalls, selling anything that you can think of. A word of caution when shopping for antiques here is not to take them at face value, even if the vendor does tell you that it is ‘genuine.’ Also, make sure you have some good bargaining skills or you may just end up paying much more for something that really isn’t worth it.

Open every Sunday and bank holiday, the lively open-air market in La Latina, Madrid is one of the oldest and biggest flea markets in Spain. The name which literally means ‘The Trail’ is probably from the time when tanneries existed in the area. Animals that were being transported from the slaughterhouse to the tannery presumably left a trail of blood on the street, hence the name. There are hundreds of stands located along two streets which sell anything from clothes, furniture, comics, utensils, and jewelry. Shops along the main street usually sell new clothes but the stalls on the side streets are where you will find the hidden treasure. We recommend staying at one of the 11 Best Hotels in Madrid near this attraction.

This is a bi-weekly market held every Tuesday and Saturday in the pretty Alfama district of Lisbon, behind the church of Sao Vicente de Fora. Feira da Ladra, the oldest open market in Lisbon once attracted all kinds of second-hand goods whose origins were questionable (hence the name which translates as ‘thieves market’). Today, however, you can find an assortment of items from unexpected treasures of Portugal among some handmade artisan goods and antiques to junk. Like most flea markets, this market too opens fairly early so if you want to find something really worthwhile, make sure to get here before the crowds.

If you’re in Berlin then a trip to the Flohmarkt in Mauerpark should definitely be on your list of things to do. There’s something at this flea market for everyone, even the skeptical wanderer, and so it is extremely popular with trendy Berliners and tourists looking for a good bargain. You can find some great vintage treasures hidden among handmade products being sold by students and artisans. However, even if your wanderings don’t throw up any hidden gems, you can enjoy some great street food at the numerous food stalls or immerse yourself in the music of the live bands.

This 150-year-old flea market located in the north of Paris is possibly the largest of its kind in the world. It is spread over 12 markets which have developed over a period of time and open from Saturday to Monday. You can find a wide range of items in varying styles from different eras and various countries as you wander along the alleyways that make up the market. The Marché Paul Bert Serpette is one of the trendiest parts of the market where you can find the finest furniture, art, and decorative items from antiquity to the 1970s. For big buyers, one of the plus points of shopping here is that the market also offers a great shipping service.

The Monastiraki Flea Market in Athens bears a strong resemblance to the Grand Bazaar in Istanbul on weekdays with its assortment of wares and the constant stream of shoppers. On Sundays however, the market has a distinctive local flavor when the main shops close and locals take to the streets to buy and sell anything and everything. Don’t be surprised if you manage to pick out the real gem hidden among hundreds of fakes. The Sunday flea market which stretches beyond Monastiraki and spills into Psiri and Thission is a great place to feel the local vibe. Some of the best hotels in Athens are located around here.

The Portobello Road Market located in Nottinghill, London boasts of being the largest antique market in the world with over 1,000 dealers selling all kinds of antiques. Saturday is the day for the antique dealers, but the market which is lined with well established independent boutiques is open six days of the week. The market has various sections where you can buy everything from second-hand clothing, jewelry, and antiques to fresh fruit and vegetables.

One of the most legendary flea markets in the world is located close to the Rose Bowl stadium in Pasadena, California. The flea market which has been around for 50 years attracts all kinds of shoppers, from hardcore bargain hunters to famous celebrities and casual window shoppers. Open on the second Sunday of each month, the Rose Bowl Flea Market is where you can find some of the best surfboards at giveaway prices. There are over 2,500 vendors selling antiques, vintage clothing, specialty products, and local art so you’ll definitely be able to pick out something from this wide choice. A special feature of the market is the VIP pass which allows you to begin shopping as early as 5 in the morning before the market opens to the regular shoppers at 9.

Every Sunday from about 10 in the morning until 4 in the evening, the cobblestone streets of San Telmo come to life with vendors and shoppers. The Sunday Fair which originated in 1971, is one of the most popular events in this part of Buenos Aires, Argentina. The real Feria de San Telmo happens at the Plaza Dorrego which houses many antique booths. Memorabilia from Argentina’s past to handmade trinkets and vintage clothing can be found along the street. While you take a breather from treasure hunting be sure to catch a performance of the tango dancers and street performers that area is famous for.

Ever since this monthly market opened in 2011, it has been a hot spot for bargain hunters from the Bay Area of San Francisco. The market which was originally called the Treasure Island Flea is held on the last Saturday and Sunday of the month from February to November. When the flea market opened, it became a good space for indie designers to showcase their goods. Today you can find anything from unique upcycled merchandise to traditional vintage flea market items, unique to the Bay Area. There are also plenty of eating options with over 35 food trucks setting up shop to cater to hungry shoppers.