Top 10 Things To Do In San Francisco 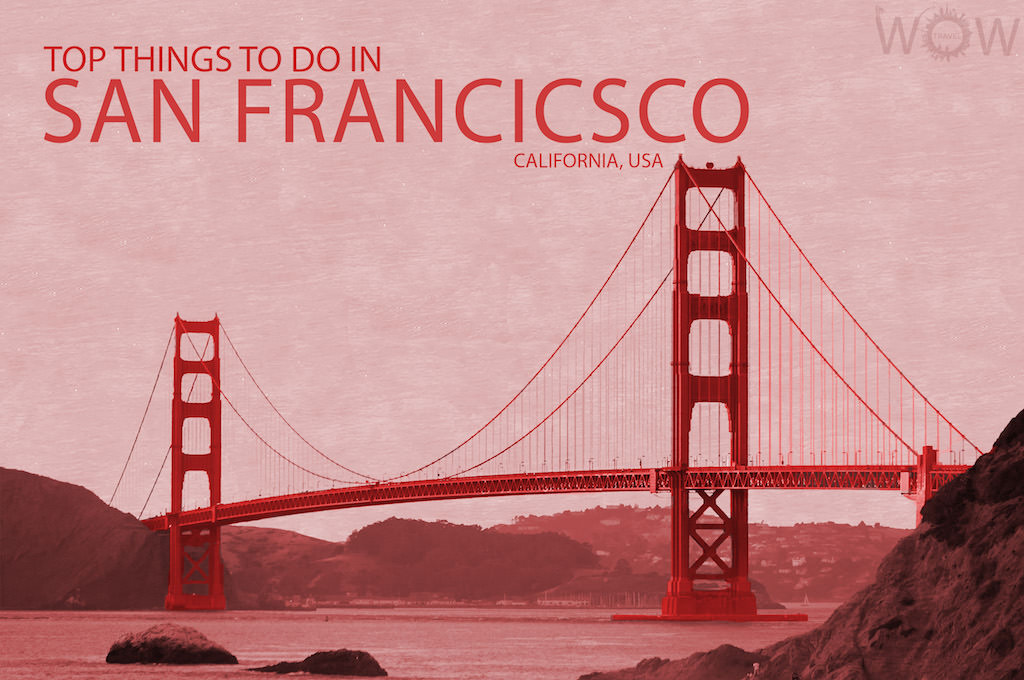 Explore one of the most fascinating destinations in the world. Although the city is “big” in terms of attractions and amenities, it is geographically small – only 49 square miles. So it is very easy to see and discover endless things in a short period of time. From historic Fisherman’s Wharf and Pier 39 to the world-famous Golden Gate Bridge. Find amazing shopping and dining in Union Square and Chinatown, ride a cable car across town, along streets lined with elegant Victorian homes, take a cruise to Alcatraz Island and enjoy beautiful views of the city or enjoy the wild and exhilarating nightlife. San Francisco has it all. Here are our picks for the Top 10 Things To Do In San Francisco.

“San Franciscans are very proud of their city, and they should be. It’s the most beautiful place in the world.” – Robert Redford

San Francisco’s Lombard Street is best known for the one-way section in which the roadway has eight steep and sharp turns that have earned the street the distinction of being “the crookedest street in the world.” he street was named after Lombard Street in Philadelphia by San Francisco surveyor Jasper O’Farrell.

If there’s any area of San Francisco that evokes images of the long-gone ’60s hippie culture, the Haight is it. The birthplace of America’s counter-culture. You can still experience the flavor of that era at many of the shops on haight. Mixed in between those shops of the ’60s up and down Haight, high-end vintage clothing stores and a number or exclusive boutiques, many hip restaurants  and chic cafes have sprung up all with their own flavor and color.

Before the dot-com bubble, this district maintained a precarious balance between its colorful working-class latino roots and a gritty bohemian subculture. In the last decade, more and more young people moved in and Mission District became America’s Best Hipster Neighborhood with strong independent arts community filled with studios, galleries and performance spaces.  There are plenty music shops, cupcakeries, boutique clothing stores, bars and restaurants. What we love about The Mission is the amazing diversity and lack of pretense in this historically hip neighborhood. Head toward 24th Street, or across Cesar Chavez toward 30th St so you can get a real authentic experience.

Union Square is a landmark beautiful urban park in the heart of the downtown with an extensive collection of boutique and luxury retail shops, flagship hotels, art galleries, cafes, restaurants, theaters and night clubs. Union Square is a wonderful place to enjoy an afternoon of shopping, indulge in a delicious meal, sip a cup of coffee at an outdoor café, catch a show, grab drinks with friends or just people watch. All this plus a wide array of fabulous hotels (including some of the 11 Best Hotels In San Francisco) where you can rest in comfort make Union Square a gathering place and destination.

“The Bay Area is so beautiful, I hesitate to preach about heaven while I’m here.” – Billy Graham

Located at 600 Montgomery Street in the heart of the financial district, The Transamerica pyramid is likely the single most iconic piece of the San Francisco skyline. The iconic Transamerica pyramid was constructed in 1971 and it has 48 floors shaped like a narrow pyramid & housing a visitor center that includes a Historical displays Chronicling the Pyramid from Conception to its Importance to the Skyline today, Live 360ºCamera Feeds from the Top of the Pyramid and Historical Video About the Pyramid and the Financial District.

“Alcatraz and history go hand in hand. Once home to some of America’s most notorious criminals, the federal penitentiary that operated here from 1934 to 1963 brought a dark mystique to the Rock. The presence of infamous inmates like Al “Scarface” Capone, and the “Birdman” Robert Stroud helped to establish the island’s notoriety. To this day, Alcatraz is best known as one of the world’s most legendary prisons. Many people, though, are unaware of the wealth of other stories to be learned on the island. Alcatraz is now home to rare flowers and plants, marine wildlife, and thousands of roosting and nesting sea birds. Civil War-era buildings dotting the island give insight into the 19th century when the island served as both a harbor defense fort and a military prison. You can also see visible reminders of the American Indian Occupation that started in 1969 after the prison closed, highlighting an important milestone in the American Indian rights movement.” Experience the beauty, history and infamy of Alcatraz on the San Francisco Bay with Alcatraz Cruises.

with more than 13 million visitors each year the Golden Gate Park is one of San Francisco’s greatest treasures. It is  a picturesque public space where city dwellers can relax and reconnect with the natural world. Within Golden Gate Park’s 1,017 acres you’ll discover gardens, playgrounds, lakes, picnic groves, trails, and monuments, plus an array of cultural venues, events, and activities.

San Francisco Chinatown is the largest Chinatown outside of Asia as well as the oldest Chinatown in North America. It is one of the top tourist attractions in San Francisco. You can use this site to learn more about the attractions, culture, history, and events in Chinatown. If you plan to visit us, you can book a Chinatown tour, hotel rooms, and more.

Take a walk along the Golden Gate Bridge. A true American Icon with a rich history, opened to pedestrians on May 27, 1937. At that day, nearly 200,000 people walked, ran, tap-danced and roller-skated across what was then the longest suspension bridge ever built in the world. The next day, the Golden Gate Bridge opened to automobile traffic. It is truly an engineering marvel, a structure of magnificence, grace and beauty. The Bridge connects San Francisco to California’s northern counties. With its tremendous 746-foot tall towers, sweeping main cables, signature International Orange color, and Art Deco styling, it is a sensory experience featuring color, light, and sound.

“San Francisco itself is art, above all literary art. Every block is a short story, every hill a novel. Every home a poem, every dweller within immortal. That is the whole truth.” – William Saroyan