Top 15 Things To Do In Paris 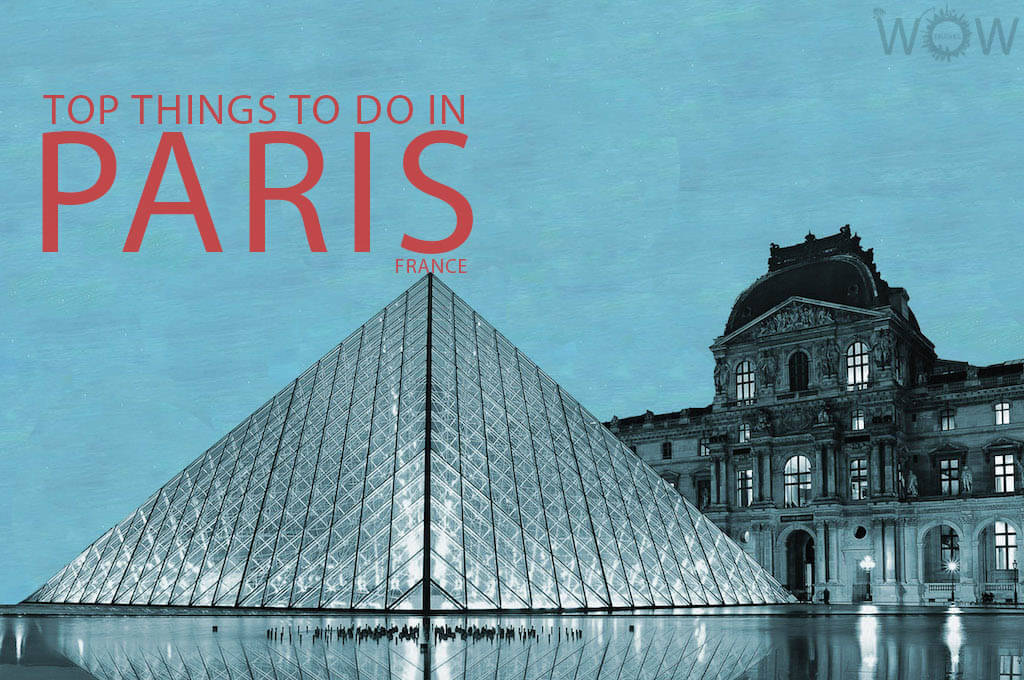 The capital city of France, Paris, is one of the world’s great travel destinations. Its well-known attractions, such as the Eiffel Tower, Arc De Triomphe and The Louvre, have captured the hearts and imagination of travelers from all over ethe world. The city of lights is full of history with incredible architecture, art and culture. These are the Top 15 Things To Do In Paris.

Notre Dame is one of the finest gothic cathedrals in Europe. The spindly gothic buttresses and magnificent stained glass windows will leave you speechless. You can climb up the 400 steps to the top of the bell towers for an outstanding view and a closer look at some of its decorative gargoyles. Can’t get enough of the view? Stay at one of the 11 Best Hotel Pools In Paris.

Arc De Triomphe is one of the most iconic monuments in Paris and a symbol of the French nation. It links old and new Paris, standing on the highest point of the line running from the Louvre to the Grande Arche de la Défense. It honors those who fought and died for France in the French Revolution and the Napoleonic Wars, with the names of all French victories and generals inscribed on its inner and outer surfaces. As many countries do, France has a Tomb of the Unknown Soldier, and this tomb happens to be under the Arc de Triomphe.

The Louvre Museum is consistently the world’s most visited museum, and for good reason, the Louvre is famed for having some of the most impressive and famous masterpieces of art in the world such as the Mona Lisa, Venus de Milo, The Wedding at Cana Painting, Hammurabi’s Code of Laws, Virgin of the Rocks, Winged Victory of Samothrace and other 35,000 masterpieces, from prehistory to contemporary works.

The Palais Garnier is a 19th-century architectural masterpiece and a 1,979-seat opera house, which was built from 1861 to 1875 for the Paris Opera by architect Charles Garnier. It is one of the ‘most grandiose Italian-style theatres’ in the world. Palais Garnier still hosts performances staged by the Opera National de Paris, but it is open to visitors during the day.

opened in 1977 to honor president Georges Pompidou, Centre Pompidou is a complex building in the Beaubourg area of the 4th arrondissement of Paris with the largest collection of modern art in Europe. It has more than 50,000 works of art by 5,000 artists, representing Primitivism, Fauvism, Cubism, Dadaism, Surrealism, American Color-Field painting and Abstract Expressionism. The Pompidou Centre reveals its unique, timeless and modern architecture, offering rooftop views of the city are also in order.

Located at the top of a huge hill in Montmartre. The Basilica of the Sacred Heart of Paris, commonly known as Sacré-Cœur (Sacred Heart), is a 19th century Roman Catholic church and minor basilica. It was designed by the architect Paul Abadie in the Romano-Byzantine architectural style. It was intended as a public monument to mark the memory of the many French citizens who lost their lives in the Franco-Prussian War. The Sacre Coeur has some of the best views of Paris, so make sure you come right before the sunset.

“Montmartre is were many world renowned artists spent their lives, such as: Picasso, Van Gogh, Monet and Salvador Dali. This magical neighborhood typifies all things quintessentially Parisian, from terrace cafes to romping bars and clubs, drunken can-can dancers to budding street artists and performers, bourgeois-bohemian apartments to tiny cobblestone streets.  Vincent Van Gogh, Toulouse Lautrec, Claude Monet, Pablo Picasso and Salvador Dali once called this eclectic district home. Don’t miss The Love Wall, a mural that contains the phrase “I love you” written in almost every language on earth.

The symbol of Paris and of France. The iron lattice tower, which continues to serve an important role in television and radio broadcasts, is considered an architectural wonder and attracts more visitors than any other paid tourist attraction in the world. The Eiffel Tower was originally built as the entrance arch for the World’s Fair in 1889 and it was the tallest man made structure in the world for 41 years before being surpassed by the Chrysler Building in New York. Millions of people climb the Eiffel Tower every year and you must do it as well. Can’t get enough of the view? We recommend staying at one of the 11 Best Hotels In Paris With Gorgeous Eiffel Tower Views.

“The Latin Quarter, located on the Left Bank, is part of the historic core of Paris and it bears the imprint of the Sorbonne, its historic core, as well as famous writers and intellectuals from around the world. Suffice it to say, this is a complex and enormously varied area of Paris. Latin was once spoken at the Sorbonne and was the common language in this quarter of Paris, which explains its name. The Latin Quarter and surrounding areas offer fabulous cafes and numerous spots for observing the “soul” of Paris, while you rest up before visiting the next spectacular attraction.” Source: TheRearePlaces

Champs-Elysées is arguably one of the most famous and beautiful avenues in the world and the most famous shopping street in Paris. The Champs-Elysees connects the The Arc de Triomphe to the Palace de la Concorde.

Experience and discover Paris by walking along the Seine River. There are 37 bridges that cross the river but Bir-Hakeim bridge and Pont des Arts bridge are amongst the most famous. The best time is around sunset time and in the evening when you can see the city’s landmarks illuminated, including the Notre Dame cathedral, Hotel de Ville, and the Eiffel Tower.

Opened in 1804,Père Lachaise is the world’s most visited cemetery and Paris’s largest cemetery, with over 100 acres of graves, tombs and memorials and 69,000 ornate tombs. There many famous people who are buried here such as Jim Morrison, Vincenzo Bellini, Frédéric Chopin, Marcel Proust, Oscar Wilde, Marcel Marceau, Jean de la Fontaine and Molière.

Very close to the Panthéon in the 6th arrondissement, there are beautiful palatial gardens set around the Luxembourg Palace. Jardin du Luxembourg is the second largest public park and one of the most impressive in Paris. The park contains hundreds of statues, monuments and fountains and you can easily spend all day wandering around.