Top 10 Things To Do In Athens 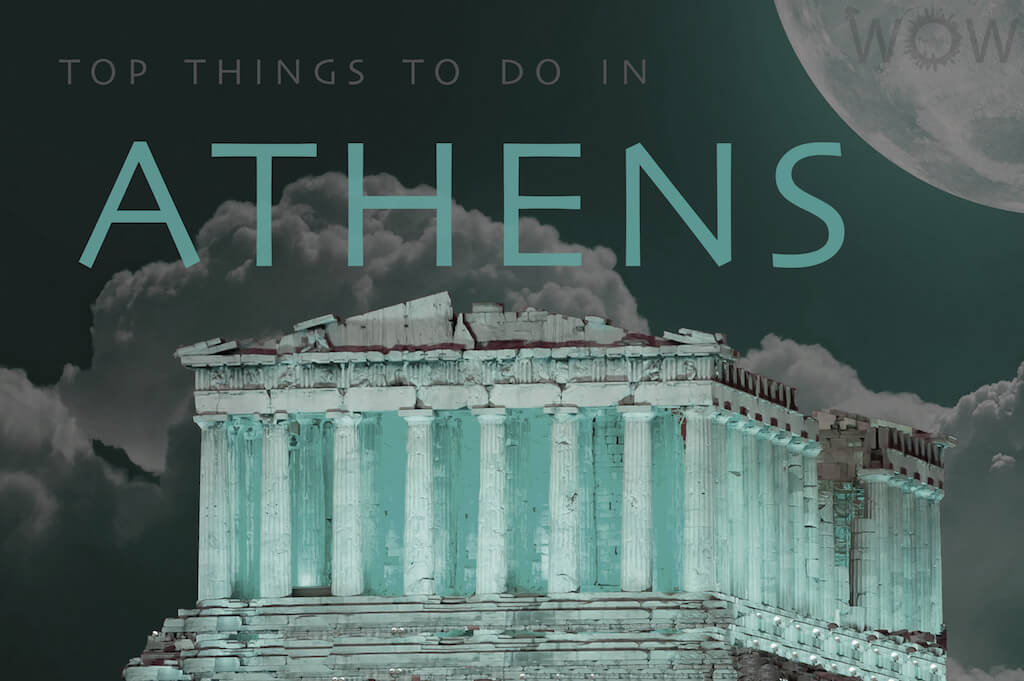 With a population of over 3 million people, Athens is Greece’s biggest city, as well as a center for politics and tourism. Well known as the Cradle of Civilization, Athens prides itself for being the origin of democracy, Western philosophy, Olympic Games, political science, Western literature, major mathematical principles, and theatre. The history of Athens spans around 3,400 years, making it one of the oldest cities in the world and many prominent rulers, writers, philosophers, scientists and politicians, including Alexander the Great, Socrates, Aristotle and Plato belonged to this amazing city of Greece. WOW Travel shares with you its Top 10 Things To Do In Athens.

Built at the foothill of the Acropolis, Pláka is the old historical neighborhood of Athens. Most of the streets have been closed to automobile traffic and it feels like a village within the city with picturesque neoclassical houses and mainly pedestrian streets.

The Temple of Olympian Zeus, also known as the Olympieion, is an Greco-Roman temple in the center of Athens. The Temple of Olympian Zeus was an enormous structure, its unusually tall columns and ambitious layout made the temple one of the largest ever built in the ancient world and the largest temple in Greece, exceeding even the Parthenon in size. The 104 columns, each 17 meters (56 feet) high, of the temple were made of Pentelic marble. Only 15 of the Corinthian columns remain standing to give a sense of the enormous size of the temple. This temple is very close to other monuments of Athens, such as Kallimarmaro Stadium, the Hadrian’s Arch and Zappeion Megaron.

Syntagma (Constitution) Square is home to the Parliament Building, home to the Greek Parliament but once the palace of the Kings of Greece. The Square is also home to the tomb of the unknown soldier and the traditionally dressed, pom-pom toe-ed guards, known as Evzoni. You can see the Changing of the Guard here every hour and if you’ve travelled all the way to Athens it worth hanging around to see the ceremony. Source: contiki

Rising 277 meters (908 ft) above sea level. Getting yourself up to the top gives youa full 360 panorama of the ancient city of Athens, Aegean sea and the ships in Piraeus. Apart from the view, there is also a restaurant, a 19th century Chapel and an amphi theatre up there.

The Church of Panaghia Kapnikarea is the oldest church in Athens, it was built during the middle of the 11th century. The church is dedicated to Saint Mary but it is better known as Kapnikarea. As with other Early Christian churches, it was built over an ancient Greek pagan temple which was once possibly dedicated to Athena or Demeter.

With the up and coming areas like Gazi getting more popular we should not overlook Psiri with its endless small streets of cafes, ouzeries, restaurants, bars, clubs, theatresand galleries, all within a minute’s walk from Athinas and Ermou streets or Monastiraki square. Join the crowds on a weekend night, especially during Apokreas, Greece’s Carnival. Psiri came of age as the center of Athens nightlife during the 2004 Olympics and regardess of what people say about its commercialism, you won’t find a cooler place to be in any city in Europe or America. You can feel the buzz as you walk past cafes where a hundred people are talking, drinking and smoking simultaneously or you can find a tiny little cafe on a back street with two or three tables and a guy grilling soupia (cuttlefish) or octopus. Or find a nice ouzerie in Platia Iroon where some rembetis are playing un-plugged. Source: athensguide

Exarcheia is a neighborhood situated between the University of Athens and the Politechnion, offers a glimpse into the country’s recent political turmoil as well as the intellectual and counter-culture side of the city. There are few places in Europe where you can find riot police squads in full gear, permanently stationed around buzzing cafes and restaurants. Some people call it ‘a punk Disneyland’, a neighborhood of Athens that few tourists dare venture into.

The Agora, the marketplace and civic center, was one of the most important parts of an ancient city of Athens. In addition to being a place where people gathered to buy and sell all kinds of commodities, it was also a place where people assembled to discuss all kinds of topics: business, politics, current events, or the nature of the universe and the divine. The Agora of Athens, where ancient Greek democracy first came to life, provides a wonderful opportunity to examine the commercial, political, religious, and cultural life of one of the great cities of the ancient world. The earliest archaeological excavations in the Athenian Agora were conducted by the Greek Archaeological Society in the 19th century. Since 1931 and continuing to the present day, the excavations have been conducted by the American School of Classical Studies in Athens. Source: stoa

The greatest and finest sanctuary of ancient Athens, dedicated primarily to its patron, the goddess Athena, dominates the center of the modern city from the rocky crag known as the Acropolis. It is is probably the most famous and most visited monument in the world from the Antiquity times.  Acropolis means ‘high city’ in Greek. Most city-states in ancient Greece had at their center a rocky mound or hill where they built their important temples and where the people could retreat to if under attack. The most famous acropolis is the one in Athens. The Athenian Acropolis is home to one of the most famous buildings in the world: the Parthenon. This temple was built for the goddess Athena. It was decorated with beautiful sculptures which represent the greatest achievement of Greek artists. Source: ancientgreece