Top 12 Things To Do In Berlin 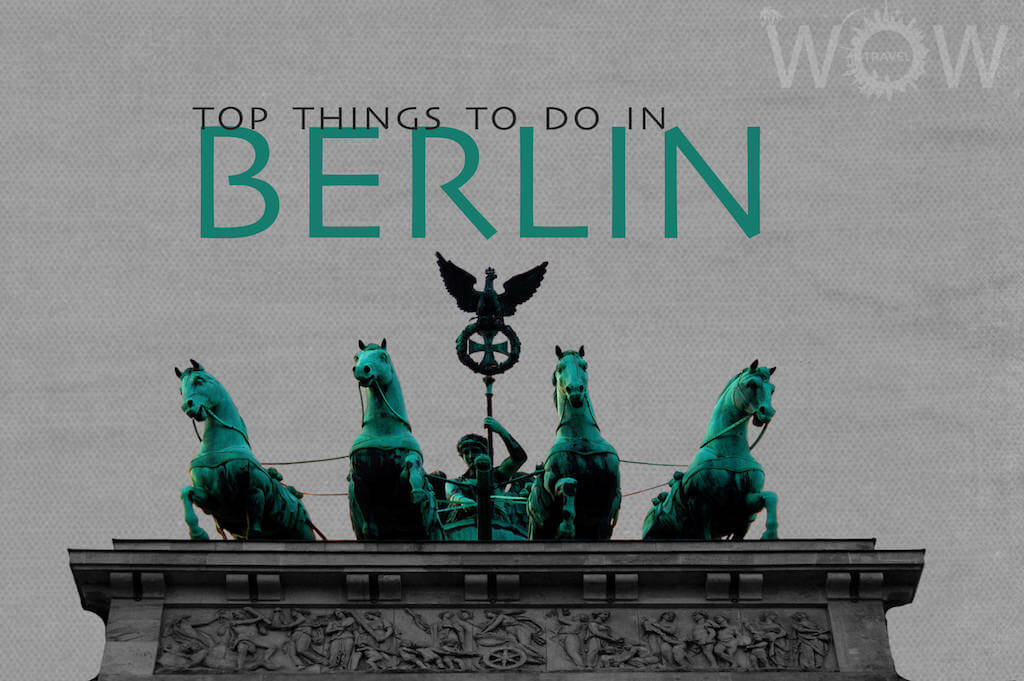 Berlin is more a part of the world than a city. it is a pulsing, exciting city with so many diverse and distinctive neighborhoods, iconic history all around, cutting-edge architecture, vibrant culture, intensive nightlife and great food from every corner of the world. Berlin is not really about the sites, it is not Paris. It is about the places people congregate – in bars, clubs, events, markets, parks etc. – that’s where Berlin is. Check out our list of the Top 12 Things To Do In Berlin.

The Potsdamer Platz is the old heart of Berlin and one of the most exciting and multifaceted corners of the German capital, serving as a junction between the old city centre in East Berlin and what was formerly the new West Berlin. Up to 100,000 people come to this square every day to experience the unique blend of art, entertainment, shopping and cosmopolitan flair – and ultimately to feel a touch of history.

Endure the long queues and stringent security to catch the lift to the top of the seat of Germany’s parliament. The Reichstag is a fitting example of Berlin’s weird mix of the old and new: the original building was constructed in 1884 and fell into disrepair during the Second World War, before being restored after reunification with the addition of its ethereal and strikingly modern glass dome, designed by Sir Norman Foster. Wind your way up the spiral walkway for 360-degree views of Berlin, stare up the mirror-clad core and walk out onto the wind-swept viewing platforms.

It’s a colorful section of the original Berlin Wall, which once divided the city into East and West Berlin. After the wall fell in 1989, hundreds of artists from all over the world came to Berlin to transform the grim and gray wall into a piece of art. They covered the east side of the former border, which had been untouchable up to then, with more than 100 paintings and turned the into the largest open-air gallery in the world.

A unique ensemble of five museums, located in the heart of Berlin. As with many of the structures in Berlin, the old museum buildings were nearly destroyed during the Second World War but are now open. The Altes Museum displays ancient Greek and Roman artifacts, while the Alte Nationalgalerie houses the largest collection of 19th-century paintings and sculptures in Germany. The Neues Museum houses prehistoric pieces and Egyptian art, including the bust of Queen Nefertiti. The Pergamon Museum contains another display of Greek and Babylonian antiquities. The Ishtar Gate and Pergamon Altar are here. Finally, the Bode Museum displays a large collection of sculptures, numismatic (coin) collections and a number of paintings.

368 meters (1,197 ft) tall, the Fernsehturm TV-Tower is the highest building in Berlin. If you’d like a new perspective on Berlin, experience it from above. You can look out over the entire city with its large number of tourist attractions: you can see the Reichstag, the Brandenburg Gate and the Main Railway Station from here, as well as the Olympic Stadium, the Museum Island and the Potsdamer Platz. With almost 1.2 million visitors every year, the Berlin TV tower is one of the most popular attractions for tourists in Berlin. It is worth booking your Tickets in advance.

A lovely boulevard lined with linden trees is one of the main east-west routes through Berlin. The trees were first planted in the mid 1600s and are cared for and cultivated by the city. Greatly damaged during the war, Unter den Linden has been renovated and is currently lined with many architectural sites and other tourist attractions in Berlin including the German Historical Museum, the Staatsoper, Humboldt University and the Palace Bridge.

Built in 2005, the Holocaust Memorial is a beautiful, yet sobering reminder of Nazi atrocities. Also known as the Memorial to the Murdered Jews of Europe, the Memorial is a 4.7 acre site that is lined with 2,711 concrete slabs that are all the same length, but are of varying heights. The way the concrete slabs, or stelae, are aligned is symbolic of an “ordered system that has lost touch with all human reason”.

Berlin’s Tiergarten used to be the hunting grounds for the Prussian kings, before it was transformed into the city’s largest park in the 18th century. Today, the green heart of Berlin covers 600 acres, you can enjoy leafy paths, small creeks, open-air cafes, and lush lawns; in the center of the park, you’ll find the golden Victory Column, a 70 meter (230 ft) high monument, commemorating Prussia’s victory over France in 1871.

The Berliner Dom (Berlin Cathedral), completed in 1905, is Berlin’s largest and most important Protestant church as well as the sepulcher of the Prussian Hohenzollern dynasty. This outstanding high-renaissance baroque monument has linked the Hohenzollerns to German Protestantism for centuries and undergone renewed phases of architectural renovation since the Middle Ages. First built in 1465 as a parish church on the Spree River it was only finally completed in 1905 under the last German Kaiser -Wilhelm II. Damaged during the Second World War it remained closed during the GDR years and reopened after restoration in 1993.

Markthalle Neun is a historical market, that reopened in 2011, precisely 120 years after its original opening. The stands are open for lunch Monday through Saturday, drawing in a local crowd with a rich selection of delectable goodies. Recommendable bites include the pulled pork BBQ sandwich from Big Stuff, the smoked fish from Glut & Späne and the daily special of hearty German fare from Kantine Neun. It’s fresh, it’s cheap, and it’s good. For more variety, hit the market on Street Food Thursdays when it opens for the night with everything from Vegan ice-cream, British pies to Amazing spare ribs, Thai tapioca dumplings , Mexican tacos, Allgäu cheese spaetzle and Nigerian FuFu being offered. It’s like food truck heaven has descended on Kreuzberg for the evening.

Weserstrasse, in Neukölln, is the center of the bar scene in Berlin. It is about a mile of bars, restaurants, cafés, clubs, galleries and shops that locals don’t want you to know about. The street is especially busy over the weekends when a bevy of young creatives and locals gather to enjoy their free time.