The 12 Best Carnivals Around The World 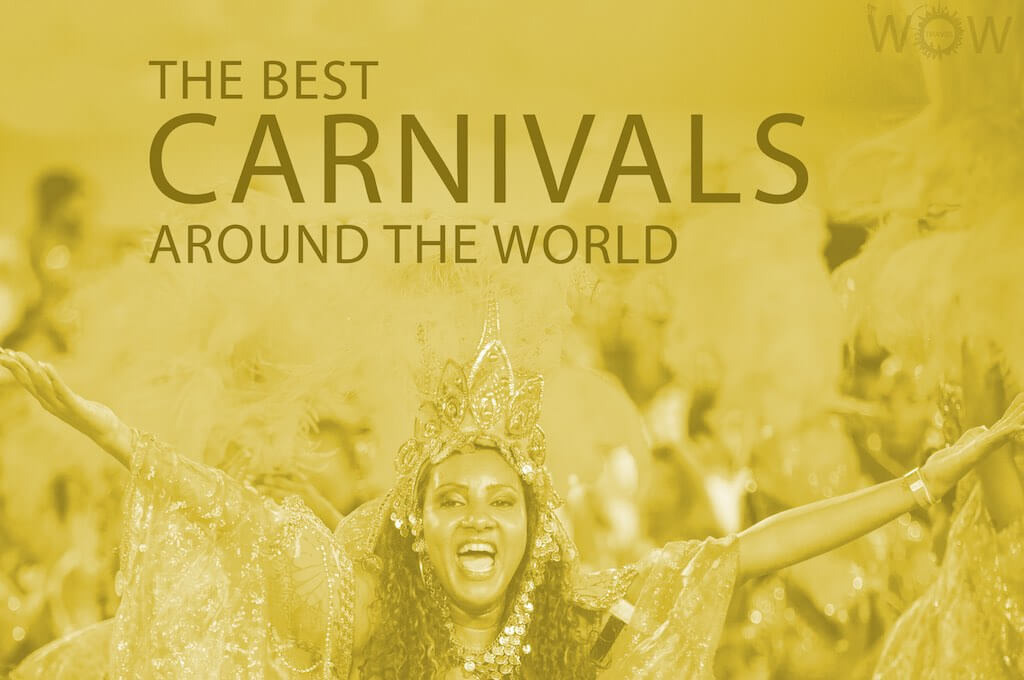 Some of the biggest street parties in the world take place during Shrovetide, which is the period just before Lent. The Carnivals that happen in different parts of the world, bring revelers and fun-loving crowds onto the streets to celebrate before the forty-day fasting period begins. Parades, street parties and other forms of entertainment are just some of what the carnivals have in store. Elaborate costumes, masks, and various competitions are also some of the characteristic features of a carnival. Almost everyone is familiar with the Carnival of Rio de Janeiro, but the other carnivals that we’ve highlighted below are also as full of life as the one in Rio.

The Carnival of Basel is on the list of top fifty local festivals in Europe and is also a part of the UNESCO “Masterpiece of the Oral and Intangible Heritage of Humanity” list. This carnival does not take place before the beginning of Lent but begins on the Monday after Ash Wednesday in the early hours of the morning. The Basler Fasnacht lasts for 72 hours beginning at 4 in the morning on Monday and ending at 4 in the morning on Thursday. Before the official opening, all the lights in the city are switched off and the Carnival-themed lanterns are turned on to the accompaniment of music. The “Endstreich” marks the end of the carnival.

This is another carnival which has also made it to the UNESCO list of a “Masterpiece of the Oral and Intangible Heritage of Humanity.” The carnival which is held in the town of Binche in Belgium dates back to the 14th century. Events start happening seven weeks prior to the main celebrations, generally on the Sundays closer to Ash Wednesday. Like the other carnivals, dancing, marching, and musical acts are a large part of the Carnival of Binche. One of the hallmarks of the carnival is the clown-like performers known as Gilles. About 1,000 Gilles who are males in the age group of 3 to 60 years gather at any given time. They usually throw oranges to spectators who cannot throw them back as it will be considered an insult.

The main events of the Cologne Carnival take place two days before Ash Wednesday on what is called Rose Monday. However, merry-making on the streets begins on Fat Thursday when the streets are officially declared open. This week-long street festival is filled with masquerades, and parades and attracts about one million spectators, especially on Rose Monday. The carnival season also called the “fifth season” traditionally begins on the 11th of November, the 11th month at 11 minutes past 11. The celebration on the streets, however, is only before Lent.

Unlike most of the carnivals around the world which mark the beginning of Lent, the Copenhagen Carnival is celebrated during the Whitsun holiday, which is the seventh Sunday after Easter. The streets of Copenhagen come to life for three days, beginning on Friday and ending on Sunday. Faelledparken, the main venue of the carnival is outfitted with eight stages which showcase the music of various genres. A number of music styles are represented along with the traditional samba and steelpan music. The main parade takes place on Saturday and is repeated the next day too in Faelledparken. Previously, Rosenborg Castle Garden used to be the main venue for the festival.

Colorful costumes and exuberant celebrations are what the Trinidad and Tobago Carnival is characterized by. The carnival extends over two days before Ash Wednesday. Calypso music used to be traditionally played at the festival but in recent years it has been replaced by Soca music, a more popular genre. Limbo, a traditional dance contest, costumes, and stick-fighting competitions are essential elements of the festival. When the carnival began in the 18th century, only the white elite were allowed to participate, but after the emancipation of slaves in 1834, African slaves took to the streets to celebrate their freedom, reenacting the carnival. The whites eventually backed out of the celebrations as they found them to be too vulgar and savage.

Celebrations for Mardi Gras or Shrove Tuesday, commence two weeks before the start of the season of Lent and ends with a big bang a day prior to Ash Wednesday which is also referred to as ‘Fat Tuesday.’ The “Meeting of the Courts,” brings the revelry and celebrations to a close. Mardi Gras is celebrated in all of Louisiana, but the celebrations at New Orleans bring in the crowds, especially to Bourbon Street. Closer to Ash Wednesday there are elaborate parades and balls organized by social clubs called krewes.

The Nice Carnival is another major carnival similar to the Rio and Venetian Carnivals. An account of the carnival first appeared in 1294, probably making this the original carnival celebration. Over a million visitors converge onto Nice during the days of the carnival which takes place over two weeks in February. A special theme is chosen for the 18 floats which are created by traditional artists using papier-maché. Competitions, masquerades, and floats make up the parade.

This street party has been happening in London since 1966. The festival was initially envisioned as an event to promote cultural unity, but the party for the neighborhood children soon became a carnival procession. Unlike the other carnivals which are usually held during Lent, this carnival is spread over two days in August. About a million people come from all over to be a part of the Notting Hill Carnival, which is led by the British West Indian Community.

The Carnival of Oruru in Bolivia is a religious festival that dates back to more than two centuries. Formerly a festival that was only celebrated by the indigenous people, the carnival has now evolved to include Christian rituals. This historical festival is also a part of UNESCO’s Masterpieces of the Oral and Intangible Heritage of Humanity. The carnival takes place before the beginning of Lent. The high-point is the three-day and night parade to the sanctuary of the Shrine of the Tunnel by 48 groups of folk dancers.

If you want to be a part of the biggest outdoor party in the world then Rio de Janeiro is where you should head to before Lent. The Carnival of Rio de Janeiro is the biggest carnival in the world having its origins in 1723. More than 2 million people hit the streets of Rio during the carnival every day. Floats, revelers and adornments from the various samba schools are the highlights of the carnival. Although the parades are held in the Sambadrome, an exhibition place with viewing galleries for spectators, many events are organized on the street also.

The second most popular and internationally renowned carnival, after the one at Rio de Janeiro, the Carnival of Santa Cruz de Tenerife is also celebrated before Lent. Santa Cruz de Tenerife is the capital of the largest of the Canary Islands. The streets of the capital come to life on the Friday before the Carnival when the Announcement Parade is held. Once the carnival is officially opened the celebrations continue until Ash Wednesday. The burial of the sardine (entierro de la sardine), a traditional ritual held on Ash Wednesday marks the end of the carnival.

The Carnival of Venice in Italy is renowned for the elaborate masks that people wear. The reason for the beautiful elaborate masks is probably because, by the end of the Carnival, a prize is awarded for the most beautiful mask (la maschera piu bella). The Carnival has its origins as far back as 1162 but it was later outlawed from 1797 for almost two centuries. The modern Carnival was revived in 1979 when the Italian government decided to revive the culture and history of Venice. About 3 million visitors travel to Venice for the carnival each year just before the start of Lent.