Top 10 Things To Do In Venice 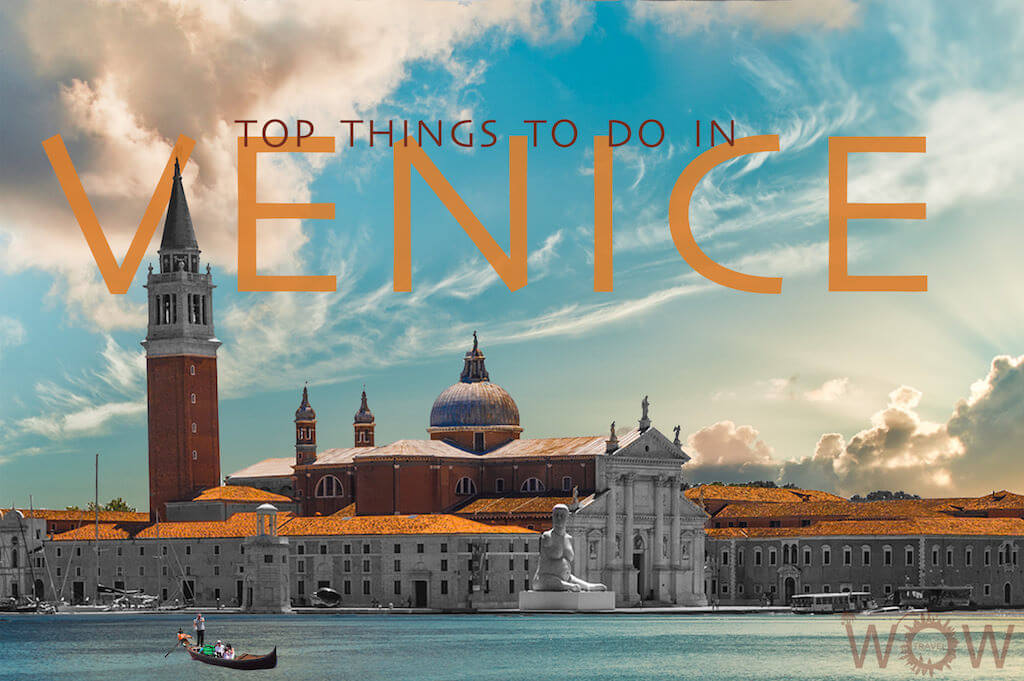 Welcome to one of Italy’s top travel cities and a beautiful, unforgettable romantic destination with many attractions. Venice is a small city, extremely concentrated, that is built on 117 small islands and has some 150 canals and 409 bridges (only three of which cross the Grand Canal) in a marshy lagoon in the Adriatic Sea. Its stone palaces seemingly rise out of the water and every corner, monument, church or museum contains a piece of history. Venice is the birthplace of composer Antonio Vivaldi and playwright Carlo Goldoni, the inspiration for writers such as Henry James and Ernest Hemingway, today it is tourists who flock to see its works of art, its beautiful buildings, and its bridges. Make sure to drift down the world-famous Grand Canal with the waterfront palazzos and churches that make it feel like cruising through a painting. There’s no better way to explore the lovely maze of Venice than in a haze of mild confusion, so get lost with the Top 10 Things To Do In Venice. If you don’t get lost, you’re not doing it right.

The glorious Grand Canal will be among the first sites you see, and invariably, it will look exactly as you imagined. Experience the majesty of the Grand Canal with Venice’s equivalent of a sight-seeing city bus tour, the Vaporetto (a public water bus). Take a ride along the canal, under the Rialto Bridge, by the colorful and crumbling facades of grand palazzos like the Ca’ d’Oro and the Ca’ Rezzonico, all the way down past the dome of Santa Maria Della Salute, before disembarking at St. Mark’s Square. We recommend staying at one of the 11 Best Hotels in Venice, Italy near this attraction.

Since the year 1097, Venetians have depended on the Rialto Fish Market in Bella Venezia, for their daily supplies of fish, squid, cuttlefish, crabs, clams, vegetables, fruit, and other foodstuffs. It is one of the largest and oldest fish markets in Italy.

The Palazzo Ducale, or Doge’s Palace, was the seat of the government of Venice for centuries. As well as being the home of the Doge (the elected ruler of Venice) it was the venue for its law courts, its civil administration and bureaucracy and — until its relocation across the Bridge of Sighs — the city jail. The system of elected doges was as singular as everything else about this very singular city, and lasted for 1000 years, from the election of Paolo Lucio Anafesto in 697AD to the deposing of Ludovico Nanin in 1789.

It has been the scene of some of the most important religious and political activities of the Serenissima as well as the center of Venetian social life for almost a millennium.  Hugh Honour describes the Piazza San Marco as “beautiful at all times of day or night and all seasons of the year. It is one of the few delicate works of architecture that can absorb a bustling vulgar crowd without loss of dignity; a great city square which retains a feeling of animation when there are few people in it”. Three of Venice’s major sites are located in this square: the Basilica di San Marco, a Byzantine marvel, the Torre dell’Orologio a famous medieval clock tower, and the Doge’s Palace, the seat of the government of Venice for centuries.

Saint Mark’s Basilica is the most famous of the many churches of Venice and one of the finest examples of Byzantine architecture in the world. It is one of the most valuable treasures of history, art and faith in the world, located in St Mark’s Square, the so-called ‘drawing room of Europe’. The first basilica was burned in 976 during a popular revolt against the doge Pietro Candiano IV but was restored under his successor, Doge Domenico Contarini (died about 1070); the present basilica was completed in 1071.

If you only make time for one museum in Venice, make it the Accademia. The collections cover the giants of Venetian painting from the 13th to the 18th centuries, and are housed in the gallery space of Venice’s Accademia Della Belle Arte (Academy of Fine Arts), established in 1750 in the former Scuola Della Carità chapterhouse and convent attached to the (deconsecrated) Santa Maria Della Carità church. It includes a very rich collection of Venetian paintings from Veneto as well, from the Bizantine and Gothic fourteenth century to the artists of the Renaissance, Bellini, Carpaccio, Giorgione, Veronese, Tintoretto and Tiziano until Gianbattista Tiepolo and the Vedutisti of the eighteenth century, Canaletto, Guardi, Bellotto, Longhi. Source: reidsitaly

Venice’s most commanding landmark, the Campanile di San Marco, stands just opposite St. Mark’s Basilica. The bell-tower of the basilica is the tallest building in Venice, at 99 meters (324 ft). A visit to the top of the Bell Tower is obvious of course to be able to enjoy the superb view that it gives on all city of Venice, Giudecca and other closest islands such as San Giorgio, Murano and Lido.

Like the Phoenix for which the theater is named, Teatro La Fenice finally rose from the ashes in November 2004. Following a devastating fire in 1996 that nearly burned the famous opera house to the ground, massive reconstruction took place to restore the theater to its original splendor. Known worldwide for its dramatic beauty, La Fenice is also known for being the cradle of many great operas. It was the site of the infamous fiasco at the premiere of La Traviata, and of the great triumphs of Tancredi and Ernani. Source: selectitaly

This wonderful palace, that now houses the Museum of Venetian 18th century, was projected by the most important Baroque architect in Venice, Baldassarre Longhena, for the noble family of the Bons and the works started in 1649. From the staircase close to the cafeteria we can reach the Browning Mezzanine, that hosts the Mestrovich Collection. This collection includes paintings by famous artists such as Bonifacio de’ Pitati and Jacopo Tintoretto. Source: venice-museum

Ca’ d’Oro is a jewel of gothic palace architecture on the Grand Canal. One of the older palaces in the city, it is known as Ca’ d’Oro (“golden house”) is derived from the initial gildings and polychrome external decorations which once adorned its walls. the palace gathers up the important art collection of the Baron Giorgio Franchetti (1865-1927), who in 1916 donated his collections and the building itself to the Italian State, after having made it magnificent as in the past with some restorations.