Top 10 Things To Do In Tenerife 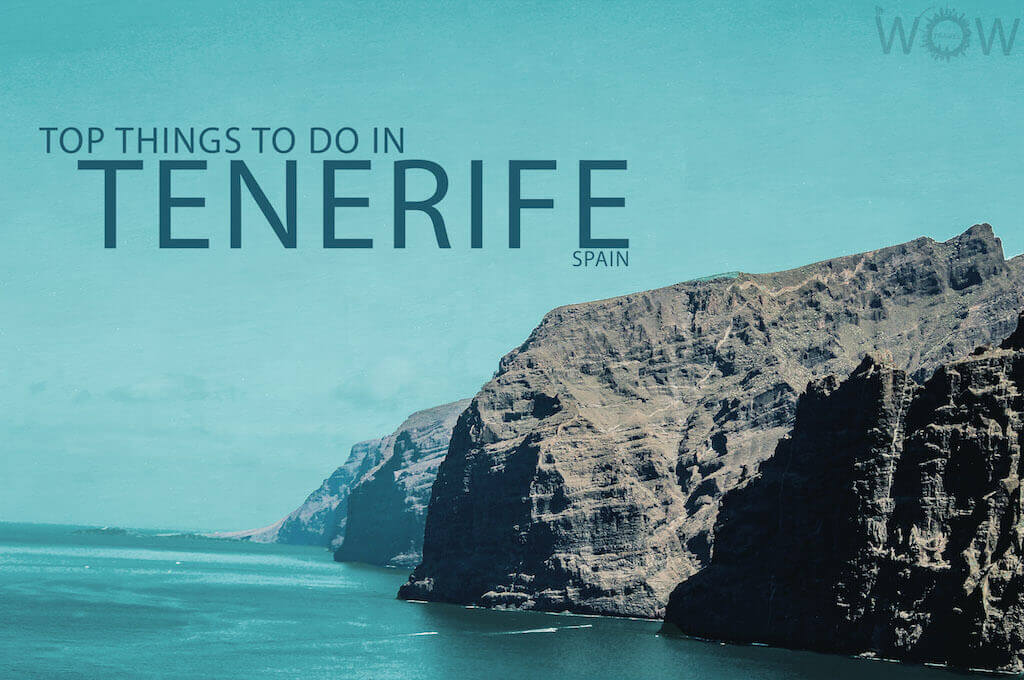 The natural beauty of Tenerife is known worldwide. People from every corner of the globe come here almost like a pilgrimage to enjoy the sun, luxury hotels, the cold and refreshing Atlantic Ocean, stunning scenery and eternal spring climate. Dreamy sunsets and black sand beaches are the best natural relaxant there is in life according to Spaniards. Great restaurants, delightful spas, exhilarating nightlife, warm and friendly people and more will make you want to move to Tenerife for good. Take a look at Tenerife’s Top 10 Things To Do.

Teide National Park is home to the highest mountain of Spain (3,718 meters high) and the third largest volcano in the world. It is definitely a very important tourist spot in the Canary Islands which receives almost 3 million visitors per year. For those who are not hikers, there are telescopes that take you to the Observatorio del Teide, a strategic spot from which one can admire the incredible landscape of this region. Take a stroll around the park and photograph some of the 168 plant species, 33 of which are endemic to Tenerife. The only mammals native to the park are bats but if you are lucky you may see a mouflo, rabbits or mice.

This fun park is a place for everyone regardless of their age. Visitors can watch dolphins, orcas, and penguins who have made their home on one of the largest icebergs outside of the polar regions! This place is, in fact, sanctuary for a wide selection of endangered species from around the world. The main attraction here are the parrots; hence, the name of the place. There is a  large parrot museum highlighting over a hundred different types of parrots.

This is how the locals call these “Giants”, the cliffs, one of the island’s major tourist attractions. You can choose between three different spots or lookouts to admire the breathtaking beauty of Los Gigantes which sometimes reach heights of 500 meters (1604 ft). Some tourists rent boats to see the cliffs from the water up close, easy to arrange with your hotel concierge.

Yes, it is a man-made attraction, but we cannot mention it. It is a great place for a day of laughter, fun, friends and families. Siam Park is Tenerife’s latest and biggest theme park, an exciting complex set in its very own tropical paradise. This place is full of water slides and adrenalin-pumping rides, from a lazy ride down the Mai Thai river in a rubber dinghy to the white-knuckle Tower of Power-slide, which plummets you down a near-vertical 30m drop, Siam Park delivers thrills and spills for the everyone who visits it.

Before boarding the boat guides and experts, who run these rides, provide you with valuable information about the whales and dolphins, around 28 species of resident and migratory whales and dolphins feed in the warm waters between Tenerife and neighboring La Gomera. It is important for them to treat the animals with the demanded respect in order to minimize any disturbance. Therefore, their skippers are specially trained to drive the boat in a careful manner but they guarantee sightings.

It is a series of six-step pyramids, also home to the Museum of Casa Chacona. Güímar is a town in the south of Tenerife and it became a tourist destination due to these impressive and beautiful pyramids. They are safely housed in the Ethnographic Park. There is also an auditorium, cafeteria and an ecological souvenir shop. Tourists can travel to the pyramids alone or take a guided tour of the area to learn about their history. Before the Spanish conquered the island it was populated by primitive people known as Guanche who allegedly built the pyramids to worship the sun.

La Laguna is Tenerife’s second most important city and until 1723 was the capital of the island, situated just inland from Santa Cruz in the beautiful countryside of the Aguere Valley. La Laguna is home to many of the most notorious landmarks such as the Catedral de Nuestra Señora de los Remedios (La Laguna’s Cathedral), Iglesia de Santo Domingo (the Saint Dominic Church) and Iglesia de Nuestra Señora de la Concepción (Church of Our Lady of Conception). Locals consider La Laguna as the cultural and religious capital, due to the fact that it is where San Fernando University and the Bishop’s Palace are located. For those looking for a bit of fun, bars, restaurants, the best action doesn’t get going till after midnight, remember this is Spain!

The highlight of this trip was to go underground and to visit this fascinating lava tube or cave, the largest one in Europe and the fifth largest in the world. The cave is located in the town of Icod de los Vinos and extends for more than 17 km (11 miles) and contains three different levels of passageways, each full of geomorphological phenomena such as lava pits and terraces.

Tenerife is known for its unique volcanic nature and its exceptional spring climate. An extraordinary oasis of landscapes, surrounded by crystal waters rich in marine life. This playa, Spanish word for beach, is a dream come true. For the adventurous and sports lovers, there is a myriad of activities offered here such as Flyboard, Windsurf, Scuba Diving and more all by the shores of the Atlantic Ocean. Playa del Duque is a new resort area on the Costa Adeje, with easy access to all surrounding areas. It has a more peaceful and private atmosphere than other resorts in Tenerife.

Corpus Christi, the Catholic holiday in honor of the “holy beard”, is celebrated on Thursday after Trinity Sunday. It is celebrated all over Tenerife in folklore music and parades, but the most beautiful fiesta can be seen in La Orotava. The most solemn act is the creation of carpets of natural flowers throughout the streets of the historic center. La Orotava’s flower carpets is a huge and incredible work of art created entirely using sand and soil from Teide National Park.