Top 10 Things To Do In Rome 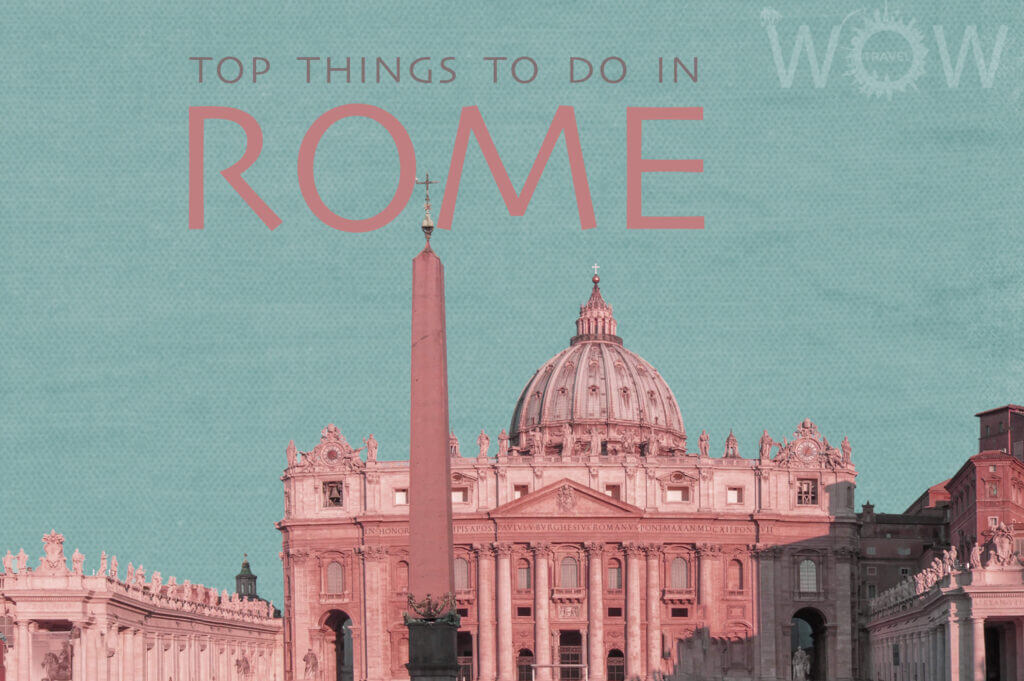 Rome is a popular travel destination in Italy and full of attractions. Today’s Rome is a vibrant and lively city with reminders of its past everywhere. You’ll encounter ancient Roman sites, medieval and Renaissance buildings and fountains, great museums, and beautiful squares. The city is a living museum of history from Roman times to present. It also boasts many fine restaurants, cafes, and good nightlife too. Although Rome is a huge city, its historic center is small, making it easy to walk. Here are our picks for the 10 essential attractions to round out your visit to Rome.
[booking_product_helper shortname=”rome”]

The Trevi Fountain is the most famous fountain in Rome, Italy. It is the largest Baroque fountain in the city and the maybe most beautiful in the world. A traditional legend holds that if visitors throw a coin into the fountain, they are ensured a return to Rome. The fountain is worldwide famous but many people do not know the history and the secrets hidden behind its construction. It is time to do justice to this extraordinary masterpiece of Italian art. We recommend staying at one of the 11 Best Hotels in Rome near this attraction.

In Ancient Rome, the Forum was the center of the Roman Empire. Until the 4th century AD, a thousand years of decisions affecting the future of Europe were made here. When Roman soldiers were out conquering the world in the name of the Emperors, temples, courts, markets, and government buildings were thriving in the Forum. Located between two of Rome’s famous hills, the Palatine and Capitoline Hills, it is now a collection of ruins having spent centuries as a quarry for marble and a cow paddock. Ongoing archaeological work continues, and getting a map or a guide can really bring the bustle of the ancient site to life. You can get a great view over the Forum from the overlooking hills in the Farnese Gardens and from Michelangelo’s Piazza del Campidoglio.

If you only have time for one art gallery in Rome, make it this one. The Galleria Borghese museum housing the ‘queen of all private art collections’, you’ll find Bernini sculptures including Apollo and Daphne and his take on young David preparing to take on Goliath. The impressive collection also includes works by master artists Correggio, Raphael, Rubens and Caravaggio. Please note that purchasing tickets will be your biggest challenge because the museum admits only 360 visitors every 2 hours so you’ll need to make reservations far in advance.

The Church of Sant’Ignazio Di Loyola was built in the 1600s in honor of Saint Ignatius, founder of the Society of Jesuit. It is a magnificent place of worship with an interior of stone, gilding, marble and stucco ornamentation. Here you will find the frescoes of Artist Andrea Pozzo during open hours. The interior of the Church of Sant’Ignazio Di Loyola is laid out in the shape of a Latin cross, a characteristic of churches during this time. Its structure includes a wide nave and apse, and the interior is Baroque in style. This church is also popular for its gorgeous paintings on the ceilings and has been reviewed as being more beautiful than the Sistine Chapel inside.

Piazza Navona is undeniably the most elegant and cheerful of all Roman piazzas, it was built on the site of Stadium of Domitian in the 1st Century AD. and still preserves its outline. The piazza remains a highly popular meeting place for Romans and tourists alike, who drowsily soak up the sun and atmosphere in open air bars dotted around it. Used in ancient times for various athletic games and competitions, although it never witnessed the carnage offered in the Colosseum, today tourists often enjoy sitting for street artists who, on request, in a few minutes either sketch a faithful portrait or draw a caricature of their models. The large and lively square features no less than three magnificent fountains.

Trastevere is a district in Rome and it’s the heart of Roman night life; rich in pubs, restaurants and clubs. The area has a high population of expatriates and American college students as there are two American universities in the area. Trastevere, which translates literally to “across the Tiber” was once considered the outskirts of Rome. Allowed to develop its own flavor and now part of il centro storico, it’s the perfect place to glimpse a bit of the old world while still enjoying the lifestyle of today’s Romans. Often described as Bohemian, homes bedecked with flower boxes and clinging ivy intertwine with coffee bars, restaurants, and one-of-a-kind boutiques. Buildings in terracotta, maize, and wine cast a glow, like a day-long sunset. From the cobblestone streets to the overhanging laundry lines, senses are pleasantly awakened with every step. Some of the Top 11 Gay Friendly Hotels in Rome are located around here.

Designed by Giuseppe Sacconi at the end of 19th century, is a monument to honor Victor Emmanuel II, the first king of a unified Italy. It was inaugurated in 1911 and completed in 1935. The colossal white marble structure has a huge equestrian sculpture of Victor Emmanuel II and two statues of the goddess Victoria riding on quadrigas. It also features majestic stairways, tall Corinthian columns and fountains. The monument contains the tomb of the First World War’s unknown soldier; a museum of Italian Reunification; and a cafe. You can get nice views of Rome from the structure for free, but for a fee, you can take a lift to the very top ‘The Terrace of the Quadrigas’ where you can enjoy stunning Panoramic views. Locals compare it to a wedding cake or a Victorian typewriter.

The Colosseum is one of the most visited tourist attractions in Rome. It is an ancient Roman amphitheater which was built between 70-80 AD. It could take up to 87,000 people in the audience, an audience that came here to see gladiator tournaments, fights between wild animals and executions. The Colosseum is 48 meters (158 ft) high and it is 524 meters (1720 ft) in circumference. Outside of the Colosseum, look out for the photo opportunity beneath the Arch of Constantine, which was built in 315 to commemorate the victory of Constantine over Marcus Aurelius Valerius Maxentius. To avoid lengthy lines, order tickets online ahead of time, they’re good for 2 consecutive days and include admission to the nearby Forum and Palatine Hill.

Open daily, the Pantheon is a 2000-year-old temple (now a church), and it’s the best preserved of ancient Rome’s great monuments. The Pantheon known for its perfect proportions, seeing as it was raised in 120 AD. While you’re there, you can also pay your respects to the artist Raphael, as well as Italian kings Victor Emmanuel II and Umberto I, who are all buried there. Recent visitors describe this free attraction as a must-see. The former pagan temple can be found in the Navona and Campo corner of Rome, accessible via the Barberini metro stop.

Whether you’re Catholic or not, it’s hard to argue with the fact that buy tickets online.

Just so you know: