Top 11 Things To Do In Ibiza 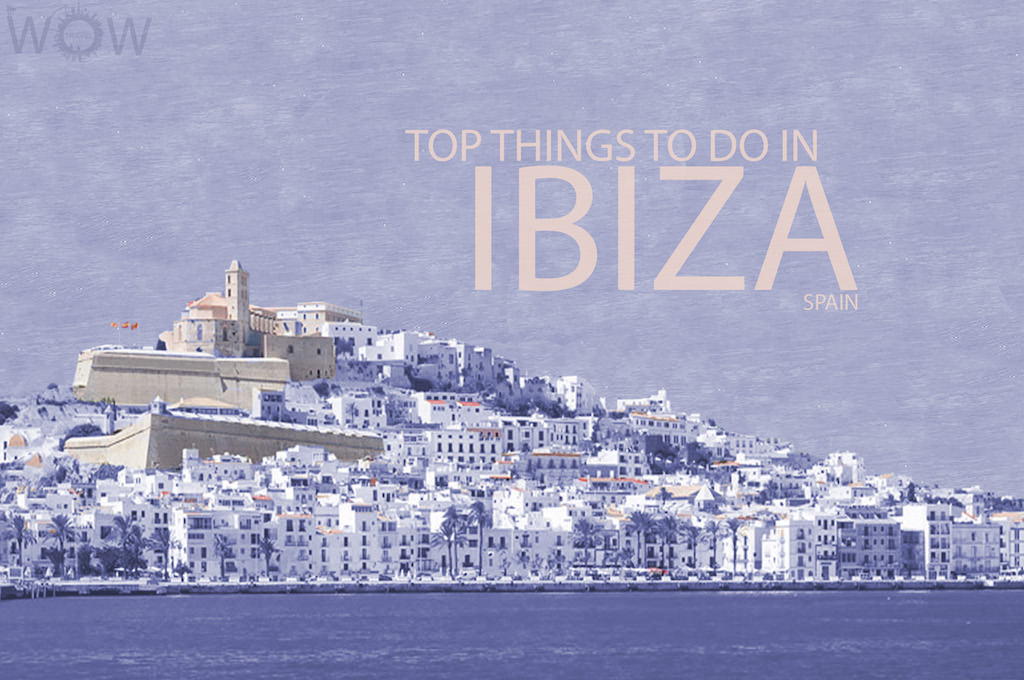 Although Ibiza has a reputation for being the party capital of the planet, host of the best nightlife in the world and home to the best super-clubs on the globe, the island owns as well an absolutely beautiful coastline with dozens of tiny coves to discover, crystal clear seas for snorkeling, hidden bays, pine forests, fascinating Spanish culture and quaint towns. Ibiza is roughly ten times the size of Manhattan, and in that area you will find a huge diversity of landscapes, activities and cultural curiosities to enjoy. Enjoy our list of the Top 10 Things To Do In Ibiza.

Standing at almost 400 meters (1312 ft) high, this uninhabited rock island made of limestone is situated 2 km (1.24 miles) off the west coast of Ibiza, in the Cala d’Hort area. One of it’ most discussed and famed myths are that the Es Vedra Rock is actually the tip of the immersed civilization of Atlantis. Whilst it’s exact location remains one of Ibiza’s most treasured secrets to this very day, the natural cave of Atlantis can be found by those prepared to take upon a challenging walk with no guided direction in the bay area opposite the rock. The Es Vedra rocks are said to be the third most magnetic place on Earth, the mixture and concentration of minerals within them being able to interfere with any magnetic equipment. An excellent spot to watch the famous rock of Es Vedra is from Cala d’Hort Beach.

There are more than 40 beautiful beaches you can choose from to get that perfect tan in Ibiza, each with different characteristics that appeal to the preferences of tourists. Benirras Beach, one of the most visited beaches in Ibiza, is not your typical beach, as it has grainy, rocky sand for its beachfront lapped by waves of clear, blue-green water. Cala d’en Serra, an oval-shaped beach on the north coast, is relatively small but is surrounded by imposing cliffs, cerulean waters and fine, golden sand. If you prefer naturist beaches, then Aguas Blancas might be the perfect beach to get that tan. Flanked by tall rocky cliffs, and littered with rocks and caves the adventurous can readily explore, the waters around Aguas Blancas are also fairly shallow, perfect for a morning swim or a round of snorkeling come late afternoon. Cala Compte is perfect for both family beach-goers and those looking to be a little more exhibitionist (on the east side). Source: themost10

Dance to the thrumming drums and bongos at the picturesque Benirras beach. Each Sunday is a night out where the party starts at sunset and continues till sunrise.

Dalt Vila, which literally means ‘High Town’, is the older and (predictably) higher half of Ibiza Town. A UNESCO World Heritage Site, it is where you will find some stunning examples of Ibiza’s history and culture – a story told in architecture, art and the various museums that can be found in the area. Inside the fortified walls you’ll also find shops, bars and restaurants, so take some time to wander around and enjoy the views across the Mediterranean offered from the bastions. Source: oliverstravels

The Natural Park of Ses Salines is a protected area located encompassing parts of South East Ibiza, the North of Formentera and the sea and islands in between. It covers an area of 16,000 hectares, of which 13,000 are marine. A wide variety of differing natural features can be found, from salt lakes and beaches to lunar cords with centuries-old ghost trees, cliffs, and rocky coastlines. Start at the end of Ses Salines beach and head toward Es Cavallet along the coastal road. On your trip, you will discover virgin beaches, pine forests, and the rock cliffs where part of the rocks used to construct the walls of Dalt Vila came from. Another great option is to follow the coast from Cala Compte to Cala Bassa, where you’ll discover small coves for enjoying a swim in clear blue waters.

For 35 years the Club Punta Arabi runs the biggest Hippy Market of the island of Ibiza, with over 500 stalls scattered throughout the streets. Every Wednesday Punta Arabí turns into a world full of color and music. That day when you open the door of your room, you will be transported into the 70’s, surrounded by handicrafts, clothing, footwear, jewelry, music and more.

There is nothing to compare to the superclubs of Ibiza. Frankly, the rest of the world is the runner-up. Privilege alone has a capacity of around 10,000 people, Pacha is the year-round club, and a favorite of the locals as well as the tourists, while Space invented the concept of the day-club, kicking off their parties when the other clubs are kicking you out of the door at sunrise. In Ibiza, you can literally party until you drop from exhaustion. And you wouldn’t be the first. Source: ibizaholidays

Take a boat to the island just off Ibiza called Formentera for awe-inspiring beaches and crystal clear water. I’ve never been to the Caribbean, but Formentera’s beaches must rival them. It takes about 30 minutes to an hour to travel to Formentera by boat, and is well worth the cost. However, if you take the time to shop around a little you can often get a good deal. Source: huffingtonpost

Ibiza port is beautiful and a very nice place to eat lunch, dinner or just go for a drink. It hosts some of the most magnificent yachts in the world and just for that is worth a walk around.

There is so much more to Ibiza than sea and party and with “Walking Ibiza“, a fully guided walking tour around the edge of the island, you will be exposed all of those tracks, coves, beaches, lush pine forests and hidden gems that you never even knew existed.

You don’t have to party hard to enjoy the atmosphere of Ibiza. Walk to the far end of San Antonio Bay and you will find the bar that started it all. The Café Del Mar. This was the inspiration for all the chill out music compilation CDs you can buy almost anywhere in the world. Enjoy it first hand sipping a cocktail on the water’s edge whilst the sun sets and ethereal music drifts from the bar. It’s a popular meeting place for young and old, some in readiness for their night at the clubs, others just to take in the atmosphere. Source: rhinocarhire