50 Most Colorful Places On Earth 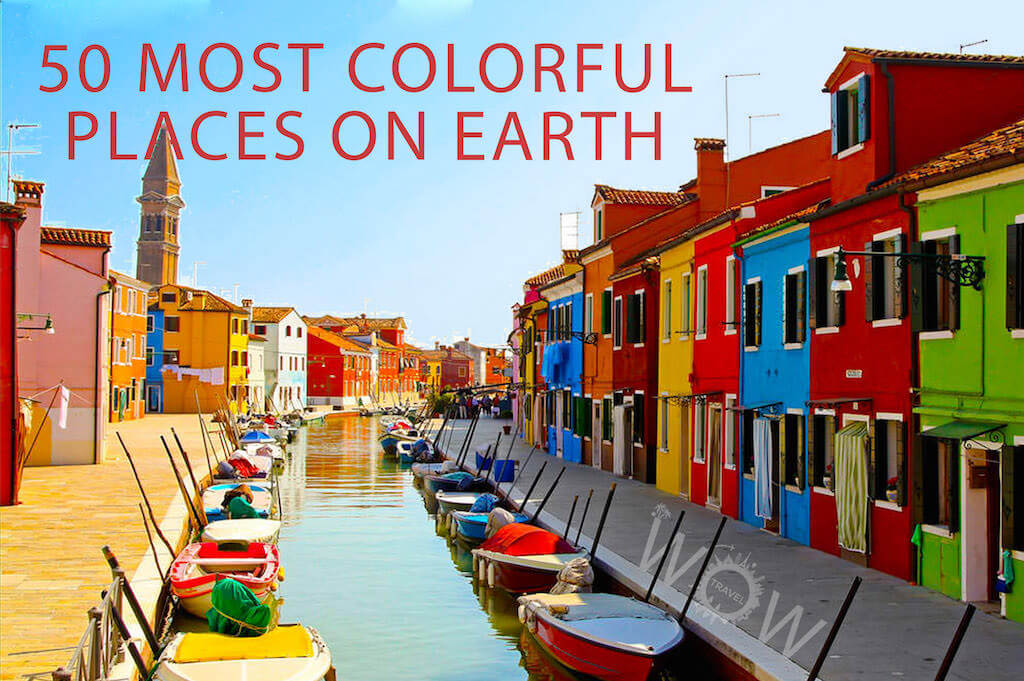 Join us on a journey through surreal and intensely colored landscapes and take a look at some of the strangest and most vibrant sights in the world. There is no Photoshop here, these color-drenched images are all one-of-a-kind feasts for the eyes and WOW Travel has witnessed many of them itself. Enjoy the 50 Most Colorful Places On Earth.

This serene neighborhood facing the Copenhagen harbor in Denmark is a popular area with both locals and tourists. The many bars and restaurants make it an ideal location to relax along the canal and enjoy life.

Located east of the Andes in Colombia, the Cano Cristales river bursts into vibrant colors for a few weeks between September and November because of an aquatic plant, called Macarenia clavigera.(Source: Wikimedia / Cano-Cristales.com)

The Bo-Kaap is an area in the city of Cape Town formerly known as the Malay Quarter. Bo-Kaap is traditionally a multicultural area, rich in history and situated on the slopes of Signal Hill. The area is known for its romantic cobblestoned streets and colorful houses. (Source: Flicker/Jeremy R)

This Venetian island is famous for two things: lace and its ridiculously colorful homes. (Source: Travelthee.com)

The Mexican city of Zacatecas was founded in 1548 to provide shelter to the silver miners and reached the height of its prosperity in the 16th and 17th centuries. The city is built on the slopes of a narrow valley with narrow streets climbing the steep hillsides. The old center contains many colorful buildings, most of them from the 18th century, including the beautiful Cathedral and the Church of Santo Domingo which has a richly sculpted facade. (Source: metrotravel.mx)

The striking colors of the flowering tulip bulbs are a typical sight in Holland during the spring. The bright red, pink and yellow colors are overwhelmingly beautiful and are a must-see, or should we say, a must experience! (Source: secondglobe.com)

A village in the Provence-Alpes-Côte d’Azur region in southeastern France. It is nicknamed “la perle de la France” which means ”The Pearl of France”. It has nice beaches and beautiful colorful homes.

Boats float on what looks like a giant strawberry milkshake lake. The vessels were bobbing on Lake Retba in Senegal, which turns a bizarre pinkish color due to bacteria and high levels of salt in the water. Just like the Dead Sea, swimmers can float on its surface. (Source: Mirror.co.uk)

Greenland seems to have plenty of colorful houses that brighten up the otherwise bleak landscape. Take a look at this tiny village called Kulusuk located on a small rocky island and it is the gateway to east Greenland (Source: Icelandtravel.is)

Known for its beautiful waterfalls, landscapes and meadows of endemic alpine flowers and the variety of flora. This richly diverse area is also home to rare and endangered animals, including the Asiatic Black Bear, Snow Leopard, Musk Deer, Brown Bear, Red Fox and Blue Sheep.

An azure temple created by nature, the walls of this network of water-filled marble caverns show just how magnificent the precious geography of our planet can be. (Source: The Strange Walker Blog)

The southern Spanish town was painted blue for the “Smurfs” movie in 2011. After visitor numbers ballooned to 80,000 people (from 300), residents voted to keep it that color once they saw the tourism draw.

Willemstad is the capital city of Curaçao, an island in the southern Caribbean Sea. This country is so colorful and unique that they have a language of their own called Papiamento.

The Grand Prismatic Spring in Yellowstone National Park. The vivid rings of color in Morning Glory Pool explained and its different shades are actually created by a bacteria in the water. The hot springs, which sometimes erupt as a geyser after earthquakes, was originally named Convolutus, Latin for morning glory, because of its resemblance to the flower. Unfortunately, because Morning Glory Pool is such a hot spot for tourists, pollution has been a major issue in recent years. (Source: The Weather Channel)

The Blue City of Jodhpur is a magnificent spectacle and an architectural masterpiece. Amidst all of these, lie some of the best hotels in Jodhpur.

A polish city located in western Poland. It has a population of over 630,000 making it the fourth largest city in Poland (Source: urbanpeek)

La Boca is a neighborhood in Buenos Aires, the home of world-famous football club Boca Juniors. It is a popular destination for tourists visiting Argentina with its colorful houses and pedestrian streets, the Caminitos. (Source: urbanpeek)

Crazily constructed fishing villages, set amid some of the most dramatic coastal scenery on the planet, ought to provide enough to bolster the most jaded of spirits. A Unesco World Heritage Site since 1997. (Source: 500pix/Peter Stewart)

The pristine water of Five-Flower Lake, is the pride of Jiuzhaigon National Park in China. The shallow lake glistens different shades of turquoise and its floor is littered with fallen ancient tree trunks. (Source: all-that-is-interesting.com)

A street with colorful houses near the ocean in St. John’s, Newfoundland. (Source: TheStar)

The colorful, diagonally striped houses of the Santa Marta Favela making it the most famous favela in Rio ​De Janeiro.

The first capital of Brazil has an exquisite historical center (often called Pelourinho) that has so strictly adhered to the original architecture that it is now a UNESCO World Heritage site.

The capital of Greenland is Nuuk which is also referred to by its Danish name Godthab. The subarctic climate in Nuuk results in temperatures of -30 C in winter and about 10 C in summer. Rainfall and snow are common at any time of the year. The city of Nuuk was established in 1728 and is often termed as the oldest city in Greenland. (Source Islands-tours)

Home to over 1500 species of fish and 600 types of coral, the reef is a getaway for native Australians as well as travelers looking for the ultimate diving experience. (Source: Freeopinionist)

Nestled in the mountains of the Sierra de Guanajuato in Mexico lies the beautiful colonial city of Guanajuato. The 16th-century mining boom led to the construction of beautiful haciendas and fine colonial buildings. (source: Flickr/Teseum)

Also known as the ‘Isle of Flowers‘, this French island in the Caribbean has just about everything in the way of visual pleasures: turquoise waters, white sandy beaches, exotic plants and animals and the jungle landscape of the volcanic Mont Pelée, which towers over the island. Martinique, once known as Madinina (Isle of flowers), is made up of tropical forests and savannas that are home to a wide variety of colorful flora. Some of the best hotels in Martinique exude this exact nuance. (Source: Flickr/Salim Shadid)

The colorful sight of the pond is a natural process of salt evaporation. Colors in salt ponds range from pale green to deep coral pink. Color inversion occurs due to the response of microorganisms to increasing salinity. Algae lives in low-salinity ponds, Dunaliella, contributes to blue-green color. As the salinity increase, green colors become lighter. In high-salinity pond, Dunaliella produces red pigment. The other significant microorganisms that give red color of the pond are halophilic bacteria such as Synechococcus. Orange colors occur because of millions of tiny brine shrimp in mid-salinity pond. Weather also affects the colors of the ponds. Heavy rain can dilute the brine, causing the colors to become lighter. (Source: Sivienna)

In one of the biggest wetlands in the world, the highly alkaline soil allows the bright red suaeda plants to flourish. (Source: imgur.com)

Santorini is the most popular island in Greece. It combines beautiful beaches, spectacular scenery, ancient cities, amazing restaurants, some of the world’s best wine, and an active volcano. (Source Flicker/Edward Dalmulder)

The massive Atlantis Paradise Island Resort and Casino brings a healthy dose of Vegas-style glitz to Paradise Island. There are nightlife and fine dining to appeal to grownups, but kids will enjoy the pools, beaches and all manner of water sports. Some of the 11 Best Hotels in The Bahamas are located here. (Source Flicker/David Kosmos Smith)

These lavender fields are just as fragrant as they are colorful. I can only imagine standing between the endless rows. (Source: farm4.staticflickr.com)

Haight-Ashbury is a district of San Francisco, California, named for the intersection of Haight and Ashbury streets. The neighborhood is known for its history of hippie subculture. (Source: Wikimedia)

Gamla Stan, the Old Town, is one of the largest and best-preserved medieval city centers in Europe, and one of the foremost attractions in Stockholm. There are about 3000 people living in the old city today. Most buildings are from the 1700 and 1800 century. The old town has the biggest ranges of restaurants, tourist shops, studios and museums in Stockholm. (Source Flicker/Guillén Pérez)

The stalagmites and stalactites of the Reed Flute Cave in Guilin, China, are lit up in an array of colors. The cave is over 180 million years old. The Reed Flute Cave has been popular with tourists for a long time, as far back as the Tang Dynasty – some 1300 years ago – poets and other visitors wrote inscriptions on the cave walls, which can be seen today! (Source: Flicker/Bernt Rostad)

Alberta is undoubtedly one of the most beautiful places on earth, as vast as it is varied in colorful landscapes and experiences. Situated in the heart of western Canada, Alberta is bordered on the west by the majestic Canadian Rocky Mountains.  (Source: Flicker/Chung Hu)

Barranco is one of 43 districts in Lima, Peru. (Source: Bugbog.com)

Luoping lies in the eastern part of the province. Luoping is dominated by karst features with small basins among mountain ranges. Luoping has now been made famous by the fantastic photos shot by modern day photographers and tourists. (Source: China Tour Advisors)

According to LP “Naples is Italy’s third largest city is one of its oldest, most artistic and most delicious. Its centro storico (historic center) is a UNESCO World Heritage Site, its museums boast some of Europe’s finest archaeology and art and its swag of royal palaces and castles make Rome look positively provincial.” (Source: Travel Brochures)

Chefchaouen or Chaouen is a city in northwest Morocco. It is the chief town of the province of the same name and is noted for its buildings in shades of blue. Jewish refugees painted this mountain-side town blue in the 1930s and now the city has beautiful blue and white buildings to show for it. (Source: Gallivantgirl)

Longyearbyen is the largest populated area on the territory of Svalbard, located in the high Norwegian Arctic.  (Source: Flicker/Mike Thomson)

We are surrounded by a blaze of flaming colors in this our beautiful home called planet Earth. Multicolor lush gardens in Europe, orange barren deserts in Northern Chile, green wilderness in the Peruvian Amazon,  grey cloudy skies in London. Hundreds of places are waiting for you to come visit. Let us, WOW Travel take you there.