Top 10 Things To Do In Naples 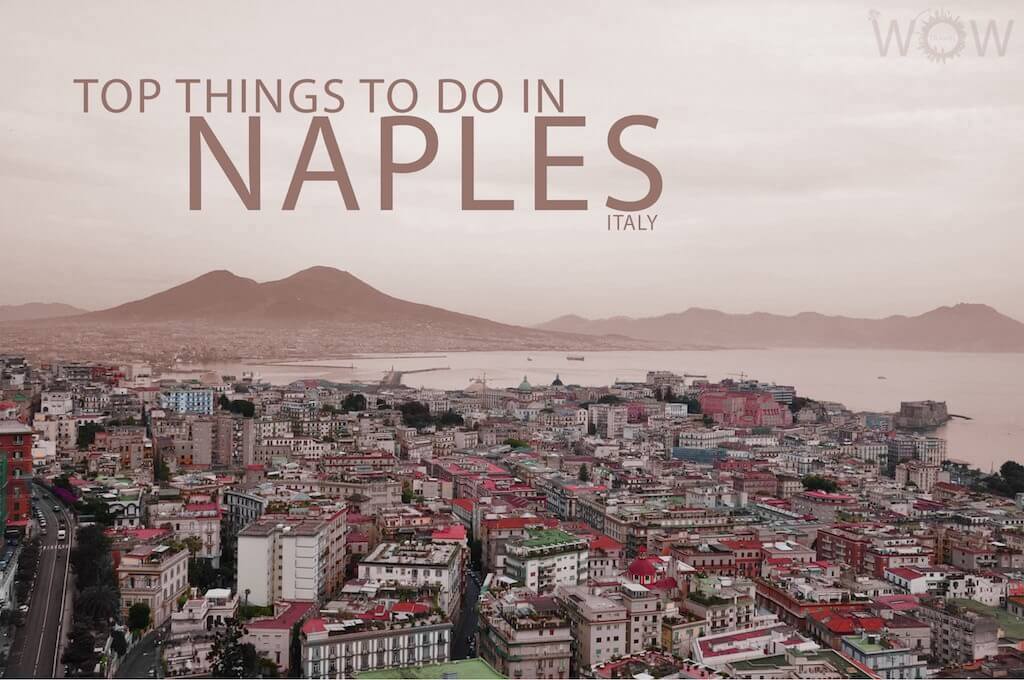 Naples, Italy’s 3rd largest city after Rome and Milan, has a history that stretches back to the Bronze Age, making it one of the oldest continuously inhabited places on earth. Waves of invaders once ruled this city and it still bears witness to Greek, Roman, and Spanish influence in its historical city center, one of the biggest in the world and a UNESCO World Heritage Site. Naples is considered Italy’s Most Vibrant City and has always been a city full of life, energy, art and inner power. It allows you to experience a real Italian city filled with the rich traditions, flavors and scents of yesterday. Check out our list of the Top 10 Things To Do In Naples. You will love it.

“Naples is a unique hybrid, at times reminding me of a Moroccan souk, with its dark warrens of crowded streets, and even a bit of what Manhattan looked like before the big clean up in the 1980s.” – Marjorie Eisenach

Via San Gregorio Armeno is a narrow cobblestoned alley in Naples Historic District, the Centro Storico, known by most English speakers as Naples Christmas Alley. It is here, where you’ll find Naples famed presepi, the Neapolitan nativity scenes: finely crafted figurines in terracotta and wood and hand made cribs (the mangers). There are also mass-produced sets and pieces for those on a budget as well as plenty of Christmas kitsch and other traditional Neapolitan crafts like the famed Pulcinella and the Tammorra Napoletana – the Neapolitan Tambourine. Via dei Tribunali, another street in old Naples, has arcades dating back more than 1000 years. Source: napoliunplugged

The Cathedral of Naples was built at the end of the 13th century at the decree of Charles I of Angiò. It is perhaps best known for the fact that it houses the vial containing the blood of Saint Januarius, once the Bishop of Naples and its patron saint.

Palazzo Reale is a beautifully preserved royal building with its gold ceilings and opulent furniture. This palace was built in the 1600s, its decorative style is reminiscent of ancient Roman buildings, with its granite columns, Latin inscriptions, Doric, Ionic and Corinthian pediments and pilaster strips. The inside of the palace is laid out around the square courtyard of honor, which in turn is surrounded by a colonnade of Piperno stone arches. To the north lies the picturesque garden designed by the botanist Denhart in 1841 and built during the major restoration works that the Palace underwent in the 19th century. The Royal Palace was the seat of the monarchy in Naples and Southern Italy for three centuries, from 1600 to 1946 but housed the Museum of the State Apartments and the National Library since 1919. It as thus taken on a different cultural role in city life. Source: veltra

On the slope of Capodimonte near the majestic Church of Buon Consiglio lies an underworld created for the dead. The Catacombs of San Gennaro began in the second century AD as a pagan burial ground and later adopted by Christians as an underground burial sites. The Catacombs of San Gennaro are the most important catacombs in southern Italy due to the length of their use as a burial site and the well-preserved mosaics.

Known for its perfect acoustics, the Teatro di San Carlo is the oldest opera house still active in Europe and it is recognized as a UNESCO World Heritage site. The theater designed by the architects Giovanni Antonio Medrano and Angelo Carasale for the Bourbon monarch Charles III of Naples.

The finest of the many castles of Naples, this impressive 15th century building stands on the site of a 6th century BץC Greek colony, and later a Roman fortress. Today the castle is best know as a sightseeing destination, a place to hold events, and of course a romantic backdrop for taking photographs.

The Funicular (inclined railways) in Naples is one of the longest funicular lines in the world, and with over 10 million passengers carried annually. The Funiculare take you up the hill to the Vomero district where you will find fabulous views, Castel Sant’Elmo, and Certosa and Museum of San Martino. Funiculare Centrale, one of the longest in the world, leaves from Via Toledo by Galleria Umberto. The other two are Funiculare di Chiaia and Funiculare di Montesanto. From the top you can view the straight and narrow main street that traverses the old, historic center of the city of Naples. The name of this street is Spaccanapoli, it means “Naples splitter”. This street dates back to the ancient Greek and Roman city, and today it is one of the most lively and distinctly Neapolitan streets in the historic center.

Take a day-trip to explore the ruins of Pompeii and Herculaneum, two of Italy’s most popular tourist sights. Pompeii was a resort town with imposing temples, a beautiful forum, a perfectly built theater and a stadium. It was inhabited by wealthy Romans who were known for lavish spending on their homes. In 79 A.D the eruption of Mount Vesuvius, one of the most catastrophic and infamous volcanic eruptions in European history, buried the ancient Roman city of Pompeii under a thick carpet of volcanic ash. All the people in the 700-year-old town of 20,000 could have escaped, but no one recognized the inherent danger of the mountain’s warnings. Nearby Herculaneum has the same story, though some say it is the more interesting site due to its smaller size and the fact that more of the artifacts remained in place.

Castel Nuovo, also known as Maschio Angioino, is a medieval castle located in front of Piazza Municipio. This imposing castle, surrounded by deep moats, was built in 1282 by Pierre de Chaulnes and Pierre d’Angincourt, the architects of Charles I of Anjou. It was modelled on the castle at Angers. A remarkable triumphal arc embellishes the entrances on the town side.

40 meters (130 ft) below the characteristic and lively streets there are plenty of tunnels, caves and ravines. It is called “Napoli Sotterranea” (Naples Underground). It is the most famous and fascinating guided tour underneath the city of Naples with catacombs and aqueducts visible in places. Guides will take you on a journey through 2,400 years of history, from the ancient Greeks to modern times, unveiling the “womb” of Naples from an archaeological, historical, anthropological and geological point of view.