Top 10 Things To Do In Milan 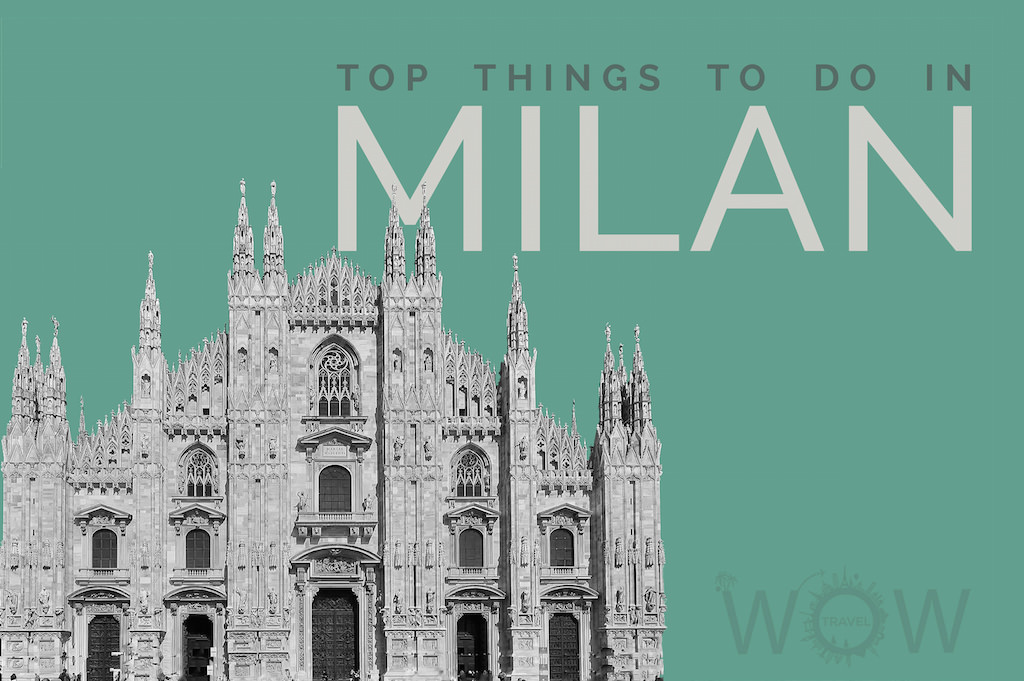 Milan or Milano as the Italians calls it is not only the second-largest city in Italy but the most important one financially speaking. We visited Milan last year, not our first time of course, and we also admire how Milan is Italy’s most modern city but it manages to keep most of its historical past intact. International Fashion houses have their headquarters in this lavish metropolis such as Valentino, Gucci, Versace, Prada, Armani and Dolce & Gabbana. Milano is also home to world-famous soccer teams like Inter Milan or AC Milan. Milan means good fashion, good food and great nightlife, what more could you possibly want from a city? Milan is the type of city that is good to visit all year round. The following are just some of our favorite spots and tips for you. Enjoy WOW Travel’s Top 10 Things To Do In Milan.

Basilica di Sant’Ambrogio (Also known as Basilica of St. Ambrose) in Milan was consecrated by St. Ambrose in 387 AD. Rebuilt in the 11th century, It is one of the oldest churches in the city and one of the finest examples of Romanesque architecture in Italy. It became the model for all Lombard Romanesque churches.

Completed in 1877 (designed by Giuseppe Mengoni) at the hub of Milan’s political and social life. Galleria Vittorio Emanuele II is one of the oldest enclosed shopping malls in the world, housed in a magnificent glass-covered 19th-century arcade with charming boutiques, luxury clothing stores that include Gucci, Tod’s, and Louis Vuitton & upscale dining. If you want to shop in the most special place in Milan, it’s off to the Galleria Vittorio Emanuele II you go to.

Built in the 14th century by Francesco Sforza, Duke of Milan. Sforza Castle is a huge Medieval-Renaissance fortress. It was one of the largest citadels in Europe. Largely remade by Luca Beltrami in 1891-1905, it now houses several of the city’s historical museums and art collections by da Vinci and Michelangelo.

Navigli canals were dug out in the Middle Ages to facilitate irrigation and create cheap waterways to deliver to the city raw materials and goods. The Naviglio Grande or Grand Canal represents Milan’s first and most important hydraulic work and soon became a waterway as its navigation system was improved by the genius Leonardo da Vinci. The neighborhood around Navigli Lombardi is today one of the most popular, filled with cafés, bars and small shops. Don’t forget to take the 1 hour cruise along the remaining Navigli Lombardi.

Built between 1466 and 1490 by renowned Renaissance architect Donato Bramate, Santa Maria delle Grazie Church is a UNESCO World Heritage Listed building and a work of art in its own right. Santa Maria delle Grazie is home to one of the most striking monuments of Lombard Renaissance  and the most famous artifact: ‘The Last Supper’ by Leonardo da Vinci. This famous mural depicts the scene of Jesus’s last supper when Christ tells his apostles that one of them will betray him.

Milan natives pride their city for being known as the fashion capital of the world so visiting Quadrilatero d’Oro (the rectangle of gold) will not disappoint you. It is Milan’s most exclusive shopping district and one of the world’s most important centers for fashion in the world. Quadrilatero d’Oro is bound by 4 main streets: Via Montenapoleone (the most famous street), Via Manzoni (home to the Grand Hotel et de Milan), Via del Corso and Via Senato – and traversed by a few more boutique-laden thoroughfares such as Via Sant’Andrea (with Chanel, Armani, Moschino, Fendi and Hermès), Via della Spiga (with Bulgari, Krizia, Sergio Rossi, D&G and Prada).

Not so far from Milan’s Piazza del Duomo we find the Piazza Mercanti, also known as “Merchants Square”. This picturesque square was the beating heart of the commercial and governmental life of the 13th century. Nowadays, it is filled with amazing architecture and great historic significance, but slightly fewer crowds. Some of the most important historic buildings facing the square are: the Casa dei Panigarola (15th century, the see of the notaries), the Loggia degli Osii (14th century, with the balcony where the edicts were read out to the citizens), the Scuole Palatine (17th century) and the Palazzo dei Giureconsulti (16th century), Palazzo della Ragione or Broletto (12th century, former seet of the City Council).

Teatro alla Scala, or La Scala, is the cultural heart of Milan and perhaps one of the world’s most famous opera houses. it is famous for Italian opera & ballets, with a museum & music library. The initial structure of the Teatro alla Scala got destroyed in a devastating fire. However, the new theater was soon constructed in the previous setting of the Santa Maria della Scala Church. It was designed by the neoclassical architect Giuseppe Piermarini and opened in 1778.

It took half a millennium to build, and it all began in 1368. One of the world’s largest Catholic Churches, the Milan Cathedral, is the most breathtaking landmark in the city. The cathedral building stretches for 158 meter (520 ft) in length and the tallest spire is more than 91 meter (300 ft) high, it is so massive (can hold 40,000 people) it is almost impossible to conceive its proportions. When you go in, it only gets better, the light that comes through the stained glass window is inspiring. By the way, don’t miss a visit to the roof, take the elevator or stairs and enjoy incredible panoramic views over the whole city.

Home to Milan’s two best football teams, AC Milan and FC Milan. The imposing San Siro Stadium (also known as the Stadio Giuseppe Meazza) is a must visit if you are a fan of the game. There is also a museum that tells the history of both clubs with memorabilia including cups, medals and shirts. If you’re lucky enough to be in town when AC Milan is playing at home, definitely get a ticket to a game, the atmosphere in the stadium is incredible.