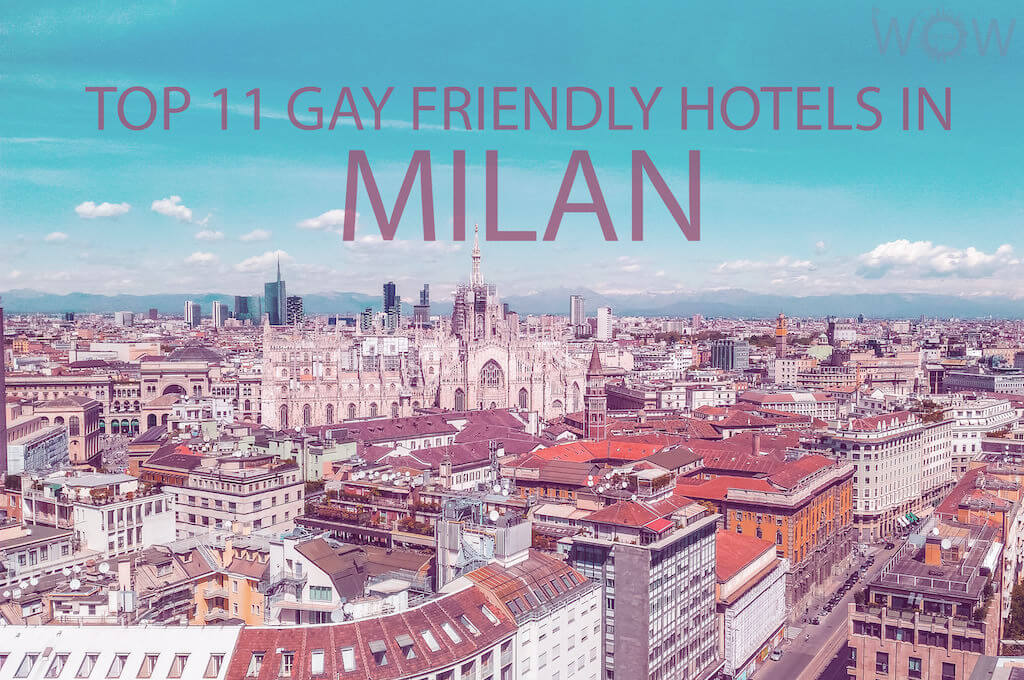 One of the world’s top fashion capitals, Milan in Italy, also happens to be one of the friendliest cities for gays in the world. Milan’s gay friendliness has led to the presence of some amazing gay friendly hotels and B&Bs in the city. Most of them are close to Porta Venezia, one of Milan’s most historical gates and popular with gay travelers. Porta Venezia is close to Via Lecco, the heart of the gay area in Milan. This is where most of the gay hotels in Milan are. It is also here that people throng the street during Pride Week, making the area the “Pride Square”.

Unlike the rest of Italy, Milano is fashion-forward, avant-garde, and unabashedly gay! The city has a thriving local gay scene, celebrating Pride Week and the Milano Pride. It also celebrates the extremely popular Milan Gay and Lesbian Film Festival in May. The gay scene in Milan isn’t limited to just this. Milan is Italy’s queer capital – it is home to some of the wildest gay parties in Europe!

In fact, in 2020, Milan will host the 37th edition of the Global Convention of IGLTA (International Association of Gay and Lesbian Tourism). The festival is a symbol of the maturity and commitment which Milan shows in the fight for human rights.

So, while Italy might be behind on its LGBT rights, Milan definitely isn’t. Exclusively gay hotels in Milan are rare, but any gay friendly hotel close to Via Lecco will have LGBTQ guests. Also, it’s a great way to crash after partying at the many gay bars in the area! If you’re gay and traveling to this gorgeous Italian city, here are the top 11 gay friendly hotels in Milan. Find out which one of these are our 11 Best Hotels in Milan!

Two gorgeous 20th-century villas tucked away off the main shopping street of Via Vitruvio make up the lovely gay friendly Hotel Charly. Peace and quiet reign in this affordable yet chic hotel, which features classic-vintage style furniture in the rooms with all modern comforts. There’s even a quaint courtyard with gardens making for a laidback vibe in the heart of Milan.

Cultural gay travelers to the city staying at Charly can also squeeze in a quick tour of the stunning Milan Cathedral, which is just a stone’s throw away. The gay scene of Milan isn’t far away either. The popular gay bars at Porta Venezia such as Leccomilano, Illumined, and the transgressive-friendly Inferus are hardly a 10-minute walk. The gay friendly Metro Club Milano sauna is a 15-minute walk from Hotel Charly. If you love to dance and party, head to the gay dance nightclub La Boum 15 minutes away, which has some amazing music playing!

Just down the street from the hotel is the Via Lecco, the heart of Milan’s gay quarter and the nucleus of Milan’s pride parade and Pride Week. A 2-minute walk gets you to Memà Sicilian bar, the very reference point for gay nightlife in Milan. The bar sees the whos-who of the Milan Fashion World congregate here for an aperitif, and is a great place for meeting fellow gays. For a night of glamour, we recommend the gay friendly Blanco, a 10-minute walk from Sanpi.

A five-minute walk from Milan’s Central Station brings us to the truly gay friendly Hotel Garda. This hotel is a real budget gem amongst the sea of accommodation choices in the area. Modernity blends effusively with old-fashioned family spirit in this vibrant hotel, which features some eye-catching artwork and basic but modern rooms. The hotel clearly underlines its gay friendly policy, unlike many other Milan hotels, which is something that we liked.

Hotel Garda does great location-wise as well. Soak in some culture by indulging in this extremely interesting 1.5-hour walking tour of Milan’s modern district, the pickup point for which is just 10 minutes away. Milan’s gay scene begins from just down the street in the form of the highly popular gay bar Illumined. Leccomilano is a 10-minute walk in the direction of Porta Venezia, while the gay sauna of Metro Club Milano is 10 minutes in the other direction.

Gay travelers looking for an adults-only gay friendly hotel close to the gay neighborhood in Milan will love the B&B Too Cute 2be Strt8. Nestled on a tree-lined boulevard in the Lambrate neighborhood, Too Cute 2be Str8 is stylish, modern gay friendly communal living in the heart of Milan. Rooms are minimalistic yet tastefully furnished with wooden furniture and feature spectacular views of the sea. What’s more, the staff are extremely welcoming and even give you tips and information about gay life in the city.

Too Cute 2be Str8 has easy access to Milan’s vibrant gay scene. The gay friendly Royal Hammam Sauna is a 10-minute walk. A tram stop right out front and a 10-minute ride bring gay travelers to Via Lecco, Milan’s vitalizing gay quarter with all the popular gay cruising bars and clubs.

Gays who love culture will love Spadari, which is perfect for exploring Milan’s historic attractions. We highly recommend the 3-hour tour of Duomo Cathedral and La Scala Opera House, which is a great way to delve into Milan’s history. History lovers will particularly love the engaging 3-hour walking tour of the little-known secrets of Ancient Roman Milan. Do you love fragrances and scents? We think this hour-long Italian Perfume Workshop just five minutes from Spadari is perfect for you.

Hotel Spadari itself makes for a great stay, complete with modern, up-to-date, and spacious rooms and a delectable breakfast included. The gay friendly Milan hotel has a bar, where you can start your evening with a drink before proceeding to gay neighborhood in Milan near Via Lecco, a mere 10-15-minute tram/subway ride away.

Modern, spacious rooms make for a comfortable stay at the Hotel Berna, and the staff has tons of knowledge of gay Milan. In fact, the gay scene Milan literally begins steps from Hotel Berna in the form of the extremely popular gay bar Illumined, a minute’s walk away. Grab a cocktail here and then head to the popular traditional gay cruising bar Afterline 10 minutes away.

Not only is admission at Afterline free, but the place also allows for booking private rooms for an hour. The atmosphere is as it is diverse, and its a great place to meet fellow gays, both younger and older. For a laidback scene, the gay sauna of Metro Club Milano sits just next to Afterline.

Gay travelers who appreciate the good living on a holiday to Milan will love the gay friendly designer Hotel Straf. The designer hotel lies centrally right next to the Duomo Cathedral in the heart of Milan. Modern artwork and designer furniture dot the upmarket hotel. Rooms are modern minimalistic, with some even featuring sitting areas and massage chairs for a romantic sojourn.

For a fantastic yet different gay night out in Milan, ExecutiveG at the Quantic showcases some amazing, vibrant drag queen shoes every Thursday. What’s more, it’s a mere six-minute walk from the Hotel Straf. Are you into good indie and pop music and dance? The Glitter Club, a 10-minute walk from the hotel, hosts an extremely popular LGBT night on Saturdays, complete with fun drag shows. Even the many gay bars at Via Lecco are just a 10-minute subway ride away.

Those looking for a romantic hotel in Milan needn’t look too far. The beautiful, five-star Château Monfort five minutes from Porta Venezia is perfect. The upscale hotel is akin to an urban enchanted castle; and is a fairytale-come-true for gays looking for a luxurious, romantic stay in Milan. Rooms are 21st-century modern, with decor inspired from fairytales. Gay couples staying at Château Monfort can work out in the small, intimate gym and later on, luxuriate in Monfort’s wonderful spa.

For a wonderful gay experience out on the streets of Milan, the gay nightclub Toilet Club 20 minutes away is a great place to start. The gay bars at Via Lecco are a 10-minute tram ride away, and the gay sauna Metro Club Milano is five minutes further. Milan’s fashionable, glittering shopping district featuring one of the world’s best shopping streets Via Monte Napoleone is a 15-minute walk from Château Monfort.

Luxury goes eco-friendly at the futuristic Hotel VIU Milan, whose most defining feature is its wraparound vertical green forest. The high-end rooms are the very epitome of luxury, with elegant, modern decor, oakwood floors, and polished, spacious bathrooms. Private terraces provide birds-eye views of the city. A spectacular 360° degree rooftop pool is perfect to enjoy a swim with your partner.

Hotel VIU Milan also enjoys a fantastic location for enjoying the sounds and sights of Milan. The Duomo Cathedral, one of the world’s most extraordinary churches, and the amazing Italian opera and ballet house of La Scala are just a short tram ride away. The gay scene of Milan at Via Lecco is a 20-minute tram ride from the hotel.

The budget-friendly group Room Mate brings to Milan the unique, gay friendly Room Mate Giulia. The classic hotel lies in the very cultural heart of Milan. Travelers to this hotel can choose from a smattering of futuristic, climate-controlled rooms with city views and modern comforts. LGBT couples can have a romantic day at the hotel by indulging in a Turkish steam bath and massage that the property offers.

Gay fashionistas can walk for 10 minutes and find themselves in the heart of Milan’s Fashion District. The gay bars of Mono, Leccomilano, Illumined, and the gay sauna of Metro Club Milano are all a short tram ride away. The spectacular Glitter Club is just a 10-minute walk in the opposite direction. Also, some of Milan’s best attractions such as the Duomo Cathedral, La Scala, and the Royal Palace are right next door.

Close to the gay bars of Leccomilano and Blanco lies the Starhotels Ritz, a great gay friendly hotel in Milan’s gay quarter. Featuring its own sauna with a Finnish shower and Turkish bath, Starhotels Ritz is fantastic for a gay couple. The four-star property features cozy, contemporary rooms with modern comforts, but is affordable at the same time.

Since it’s located right in the gay quarter, gay travelers can hop between the slew of gay cruising bars around. These include the amazing Memà Sicilian bar, Mono, and Illumined, a 10-minute walk away. Staying at Starhotels Ritz is also a great idea for a solo gay traveler. These gay bars are excellent places to meet the local as well as the traveling LGTBQ public. Also, Porta Venezia with its excellent tram connections to all of Milan’s attractions is just an 8-minute walk.

Get Some Culture in Milan: