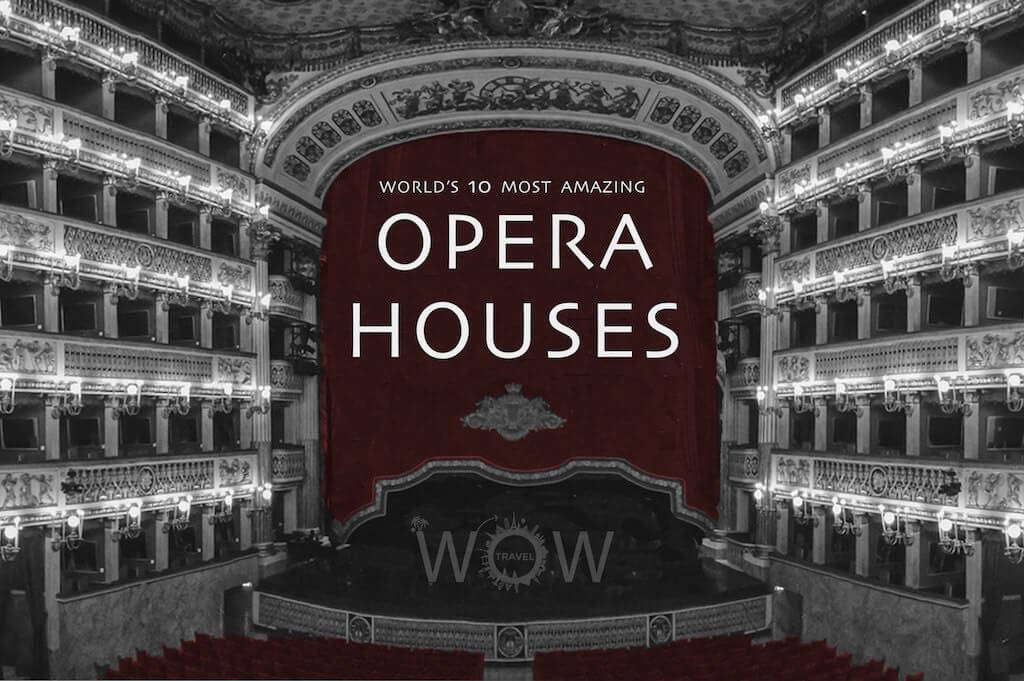 The Opera House is a plush, gilded palace where grandiose spectacles requiring vast spaces and great heights could be performed where the social elite gathers to watch in comfort and elegance wonderful performances. There are only a few opera houses without a “royal box”, since they were used not only to establish the ruling class in the eyes of the people, but also as the centerpiece for honoring fellow monarchs and heads of state with appropriate pomp and ceremony. The most talented architects and designers created these grand theaters, where ostentation was the order of the day and no expense was spared (Source: Midwest Book Review). The Opera House is one of the most important cultural institutions, that every city is proud of having. Join us to a journey with World’s 10 Most Amazing Opera Houses. From the Palais Garnier in Paris and Covent Garden in London to La Scala in Italy and the Bolshoi in Russia.

The Bolshoi Theatre is one of the greatest and oldest ballet and opera companies in the world and a symbol of Russia for all time. It is the main temple of Russia’s culture and was opened on 20 October 1856, on Tsar Alexander II’s coronation day. It was awarded this honor due to the major contribution it made to the history of the Russian performing arts. The Bolshoi recently re-opened in October 2011 after being closed for a 6-year renovation project. (You may also like the Top 11 Things To Do In Moscow)

The Teatro di San Carlo is the oldest still active in Europe and it is recognized as a UNESCO World Heritage site. The theatre designed by the architects Giovanni Antonio Medrano and Angelo Carasale for the Bourbon monarch Charles III of Naples (Carlo III in Italian) and it is one of the most renowned attractions in Naples, Italy.

Part of the Lincoln Center for the Performing Arts, the theater opened in 1966. It replaced the former Metropolitan Opera House opened in 1883 and located at Broadway and 39th St. and is the home of the Metropolitan Opera. At nearly 4,000 seats, it is the largest purpose-built opera house in the world. The Metropolitan Opera is a vibrant home for the most creative and talented singers, conductors, composers, musicians, stage directors, designers, visual artists, choreographers, and dancers from around the world. (You may also like the Top 25 Things To Do In New York City)

Guangzhou Opera House a newly constructed Chinese opera house. It is located in the center of CBD in Guangzhou, which is one of China’s national core cities. It was named “The world’s most spectacular theatres” (The Telegraph) and as a cultural city icon, GOH contribute to strengthening the cultural content for canton area and the reform for cultural system in China by presenting performing arts of much diversity. Designed by Zaha Hadid, the first female winner of the Pritzker Architecture Prize, the Iraq British women, GOH whose unique exterior is full of imagination, is inspired by the idea of two rocks washed by the Pearl River. Her acoustic systems are designed by Sir. Harold Marshall, the world top acoustic designer who achieves the world first-class level acoustic system and delivers a perfect visual and sound effects for the opera house. So far, GOH has been highly appreciated by the architecture tycoons and artists from all over the world and has already won numerous awards for China.

Since 1908, The Teatro Colón is the main opera house in Buenos Aires, Argentina. (You may also like the Top 10 Things To Do In Buenos Aires)

The Palais Garnier is a 19th-century architectural masterpiece and a 1,979-seat opera house, which was built from 1861 to 1875 for the Paris Opera by architect Charles Garnier. It is one of the ‘most grandiose Italian-style theatres’ in the world. Palais Garnier still hosts performances staged by the Opera National de Paris, but it is open to visitors during the day. (You may also like the Top 15 Things To Do In Paris)

Teatro alla Scala, or La Scala, is the cultural heart of Milan and perhaps one of the world’s most famous opera houses. it is famous for Italian opera & ballets, with a museum & music library. The initial structure of the Teatro alla Scala got destroyed in a devastating fire. However, the new theater was soon constructed in the previous setting of the Santa Maria della Scala Church. It was designed by the neoclassical architect Giuseppe Piermarini and opened in 1778. We recommend staying at one of the 11 Best Hotels in Milan nearby. (You may also like the Top 10 Things To Do In Milan)

Today, the Vienna State Opera is considered one of the most important opera houses in the world; in particular, it is the house with the largest repertoire. The Vienna Opera, began in the early 18th century. Since then it has continuously produced performances every year. The building was opened in 1869, part of Franz Joseph’s expansion of Vienna which has left such a magnificent legacy of grand buildings in the city. There are guided tours, or, better still, attend one of the 300 performances held every year in an every changing program. (You may also like the Top 10 Things To Do In Vienna). We recommend staying at one of the 11 Best Hotels in Vienna near this attraction.