10 Most Extraordinary Churches Of The World 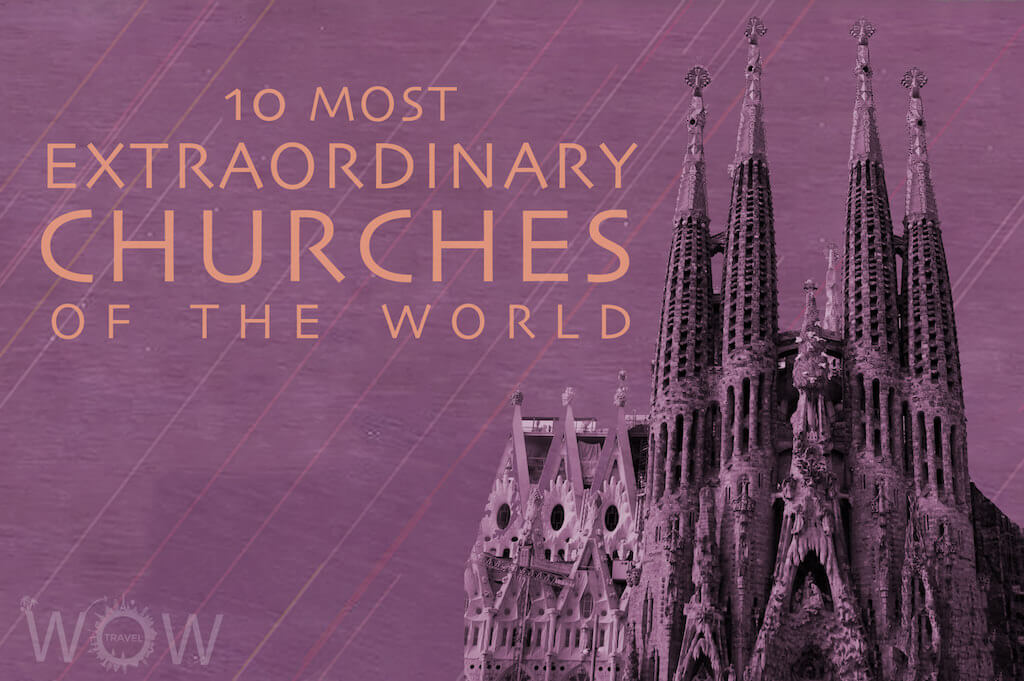 Although religion is playing a less prominent role in civilization nowadays, churches, cathedrals and basilicas still play a very important role in the landscapes of most cities around the world. Some of the most beautiful and inspiring creations in the world are churches, and regardless of our religious beliefs and affiliation, anyone can appreciate churches for their accomplishments in architecture. WOW Travel made a list of The 10 Most Extraordinary Churches Of The World.

It took half a millennium to build, and it all began in 1386. One of the world’s largest Catholic Churches, the Milan Cathedral, is the most breathtaking landmark in the city. The cathedral building stretches for 158 meters (520 ft) in length and the tallest spire is more than 91 meters (300 ft) high, it is so massive (can hold 40,000 people) it is almost impossible to conceive its proportions. When you go in, it only gets better, the light that comes through the stained glass window is inspiring. By the way, don’t miss a visit to the roof, take the elevator or stairs and enjoy incredible panoramic views over the whole city.

Hallgrimskirkja, ­the Church of Hallgrimur, ­is a national monument, dedicated to the most renowned sacred poet of Iceland, Hallgrimur Petursson. The parish is part of the Evangelical­ Lutheran Church of Iceland. Hallgrimskirkja towers over the center of Reykjavik, and its 73 meters (239 ft) ­high tower provides a wonderful view over all Reykjavik. Building work started in 1945 and the church was finally consecrated on 26 October 1986. The state architect, Gudjon Samuelsson (1887-­1950) designed the church. He drew richly on Icelandic traditions and materials. The concert organ was inaugurated in 1992. It was constructed by Johannes Klais Organworks in Bonn, Germany. Friends of the Arts of Hallgrimskirkja was founded in 1982 and has promoted rich and varied artistic events. A festival of sacred art is held every other year and the International organ summer is held every year. Source: safnabokin.is

The Jubilee Church (La Chiesa del Dio Padre Misericordioso), conceived as part of Pope John Paul II’s millennium initiative to rejuvenate parish life within Italy, is located outside central Rome. The triangular site is articulated three ways: first, dividing the sacred realm to the south, where the nave is located, from the secular precinct to the north; second, separating the approach on foot from the housing situated in the east; and third, again separating the approach on foot, from the parking lot situated to the west. Source: archdaily

The most famous landmarks in Russia, the St. Basil’s Cathedral, standing in the Red Square and was constructed from 1555 to 1560. It is for nearly 450 years now that this architectural ensemble of inimitable beauty and grandeur has been filling our hearts with joy, excitement and pride. It was commissioned by Ivan the Terrible in the 16th century to commemorate a military victory. The Legend tells that after it was completed, Ivan had the architect blinded in order to prevent him from building a more magnificent building for anyone else. In fact, he went on to build another cathedral in Vladimir.

The chapel of Notre Dame du Haut in Ronchamp, completed in 1954, is one of the finest examples of the architecture of Franco-Swiss architect Le Corbusier and one of the most important examples of twentieth-century religious architecture. The chapel is a working religious building and is under the guardianship of the private foundation Association de l’Oeuvre de Notre-Dame du Haut. Source: Wikipedia

The church of Stykkishólmur, Iceland was inaugurated May 6th, 1990. It is a landmark of the small town both from sea and land. The church is designed by architect Jón Haraldsson and the altar piece is painted by icelandic painter Kristín Gunnlaugsdóttir and shows Maria carrying the child Jesus. The church is well known for its fine acoustics and musical events are on regular basis. A new Klais church organ was inaugurated in January 2012 has 22 stops, commissioned from Johannes Klais of Bonn, Germany. Summer recitals are conducted by The Friends of the Arts Society Stykkishólmrkirkja every summer. Source: stykkisholmskirkja.is

The Cathedral of Brasília is the Roman Catholic cathedral serving Brasília, Brazil, and serves as the seat of the Archdiocese of Brasília. It was designed by Oscar Niemeyer, and was completed and dedicated on May 31, 1970. Source: Wikipedia

Whether you’re Catholic or not, it’s hard to argue with the fact that St. Peter’s Basilica in Rome is an amazing feat of architecture and art and one of the most beautiful buildings in Rome. It is the world’s largest Basilica of Christianity, nested into the heart of the Vatican city. The indigenous St Peter’s Basilica was constructed by will of Emperor Constantine around 320 AD. For about thousand years the Basilica grew and got enriched, but it was also theatre of pillage in the barbarian hordes. The cornerstone for this sanctified structure was laid on April 18, 1506.

The Chapel of the Holy Cross has been a compelling Sedona landmark since its completion in 1956. Designed by Marguerite Brunswig Staude, a pupil of Frank Lloyd Wright, the Chapel appears to rise out of the surrounding red rocks. The towering cross and awesome panorama of buttes, valley and sky are a source of inspiration inviting rest and reflection.