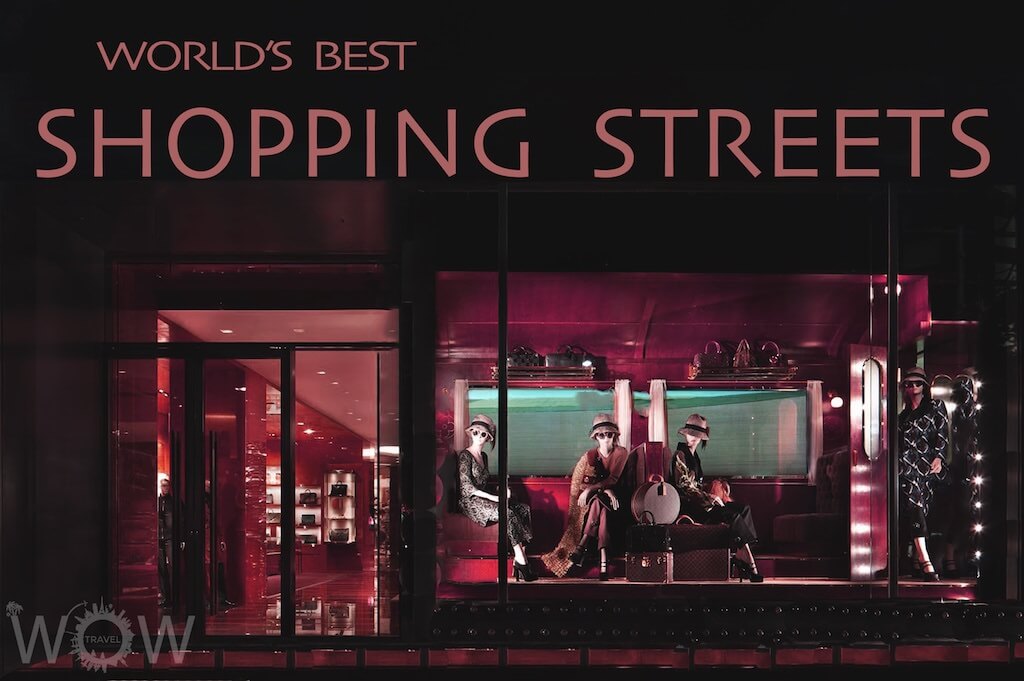 For those with bottomless purse and a cutting edge sense of style, these huge shopping avenues will be right their alley. From the Ginza in Tokyo to  New York’s Fifth Avenue, here are the World’s Best 9 Shopping Streets

The Ginza is Japan’s biggest luxury shopping and entertainment district, featuring numerous department stores, boutiques. Ginza has been Japan’s pinnacle of shopping class and opulence since the early 1900’s, typified in its grand, long-established department stores. For fashion brands, opening a location in Ginza is considered the ultimate status. Most of the shops in the area are flagship locations. Ginza is also of interest for its architecture, dining, tea rooms, art galleries, night clubs and cafes.

Extending from Piccadilly to Oxford Street with its wealth of elegant stores, Bond Street is home to the most elegant and expensive shops in London. From exclusive brands to luxury goods, fine jewels, art and antiques. Bond Street boasts one of the biggest and best concentrations of designer shops in the world, including Donna Karan, Prada, Louis Vuitton, Armani, Gucci, Versace, Chanel and Ralph Lauren. Quintessentially English style can be found at Mulberry and Burberry’s flagship stores.

Located in downtown Copenhagen, Strøget is the longest pedestrian street in Europe and Copenhagen’s largest shopping area. The pedestrian shopping street Strøget runs through the city center from Rådhuspladsen to Kongens Nytorv, It contains a series of interconnected streets and is lined with numerous boutiques, cafés, restaurants, kebab houses, tourist shops and entertaining street performers. Strøget is the city’s main shopping thoroughfare and it’s always busy and packed on Saturday.

Running from Bahnhofplatz outside the main train station all the way to the lake, the world-renowned Bahnhofstrasse boulevard is one of the most beautiful shopping streets in Europe. It is full of restaurants, souvenir shops, department stores, luxury shops and boutiques. Of course you can find the best Swiss delicacies here, such as chocolate (e.g. from Läderach). Also, there are several department stores such as the well known Swiss stores COOP, Manor and Globus. The list goes on with design shops, perfumeries and lots of jewelers and watch shops: Bucherer, Gübelin, Cartier, Omega, Swarovski and IWC Schaffhausen, just to name a few.

The City of Light is at the core of the world’s fashion industry, and the famed Avenue Montaigne, just off of the Champs-Élysées, holds a special place among luxury shoppers as a worldwide destination. For more than a century, avenue Montaigne has been an ultra-exclusive quarter, exuding hushed chic. In the second half of the 20th century, its image has been considerably embellished and transformed by the presence of high fashion institutions like Christian Dior, Dolce & Gabbana, Prada, Valentino, Chanel, Bulgari, Henry Winston, Salvatore Ferragamo and Calvin Klein.

The stretch of shops and boutiques on Rodeo Drive is only three blocks long but they constitute the most famous shopping district in America, and probably the most expensive three blocks of shops in the world. From world-renowned fashion houses to one-of-a-kind local boutiques. Experience world-famous Rodeo Drive where you’ll find Prada, Gucci, Valentino, Armani, Dior and Cartier. Discover the crown jewel in the heart of Beverly Hills, Two Rodeo Drive, a strip of boutiques modeled after European boutiques, with fountains, bistros and quaint cobblestone walkways leading you to the likes of Versace, Lanvin, Jimmy Choo and Tiffany.

Milano is considered by many to be the top fashion capital in the world and Via Monte Napoleone lies at the heart of the Quadrilatero della Moda, Milan’s fashion district. All of the top designers are here, together with less-exclusive ready-to-wear and jewelry shops. Many of the world’s top fashion brands also have their headquarters and offices on this street.

Calle Serrano is located in in the heart of Madrid’s wealthiest neighborhood Salamanca district, where you’ll find 11 Best Hotels in Salamanca. It is one of Europe‘s most expensive streets with luxury designer goods, runway-inspired high-street pieces, top international boutiques and the best porcelain homewares from leading Spanish brands.

For world-class shopping featuring some of the best-known names in fashion look no further than New York City‘s Fifth Avenue, one of the most well-known and most expensive shopping streets in the world. The best Fifth Avenue shopping takes place between 39th and 60th Street with a mix of Prestigious shops such as Gucci, Louis Vuitton, Prada, Versace, Tiffany & Co and Saks, as well as world-class museums and Iconic landmarks such as the Empire State Building, Rockefeller Center and the famouse Apple flagship store.