Morocco Of My Dreams 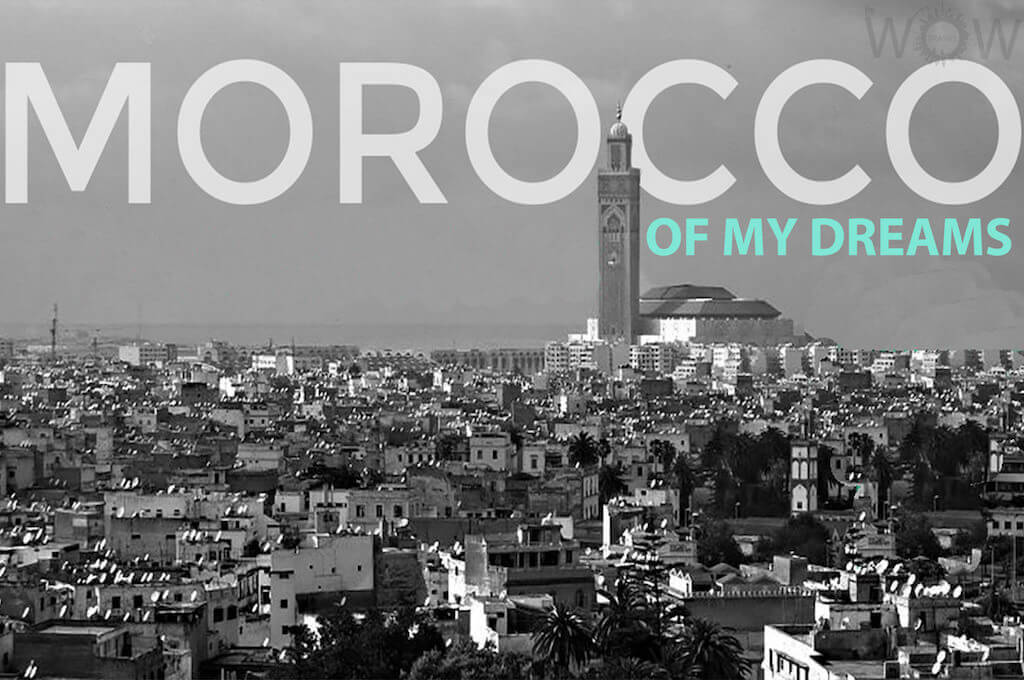 I lived my childhood under the impression that my family came from France. My French speaking grandmother Philomène would always pronounce our last name “Bytton” with a special flair and most people with our same last name lived in France so we just assumed it.

The moment I discovered my family was Moroccan my life changed and a new world appeared before my eyes. I started asking about this distant country which I had never even heard of at this point (9 years old); I started reading about it, looking at pictures and watching documentaries.

Morocco was now in my dreams. I tried to imagine what it looks like, smells, tastes, sounds, how people dress or speak. It took me 16 years to finally decide to buy a ticket and to go see it with my own eyes.

I spent 6 months planning this trip. I had studied every map, read every guide, talked to all my relatives and friends who were Moroccan or had been there. I even learned some new Moroccan Arabic phrases in case my French would not be enough.

Checklist: passport, Kiehl’s sunscreen, TEVA walking sandals, light clothes, a hat, Royal Air Maroc NYC- CASABLANCA ticket, a light yet spacious LowAlpine Rucksack and my best friend: my iPhone. With a Starbucks Veinti peppermint mocha Frappuccino in hand only 3610 miles separated me from the Morocco of my dreams. It was my first time in Africa and I did not know what to expect. As soon as I walked into Mohammed V International Airport, I heard people saying ahlan wa sahlan, ahlan wa sahlan (welcome in Arabic). All I said was “shoukran”, “merci” and people smiled. I felt great.

I had arranged for hotel transportation so right after the baggage claim I met Moustafa who warmly welcomed me and asked me; “wash kat’ref l’arbīya?” to which I responded: non, je suis désolé, je parle Français and that was how I met my first Moroccan friend.

Casablanca is the economic hub of Morocco and the largest of its cities with over 4 million people. It is also the commercial and industrial center and the main port of Morocco. It owes its name to the Portuguese sailors who used to travel by its coasts and see white houses and say “Casa Branca”.

On my way to the Hyatt Regency Casablanca we drove across the city which looked like it was frozen in the 50’s. The cars; the buildings; the commercial ads; public phone booths; everything. The typical French Café with tables and chairs all lined up outside facing the chaotic and noisy, yet fascinating streets. Important decisions and trivial conversations happened while others enjoyed a cigar or delicious pastries.

I was greeted by the concierge who offered me the traditional Moroccan mint tea and escorted me directly to my suite where I had a private hotel check-in. It was 10am already and the sun was shining so I was able to appreciate the magnificent views of the Atlantic Ocean, the old Medina and the Great Hassan II Mosque. 610-sq. foot suite with a deluxe king size bed, marble bath with tub and shower, high-speed internet; this was the best way to start my adventure in the Morocco of my dreams.

I spent 3 days in Dar Beïda, or as the locals call it Casablanca, I visited the colossal Hassan II Mosque which can host up to 25 000 people inside and 80 000 people in the outer yard. It took me 3 hours to visit and to contemplate its beauty; I used part of this time to plan the rest of my day. Right after, I had lunch at the Aïn Diab Beach.

Mahkama du Pacha is an interesting spot for architecture lovers, it is a gorgeous Hispanic & Moorish construction with approximately 60 decorated rooms all of them with wooden carved ceilings, tiled floors, stuccoes and more.

A Hammam (Turkish baths) is always a good idea to relax and interact with locals and learn more about their culture. Moroccans do it many times a day, sometimes to freshen up during hot summer days or before prayer time.

The Old Medina is a good afternoon activity, a typical walled part of the city to buy souvenirs, nothing like Fez or Marrakech, though.

The night calls for La Corniche, an ocean front boulevard with restaurants, nightclubs, hotels, all of which have definitely lived and seen better days.

The Sens, located on the 27th floor of the Kenzi Tower Hotel, offers a blend of modern and typical Moroccan food and the best panoramic view of Casablanca’s number one landmark, Hassan II Mosque. If you go up one more floor you will get to Sky28. All I can say is: great cocktails.

Morocco offers you a wide variety of places, as well as, natural and cultural landscapes: dunes, mountains, valleys and waterfalls for those who love hikes in the nature.

Morocco has an incredibly rich culture, lots of traditions and different customs. For example, the way of life of the Amazigh Berbers, inhabitants of northern Africa.

I also visited Rabat, Meknes, Fez, Tangier, Tetouan, Marrakech, Essaouira and Agadir; adventures I shall share with you soon.

I spent 1 month in Morocco which was one of the most amazing experiences of my life.