8 Most Amazing Obelisks In The World 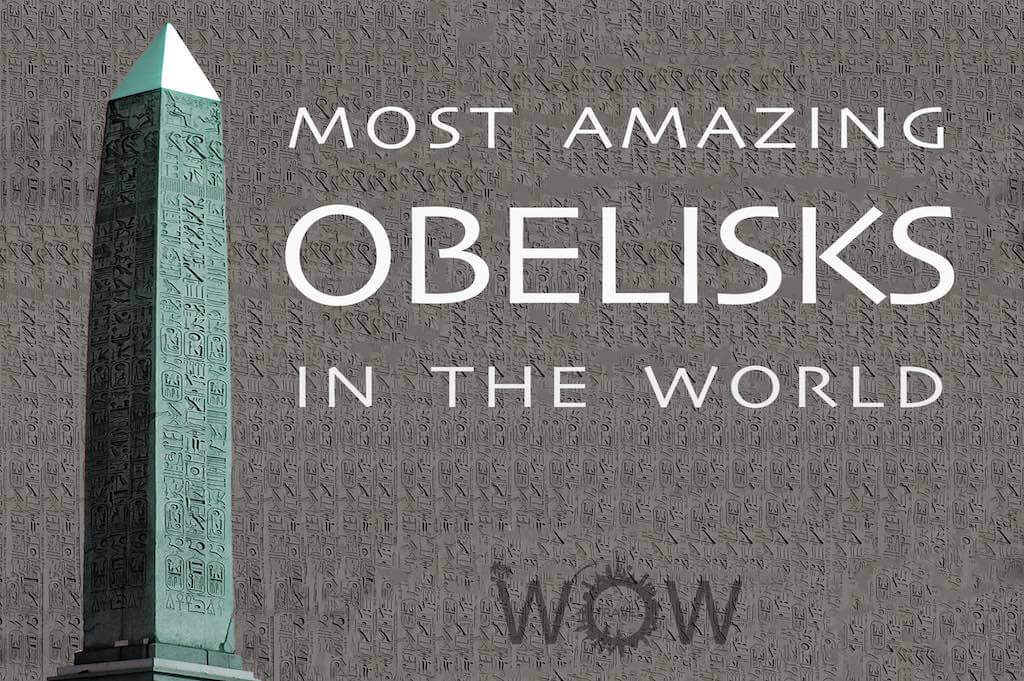 An obelisk is a monumental tapering column carved from a single block of stone, with a square (or rectangular) cross-section and capped with a pointed top called a pyramiding. These were originally called “tekhenu” by the builders, the Ancient Egyptians. The Greeks who saw them used the Greek ‘obeliskos’ to describe them, and this word passed into Latin and then English. Nowadays there are many obelisks standing around the world. 13 of them are in Rome (more than anywhere else in the world), while only 6 obelisks still reside in Egypt. Check out our list of the 8 Most Amazing Obelisks In The World.

Built of roughly cut stones, this imitation obelisk is situated near the Serpentine Column at the southern side of the Hippodrome of Constantinople in Istanbul. The Egyptian Obelisk is from the 15th century BC and was brought to Constantinople in the 4th Century AD by Emperor Theodosius. The walled obelisk is from the 10th century AD. It was originally covered by bronze, but this was also plundered by crusaders in 1204. We recommend staying at one of the 11 Best Hotels In Istanbul, Turkey nearby.

The highes and older obelisk still on in Rome, The Lateran Obelisk, is 37 meters (121 ft) high. It is made of red granite and was made during the reigns of Tutmosis III and Tutmosis IV.

Stands in the Plaza de la Republica, the Obelisco is 67 meters (220 ft) and it is Buenos Aires’ most famous monument. It was built to commemorate the fourth centenary of the first foundation of the city.

The Luxor Obelisk is over 22 meters (72 ft) tall, and was originally one of a pair of obelisks that were positioned outside the Luxor temple in Egypt, within the city of Thebes that is now known as Luxor. The monument was gifted to King Charles X by the Viceroy of Egypt, one of the twin obelisks marking the entrance to the Temple of Luxor (its double remains seated at the temple entrance). This particular Obelisk dates back over 3,300 years and is made of red granite, it has hieroglyphics from the Egyptians that depict the rule of Ramses II and Ramses III.

The Obelisk is located within the Srirangapatnam Fort. It was erected in 1907 AD by the Government of Mysore to commemorate the siege of Srirangapatnam by the British during the 4th century Mysore War. The structure was erected at the place where Tipu Sultan breathed his last, when he was trying to stop a British soldier from pulling his legendary sword from its sheath. Source: holidayiq

The Kingdom of Aksum was a trading nation in the area of Eritrea and northern Ethiopia , which existed from approximately 100 to 940 AD. The Axumites erected a number of large stelae, which served a religious purpose in pre-Christian times. The main Obelisk of Axum is supposedly 1,700 years old, 24 meters (79 ft) tall is made of granite, and weighs 160 tonnes. It is ornamented with two false doors at the base and features decorations resembling windows on all sides. Source: hiddenincatours

The Vatican Obelisk, is the only ancient Egyptian obelisk in Rome to have remained standing since Roman times. Little is known of its origins or which Pharaoh ordered its construction, but it was certainly quarried in Egypt and intended to be erected in Heliopolis. Sometime between 30 and 28 BC the red granite obelisk shows up in Alexandria under Augustus’s instructions to have it erected in the Julian Forum there. It was Gaius Caligula who had the obelisk bought to Rome in 37 AD. It was the largest non-inscribed obelisk to leave Egypt, at 25.5 meter (83 ft) high and weighing an estimated 326 tonnes. The obelisk was originally erected in gardens Caligula had inherited from his mother, and then on the central Spina of Caligula’s circus. Much of the circus is under under the basilica and square, the original spot for the obelisk is near the present-day sacristy, south of the basilica. Source: archaeology-travel