Top 11 Things To Do In Washington DC 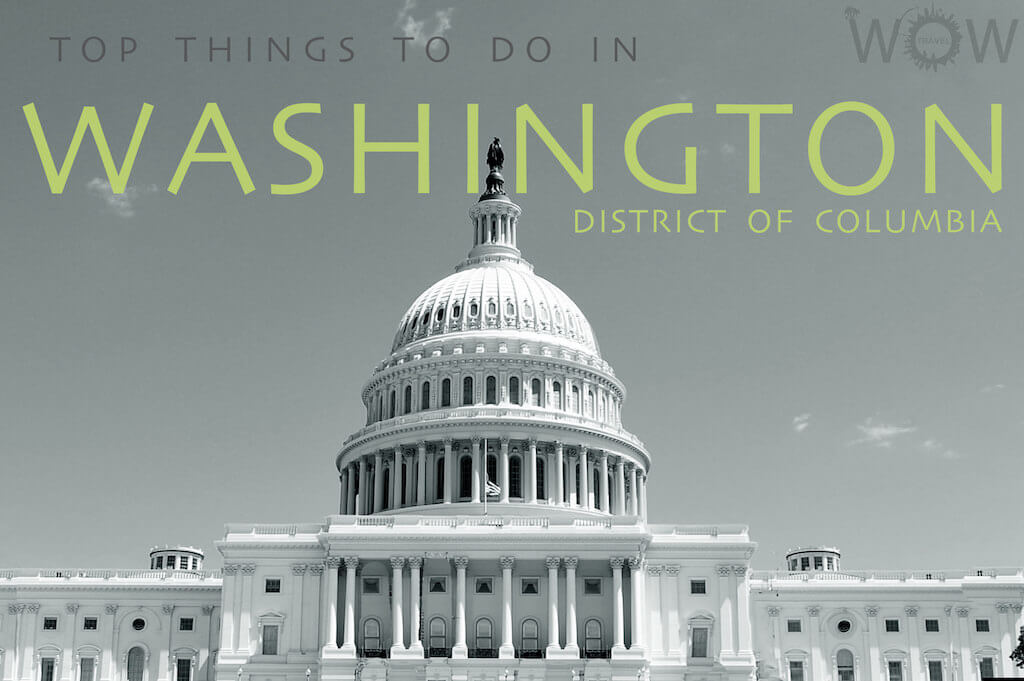 Washington, DC, the U.S. capital, is a compact federal district created specifically to be the seat of the US government, on the Potomac River, bordering the states of Maryland and Virginia. It is one of the most visited cities in the USA offers hundreds of interesting places to visit and things to do, and many of them are free. This vibrant city is home to great food, art, cultural attractions, historical monuments, museums, and government buildings. WOW Travel shares with you The Top 11 Things To Do In Washington DC.

The National Cathedral in Washington, DC is the 6th largest cathedral in the world, the 2nd largest in the United States and the highest as well as the fourth-tallest structure in Washington, D.C.. It is the home of the Episcopal Diocese of Washington and a place for spiritual enrichment and an architectural feat of stunning beauty. Whether you come for worship, a tour, concert, pilgrimage, or an insightful program, it is a place open to all.

Sits atop Capitol Hill, at the eastern end of the National Mall. The United States Capitol is among the most symbolically important and architecturally impressive buildings in the nation. It has housed the meeting chambers of the House of Representatives and the Senate for two centuries. The dome of the Capitol building was not added until the 1850’s. It took a total of 11 years to put the dome on top of the building. The U.S. Capitol has its own subway since 1909 and carries politicians from House and Senate office buildings to the Capitol. This base of the legislative branch includes 100 Senators (two from each state) and 435 members of the House of Representatives (based on the population in each state). The Senate meets in the north wing of the Capitol, and the House of Representatives meets in the south wing.

The museum’s primary mission is to advance and disseminate knowledge about the Holocaust, to preserve the memory of those who suffered, and to encourage visitors to reflect upon the moral and spiritual questions raised by the events of the Holocaust as well as their own responsibilities as citizens of a democracy. Everything about the museum is powerful; even the architecture was intentionally designed to give visitors a sense of life under the Nazis. The stark brick and limestone exterior is supposed to remind people of a German factory. Inside, James Freed’s design seems flawed: Rooms do not always have right angles, the windows are different sizes, the floor is fractured, and the interior brick walls are uneven in shape and color, as were the bricks used in the crematoria. Freed intentionally wanted to convey the sense of a world gone awry. Source: jewishvirtuallibrary

The White House is the official residence and principal workplace of the President of the United States, located at 1600 Pennsylvania Avenue NW in Washington, D.C.. For two hundred years, the White House has stood as a symbol of the Presidency, the United States government, and the American people. At various times in history, the White House has been known as the “President’s Palace,” the “President’s House,” and the “Executive Mansion.” President Theodore Roosevelt officially gave the White House its current name in 1901. There are 132 rooms, 32 bathrooms, and 6 levels to accommodate all the people who live in, work in, and visit the White House. There are also 412 doors, 147 windows, 28 fireplaces, 7 staircases, and 3 elevators.

Located north of the Lincoln Memorial near the intersection of 22nd St. and Constitution Ave. NW, Vietnam Veterans Memorial is free to visit and is open 24 hours a day. The memorial includes the names of over 58,000 servicemen and women who gave their lives in service in the Vietnam Conflict. The memorial also includes “The Three Servicemen” statue and the Vietnam Women’s Memorial.

The U Street Corridor is an historic and trendy area that runs for about 8 blocks between 17th Street and 9th Street in North West Washington. The U Street area is known in Washington, DC for its hip personality and eclectic attractions. There are many contemporary bars and nightclubs that are often frequented by college students and young professionals. The eclectic music scene found on the U Street Corridor is truly one of a kind. From the live Jazz clubs to the Indie Music and Punk Rock scene, you can hear any style of music under the sun as you walk through the streets of this vibrant DC neighborhood. The stylish restaurants and cafes, and the diverse people that spend their evenings there, make experiences on the U Street Corridor both exciting and enriching. Source: ustreetcorridor

Built in white stone with 36 iconic columns, The Lincoln Memorial is one of the most recognized structures in the United States. The memorial is at the west end of the National Mall, in West Potomac Park, and is an example in Neoclassical architecture. It features a solitary, 6 meter (19 ft) tall statue of Abraham Lincoln sitting in contemplation, which is flanked on both side chambers with inscriptions of Lincoln’s Second Inaugural Address and arguably his most famous speech, the Gettysburg Address. The National Park Service estimates that the memorial draws roughly six million visitors per year. Source: washington.org

Known as America’s first home, George Washington’s Mount Vernon Estate and Gardens, just outside of Washington, D.C, offers a glimpse into 18th-century plantation life through beautiful gardens and grounds, intriguing museum exhibits, and immersive programs honoring George Washington’s life and legacy. Explore the state-of-the-art galleries and theaters, visit the 500-acre estate of George Washington and his family, and tour the 14-room mansion that is beautifully restored and furnished with original objects dating back to the 1740s.

Welcome to charming, bustling Georgetown. A nationally-designated historic district, Georgetown was founded in 1751, nearly half a century before the District of Columbia, as a bustling port city on the banks of the Potomac. Today Georgetown is a neighborhood with a vibrant business district, an active residential community, and a popular recreational waterfront. It is D.C.’s premier destination and ‘playground’ for shopping, dining, history, fitness, and family fun. Georgetown offers a variety of 450+ shopping, dining and entertainment options in a beautiful, historic setting. M Street, Georgetown’s main avenue, is recognized as one of the best shopping streets in the country. The intersection of M and Wisconsin Avenue is the heart of Georgetown, with boutique-lined streets extending in all four directions. Known for its quaint cobblestone streets and 18th and 19th-century architecture, the neighborhood is a delightful mix of past and present that sets it apart from the rest of Washington, D.C. Planning to visit? We recommend staying at one of the 11 Best Hotels in Georgetown. Source: georgetowndc

On the Potomac River within eyesight of Washington, DC, Alexandria, VA is nationally recognized for its rich history and beautifully preserved 18th and 19th century architecture – an extraordinary backdrop for acclaimed, chef-driven restaurants; a thriving boutique scene; vibrant arts and culture; and a welcoming, walkable lifestyle. Alexandria is the relaxed and refined home base for your DC vacation and an unforgettable getaway of its own. Today Old Town’s cobblestone streets and red brick sidewalks hum with an energy that attracts everyone from presidents to pet lovers to some of the city’s best restaurants, arts events, shopping and historic attractions. Speaking of pets, the city is home to our Top 11 Pet Friendly Hotels In Washington DC. Source: visitalexandriava