Top 10 Things To Do In Vietnam 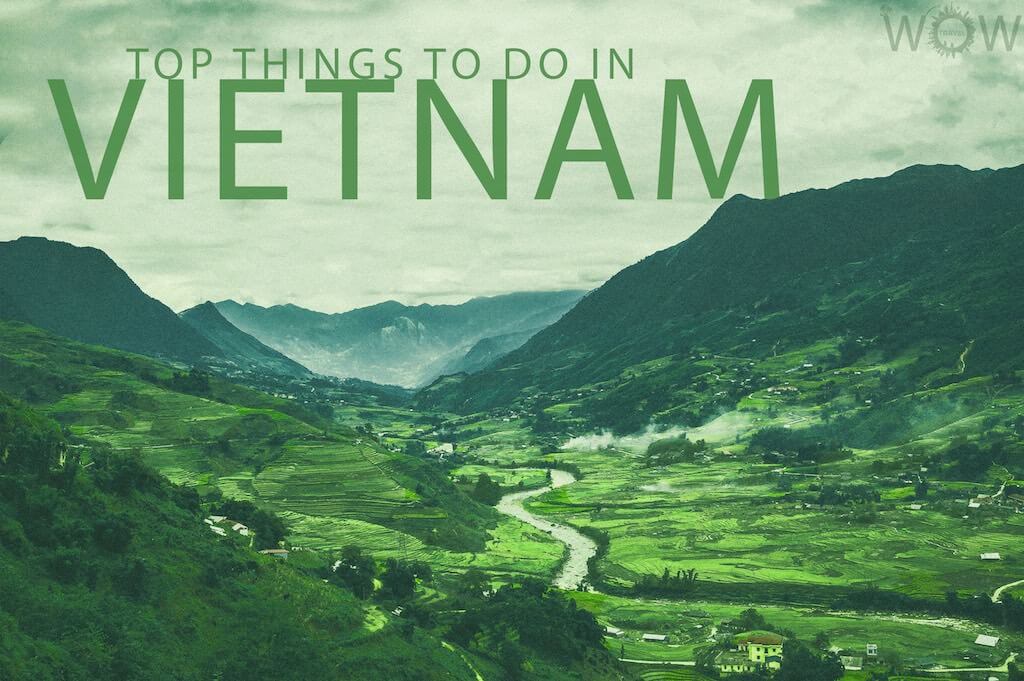 Located in Southeast Asia, Vietnam is an incredibly exotic and unbelievably exciting country to visit, known for its wild jungles, beaches, rivers, floating markets, Buddhist pagodas, historical ruins, and bustling cities. Vietnam deserves to be on every traveler’s hit list. The list below of the Top 10 Things to Do In Vietnam will take you all the way from the buzz of Ho Chi Minh City to the relaxed charm of Hanoi, the eye-popping scenery of Halong Bay to the bustle of the Mekong Delta and the ethnic diversity of SaPa.

Mũi Né is a resort town along the South China Sea, about 5 hours from Ho Chi Minh City. The clear palm-lined beach and calm atmosphere are incomparable, and there are plenty of beach resorts available too. Make sure to visit the Fairy Creek and sample some of the local seafood dishes.

Lies along the East Sea with a population of 400,000, Nha Trang is Vietnam’s most famous seaside resort-town. It’s also the scuba diving center of Vietnam. Nha Trang possesses many islands, beautiful beaches, coastal climate, and sunshine. The ideal time to visit is between May to August.

Located in Quáng Ninh province in the Gulf of Tonkin, Halong Bay is one of the world’s natural wonders, and is the most beautiful tourist destination of Vietnam. It features some 1,600 islands and islets, forming a spectacular seascape of limestone pillars of various sizes and shapes along the 120 km (75 miles) coastline of Bai Chay Beach. Several of the islands are hollow, with enormous caves, other support floating villages of fishermen, who ply the shallow waters for 200 species of fish and 450 different kinds of mollusks.

Perched on the banks of the Saigon River and still known as Saigon to its eight million inhabitants, Ho Chi Minh City is the largest city in Vietnam and the former capital of Vietnam. Ho Chi Minh City has changed its image from that of a war-torn city to one of a thriving metropolis, challenging Singapore, Bangkok and the other traditional Southeast Asian powerhouses. Thronging with motorbikes, marketplaces and well-preserved colonial structures as well as gleaming skyscrapers, and modern shopping malls. As the biggest commercial hub of Vietnam, Ho Chi Minh City has a special vibe that pulsates and refuses to rest. Thanks to its complex blend of different cultures, historical traits and Western influences, the city offers a mix of architecture, culture and street life that will at times fascinate and at other times thrill. For a taste of modern Vietnamese city life, head to Ben Thanh, an enormous covered market in the city center.

Situated in northern Vietnam on the western bank of the Red River, Hanoi is the capital of Vietnam and its heart and soul. Hanoi is a charming city with a unique blend of colonial and pre-colonial architecture, famous lakes, various temples and pagodas, local shows, iconic markets, historical and cultural museums, flourishing arts scene, concerts, and sophisticated nightlife. Located in the historical center of Hanoi is the famous Hoan Kiem Lake, it is one of the major scenic spots in the city and serves as the locals’ favorite leisure spot. Make your visit unforgettable by staying at the best hotels in Hanoi.

Off the coast of Cambodia in the Gulf of Thailand is Phu Quoc, the largest island in Vietnam and a tropical paradise of peace and romance. It boasts pristine tropical forests, the nicest beaches in Vietnam and wonderful underwater activities with untouched coral reefs. Read more about them on things to do in Phu Quoc.

The Mekong Delta is the region in southwestern Vietnam where the Mekong River approaches and empties into the sea through a network of distributaries. It is a vast maze of rivers, swamps and islands, home to floating markets, pagodas and villages surrounded by rice paddies. A tour to the Mekong Delta will give you a glimpse of how village life revolves around the river. Winding its way through 6 countries, over an incredible 4,350 km, the mighty Mekong River is the lifeline of South East Asia and the sprawling Mekong Delta forms the heartland of southern Vietnam. From its source in the Jifu Mountains of Tibet, it runs through China, Myanmar, Thailand, Laos, Cambodia and Vietnam.

Sapa is located in Lao Cai province, 350 km (218 miles) from Hanoi, close to the border with China. Sapa’s remarkable mountainous scenery is home to several hill tribe villages where life continues pretty much unchanged with a diversity of ethnic people. The Real Sapa Experience is particularly attractive for trekkers and adventure travelers searching for unique local cultures, exploration activities and uncommon landscapes.

Whether you are looking for tranquil beaches, chaotic markets, or peaceful rivers that run alongside historic towns, Hoi An has it all. Unlike the insanity of Hanoi and Saigon, you can stroll the streets in the old district without having to worry about the motorbikes that flood the big cities and make crossing streets there more nerve-racking than walking a tightrope over lava. Hoi An also has Vietnam’s tastiest cuisine, like white rose shrimp dumplings, fried wontons, and the thick-noodled cao lao. Lastly, it’s the city for inexpensive, quality, tailored suits and dresses. Source: somewhereorbust

Hue is an imperial city that was built in 1687 and became the capital of Vietnam under the Nguyen Dynasty. During that time it was the cultural, religious and economic center of Vietnam. Discover its history and its amazing monuments recognized as a UNESCO World Cultural Heritage Site. This unique city of Vietnam has kept its form from the Middle Age and the monarchic constructions which makes Hue a city-museum invaluable. The first place is Imperial City with many gates of the fortress, including the famous forbidden Gate of the Noon and many temples and worship places inside the City. Another notable place is the complex of the tomb of Nguyen emperors, including Gia Long Tomb, Tu Duc Tomb, Minh Mang Tomb, Dong Khanh Tomb, Khai Dinh Tomb. Nevertheless, Thien Mu pagoda is a hot spot of Hue, like One-pillar pagoda in Hanoi. Visiting Hue is synonymous with finding way back to old times. Source: vietnamonline